QUOTE OF THE DAY, 1907: Those Newfangled Skipjacks “Are as Cheap as Anything in the Form of a Boat Could Be.”

Home / Way Back Machine / QUOTE OF THE DAY, 1907: Those Newfangled Skipjacks “Are as Cheap as Anything in the Form of a Boat Could Be.”

Back in 1907, the Baltimore Sun published an essay lamenting the disappearance of an old sailing vessel called the pungy from the Chesapeake Bay sailing fleet. The business of oystering was in transition in those years, and the pungy was a bad fit for the new way of doing things.

With the infamous Oyster Wars well under way, watermen were looking for vessels that could get them up into the nooks and crannies of narrow rivers, away from the eyes of law enforcement. The crab business was just starting to pick up in those days as well–and that, too, meant working in shallow waters. The pungy’s strength was working in deeper water.

The new-fangled arrivals that pushed the pungys off to the sidelines were called bugeyes and skipjacks. The skipjack, in particular, comes in for sharp criticism in the article, which is titled, “Exit the Oyster Pungy. Enter the Ugly Bugeye.”

Below are few excerpts. Here is the full article.

If every ship has, like Kipling’s, a voice, the Chesapeake hears many a melancholy story as the pungies-those gallant little schooners so many years one of the bay’s features-confide to each other the stories of their battles with the gales, their labors on the oyster beds and man’s ingratitude.

Their day has passed.

Always they were boats for sailors, and not for owners. “No pungy,” say the old watermen, “was ever lost except by bad management.” 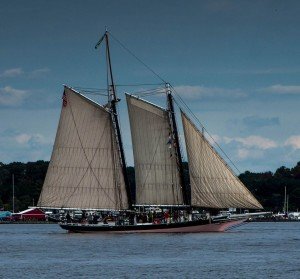 But the men who look for profit answer: “A pungy is all keel and no hold. She can’t carry much more than a common freight car. Her after body is cut away until there is nothing of it. It’s all right for a vessel to be seaworthy and clever and smart to look at, but she must earn her living.”

So pungies are built no more. Those which are still in service need frequent repairs. Over them comes the look of age. New paint will not conceal the wrinkles and scars.

… [T]he dredgers have gone to the flat-bottomed bateau, or skipjack, a cheap and cheaply handled craft, and the bugeye, a large canoe, … carefully built and rigged, from 15 to 20 tons register, drawing 5 or 6 feet, and, though a wet boat in rough weather, capable of venturing into the coasting trade.

“Forty years ago,” the master of a yard said, as he sat on a pile of two-inch boards and gossiped, “we shipbuilders on this side of the bay made money, but weren’t proud. We built nothing bigger than a pungy or a topmast schooner. Now we think more of ourselves, but all we make is out of repair work.

“There ain’t any more shipbuilders except us few old ones. I haven’t seen a keel for a pungy laid in 25 years. She’s too long-legged for the way they run the oyster business. It’s all canoes, bugeyes and bateaux.

“I don’t deny that there’s some art about a bugeye, but it ain’t shipbuilding. I never tried to learn it much. A bateau [or skipjack]-any jackleg carpenter can build one. Them oystermen can all use tools a little and many of them can knock together a skipjack in their front yards. It’s got no model, no lines, no nothin’, except a few boards and a cheap lot of riggin’.” 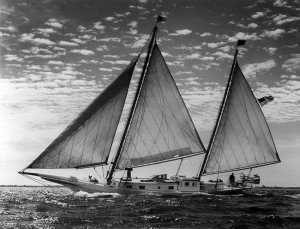 “For a business boat a pungy is the sweetest model ever invented. … She sits in the water saucy as you please. She can go anywhere and be safe, except in a shoal river, and that’s what’s killed her. A 130-ton pungy is about as big as they used to build, and she would draw 12 feet.”

“That draft won’t do for a shallow river or for shoal water on the oyster rocks. In these times oysters are scarce and they have to get ’em where they can.”

“And, then, you can’t steal oysters unless you can cut into shallow water at night to dodge the police boats.”

“No, I don’t look for any change. … [F]or oysterin’ and crabbin’ it’s goin’ to be canoes, bugeyes and bateaux.”

What the old shipbuilder calls bateaux, skipjacks and skiffs are the most notable development in Chesapeake water. They have all come within a few years, and have come with a rush. They are a growth from the common skiff, and they are built up to 60 feet long, though the favorite seems to be about 40 feet.

Hooper’s Island has a reputation for sending out the best. They are as cheap as anything in the form of a boat could be, … the real poor man’s boat.

• The photo up top is of skipjacks competing in the annual Choptank Heritage Skipjack Race. It’s by Jill Jasuta Photography, and it’s available as a panoramic photo print over in the Shore Store. It’s also available as a curved metal print and as a greeting card.

• You can learn about the pungy from these few paragraphs on Wikipedia. The Lady Maryland is replica pungy that sails out of Baltimore on educational voyages with the nonprofit Living Classrooms. A picture of here appears within the article here.

• The Last Skipjacks Project traces the status and all kinds of interesting facts about the skipjacks that still survive here in the 21st century.

• I found the article quoted above at the online home of “The Countryside Transformed: The Railroad and the Eastern Shore of Virginia, 1870-1935,” which is a collaborative effort of the Eastern Shore Public Library and the Virginia Center for Digital History of the University of Virginia. Here again is the complete version of the article.