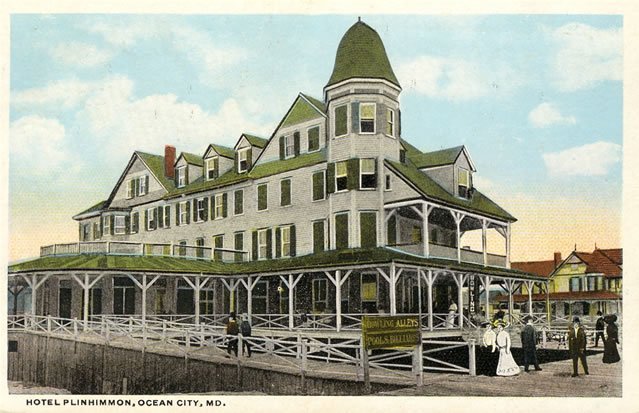 QUOTE OF THE DAY: The Saintly Mr. Ijams of Ocean City

Home / Way Back Machine / Quote of the Day / QUOTE OF THE DAY: The Saintly Mr. Ijams of Ocean City

Here is a heartwarming item from yesteryear. In the 1920s, the manager of the gorgeous Plimhimmon Hotel in Ocean City, the saintly Mr. Ijams, invited an orphanage full of girls down for two weeks at the beach every July. One of those girls, Polly Ross, reminisced later in life about those days at the beach in an essay that I found on the website of the Ocean City Life-Saving Museum. Polly wrote the essay in 1989. Here it is:

From 1925 to 1930 we little girls in the orphanage in Easton, Maryland looked forward to July when we knew Mr. Ijams would invite all forty of us to be his guest for about two weeks in the Plimhimmon Hotel in Ocean City, Maryland

We were never treated as orphans, but as paying patrons. We came into the dining room an hour early. After dining we sat back and sang for Mr. Ijams and his guests. It was a good thing God had blessed us with musical ability, because whenever we went down the boardwalk we attracted a lot of attention. We were all dressed alike in bloomers and middy blouses. People would pop out of shops saying they would treat us if we would sing.

We sang for salt-water taffy, popcorn, rides on the merry-go-rounds and even the rented bathing suits. We all loved the ocean, especially the ropes to which we clung while jumping up and down over the waves. The ropes were called “fanny wetters” because that was about all that got wet. The bathing suits worn then were not at all like the bikini of today. No flesh to our eyebrows. Our bathing shoes were high-topped canvas reaching almost to our knees. We didn’t care. We did have as much fun as others living out in the world.

Many times I would get up early, go out on the boardwalk and sit on a bench facing the ocean. How refreshing it was to be so close to God, sitting there so early in the morning, filling my little girl’s heart and soul with the beauty of Ocean City, Maryland.

Isn’t that the sweetest thing? The page where I found the story is no longer there, but there is lots of stuff on interest on the website of the Ocean City Life-Saving Museum if you are in the mood for online wandering.

The Plimhimmon was located on the ocean near 2nd Street. It burned in November of 1962. There is a photo here of that sad occasion. The Plim Plaza hotel is there today–in fact, it has a replica of the beautiful old cupola on the original hotel.

You can read the fascinating story of how the Plimhimmon Hotel came into existence here–it involves an impoverished single mother trying to make her way through a fast-changing world.