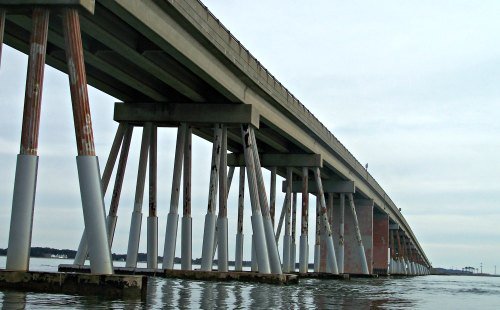 From the BooksQuote of the Day

QUOTE OF THE DAY: A ‘Monument to Man’s Stupidity’ at the Hooper’s Island Bridge

Home / Way Back Machine / Quote of the Day / QUOTE OF THE DAY: A ‘Monument to Man’s Stupidity’ at the Hooper’s Island Bridge

This excerpt from Eastern Shore Road Trips #2: 26 MORE One-Day Adventures on Delmarva is a bonus section that comes at the end of a road trip chock full of backroads adventuring through remote South Dorchester County, Md. and out to remote Taylors Island and Hoopers Island.

The story of how the modern Hoopers Island bridge came into existence is a tale of politics and bureaucracy. Before 1980, the crossing from Upper Hoopers to Middle Hoopers was a one-lane affair on a low wooden bridge with a draw in the middle so boats could get by and an itty-bitty pull-off area so vehicles coming in opposite directions could pass each other. This is how the writer Tom Horton describes that earlier bridge in his book, Bay Country.

[It is] the longest, narrowest, clatteringest old wooden bridge in Maryland, and no matter how far you’ve come, crossing it is the most memorable part of your trip.

Horton recalls making that crossing himself as a newly licensed young driver. The nerve-racking ordeal involved navigating through a gauntlet of

… summer crabbers who bend unconcernedly over both railings, giving no quarter as they lean to dip crustaceans flippering on the tide. Somehow, no hind ends ever were fractured there, although a couple of windshields were sharded by the long, wooden handles of crab nets.

This may sound problematic, but with a population of less than 500 and a daily travel volume of 250 vehicles, it’s not like the old Hoopers Island bridge was causing traffic jams. Then, in the 1970s, the possibility of progress came calling in the form of an opportunity to have federal funds cover most of the cost of replacing the “clatteringest” bridge.

To be fair, it was time for a new bridge. One commenter on the Secrets of the Eastern Shore website recalled how the old bridge was sometimes under water at high tide. There were worries about the stability of its aging wooden timbers, too–it got to a point where school buses no longer made the crossing. Instead, children from Middle Hoopers Island were taken across in small groups, where a full bus would be waiting for them on the Lower Hoopers side. 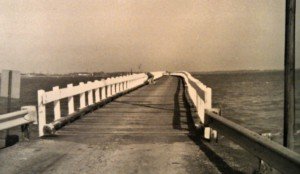 Initial estimates on that new bridge came in at $500,000, which meant that just $125,00 would be due from local coffers in Dorchester County. That original concept involved building a bridge not so different from the one that was already there, just more stable, more reliable at high tide, and perhaps even paved.

But in taking the deal for that federal grant money, the county also ceded design control over the project to federal engineers. They were the ones who insisted on an over-the-top design that tried to account for every possible future risk. The feds wanted the bridge to soar to a peak of 35 feet above the water. They brushed aside pleas to leave the old wooden bridge standing out there so local folks could keep on using it for fishing and crabbing.

A slew of other technical bells and whistles got added in by those federal engineers, too, sending the price tag soaring from $500,000 to more than $3.5 million, seven times higher than the original estimate. In the end, the county was on the hook not for $125,000, but for $900,000. They could have saved a bundle by never taking that federal grant money at all. 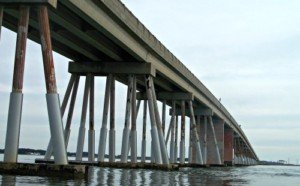 All of which brings us to Tom Flowers, a Hoopers Island native who enjoyed a distinguished career as a local educator and politician. Flowers was also renowned as a great Eastern Shore storyteller. He dubbed himself “The Old Honker” while spinning yarns at public appearances and in newspaper columns.

On Sept. 6, 1980, County Commissioner Flowers was invited to give the invocation at a ceremony marking the completion of the new Hoopers Island bridge. What he said before the crowd of local politicians, big-wig state bureaucrats, and other VIPs that day ended up getting attention from newspapers and TV stations all over the country.

Here is the blessing he offered up:

Father, today we are gathered here to dedicate a bridge that is a monument to man’s stupidity, a monument to man’s waste, a monument to government interference and inefficiency. For there is no need for such an elaborate structure as this is and which is so out of keeping in the peaceful and lovely environment of south Dorchester.

We, the County Commissioners, State and Local officials, and other guests should this day learn a lesson and be aware of the great waste of taxpayers’ money–over $3 million; we should this day be aware of the loss of resources that our own children and grandchildren will suffer … but we can, however, rejoice that our community’s need for a safe bridge has been admirably and efficiently completed through the dedication and hard work of the McLean Construction Company personnel. 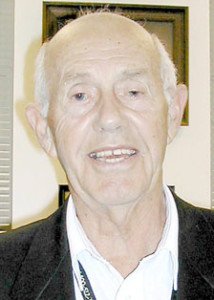 We ask our great Creator and Father to bless this bridge [and] our families, our friends, and our visitors who will use this structure to meet their needs, knowing that wind and wave and tide are daily at work destroying that which has been built. In the name of Jesus, Our Father, Amen.

Later, in his book, Shore Folklore, Flowers expressed astonishment over what happened in the aftermath of his remarks.

It is difficult to believe that four sentences spoke by me in an invocation at the dedication of the Narrows Ferry bridge before twenty-some people in a remote rural area could travel around the world; be read before a national audience by Walter Cronkite; be published in the Honolulu Advertiser, The New York Times, Los Angeles Times, People magazine; and initiate people from nearly every state in the Union to send letters of praise to the speaker.

–Posted by Jim Duffy in 2019 and updated in 2022. Copyright Secrets of the Eastern Shore/Whimbrel Creations LLC. All rights reserved.