The Life Saver on Cambridge Creek, 1920

Home / Way Back Machine / Quote of the Day / The Life Saver on Cambridge Creek, 1920

A few years back, a man named Russell Spear came across the text of an old news account about the day his late grandfather played the role of life saver on Cambridge Creek by rescuing two little girls who fell through the ice one day in January of 1920. He decided to share that story of heroism on a Facebook page devoted to Cambridge Memories.

This is the newspaper excerpt he posted:

Clarence L. Spear saved Oneita E. Hubbard from drowning
Cambridge, Maryland, January 11, 1920.
Oneita, 9, broke through thin ice and fell into Cambridge Creek 150 feet from the bank, where the water was 10 feet deep. Spear, 34, [an] automobile mechanic, skated to a point 10 feet from the hole, lay on the ice, and slid about eight feet; he then broke through and went slightly under the surface. He rose and took hold of Oneita, but she crawled upon his shoulders, causing both to go under the surface twice. Supporting Oneita, Spear trod water until a boat was brought over the ice to them, and Oneita was lifted into it. Spear was drawn up on the ice by a rope.

There is more to the story of the miracle Clarence Spear performed that day. Actually, three children had fallen through the ice near the foot of Muir Street. The spot was near a sewage discharge pipe that apparently warmed up the water underneath the ice. After Oneida had climbed up onto his shoulder, Spear turned his attention to little Mildred Lyons, grabbing hold of her hair and refusing to let go.

Spear screamed over and over again for the third child to grab onto his coat and hang on, but sadly, Benjamin Lyons lost his grip and went under. The frenzied scene that afternoon nearly cascaded into further catastrophe, according to the Daily Banner:

While the excitement was at its height, owing to so many crowding around the place, the ice broke [in additional places], and quite a number [of other people] were thrown in. They were all rescued.

Back here in modern times, a woman named Allison Bramble Marshall saw the story that Russell Spear had posted on Facebook and chimed in with this comment:

I’m the great granddaughter of Oneita! She is still living and will be 106 this September. I have never heard this story but thank God for people like him! 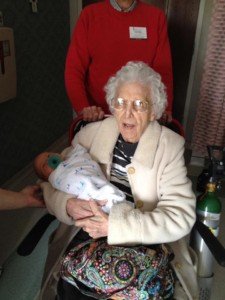 Allison posted the photo of Oneita McCall that you see here. She is holding a great-great-grandchild who never would have made it into the world if Clarence Spear hadn’t played the role of life saver on Cambridge Creek that day in 1920. I am sorry to report that Oneita passed away shortly after that exchange, in the summer of 2017. Here is her obituary. May she rest in peace.

Since a first and much shorter version of this story went up, I have also heard from Barbara Morris, the granddaughter of Mildred Lyons. She said that she felt inspired to share the story with one of Clarence Spear’s descendants, a Cambridge contractor (and friend of mine) named Branden Spear.

I also heard from Doris Lyons whose mother-in-law was a sister of Benjamin and Mildred. She relayed a scene of heartbreaking sadness that had been passed down as family lore. Benjamin’s father, Oscar Lyons, worked in a nearby shipyard. He had injured one arm at that workplace so badly that it had become permanently useless. Upon hearing that Benjamin was lost and presumed drowned, Oscar got out a pair of oyster tongs and joined (even with that dead arm) in the search for his son’s body.

Later, the family took out an ad in the Cambridge Daily Banner:

We desire to publically express our deepfelt thanks for the many kindnesses shown and offered us during our recent bereavement. We thank those who worked to heroically to save our precious boy and all others who in any way assisted.

As to the life saver, Clarence Spear, he was awarded a big national Carnegie Hero award for his actions. He died in his late 50s, suffering a heart attack on a February day in 1942 while trying to control a grass fire at his farm in the Neck District outside of Cambridge.

There is one more twist to the story. On the website of the Carnegie Hero Fund, which is still going today, there is a story about a granddaughter of Spear’s, Shirley Spear Reed of Severn, Md. She was born eight years after his death, but became curious about her family’s history as she got older. She had no idea about her granddad’s heroics until finding her way to the website of the Carnegie Hero Fund. This inspired her to have a bronze marker created commemorating her grandfather’s Carnegie-winning heroics and attached it to his gravestone in Dorchester Memorial Park.

Upon on that Carnegie website, here is what family legend told Ms. Reed about Clarence:

“Reed said that in addition to being a mechanic, Spear farmed, growing corn, tomatoes, kale, collard greens, and other crops that he sold to local markets. He once met Annie Oakley, the famous sharpshooter, who showed him her techniques. They were passed down through the family to Reed herself when she learned to shoot as a teenager.”

The timing works, actually. Annie Oakley lived in Cambridge for a few years starting in 1912. I have a story up here about that, too.

What amazes me about this story is not just the heroics of Clarence Spear, but way is cascaded down through generations that followed and the way it keeps echoing among descendants as they discover the story of that day. It leaves me with an image of little Benjamin Lyons and elderly Oneita McCall and Mildred Lyons, all gathered up in heaven next to Clarence Spear, telling stories on the impact that day had across so many decades.