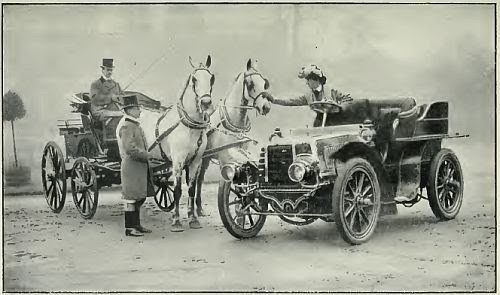 QUOTE OF THE DAY: “Ladies would not go out in their carriages” if “that horse frightening machine” was on the road …

By Secrets of the Eastern ShoreJanuary 21, 2019No Comments

Home / Way Back Machine / Quote of the Day / QUOTE OF THE DAY: “Ladies would not go out in their carriages” if “that horse frightening machine” was on the road …

Some people had seen horseless carriages, called automobiles, on visits to the city and a few were aspiring to own one early in the century. The first one was owned by Claude Nottingham of Onancock about 1906. It has been said that ladies would not go out in their carriages until the said Nottingham was consulted to see if he expected to use that horse frightening machine that day. …

Through the year 1910, the purchase of an automobile, usually made in Balitmore and brought home by steamboat, was news for the papers. … On March 17, 1906, the General Assembly approved an Act for operating automobiles. … The rate of speed was fixed at fifteen miles per hour in the open country and eight miles per hour for going around curves, up and down hills, and in villages, towns, or cities.

If the horseless carriage driver wished to pass an animal-drawn vehicle, he was to give the signal by a bell, gong or horn and passing speed was not to exceed four miles per hour. If the animal became frightened, the driver was to get out and hold it until it became quiet, then drive his automobile past it.

Fines from $10 to $100 were imposed for failure to obey these rules.