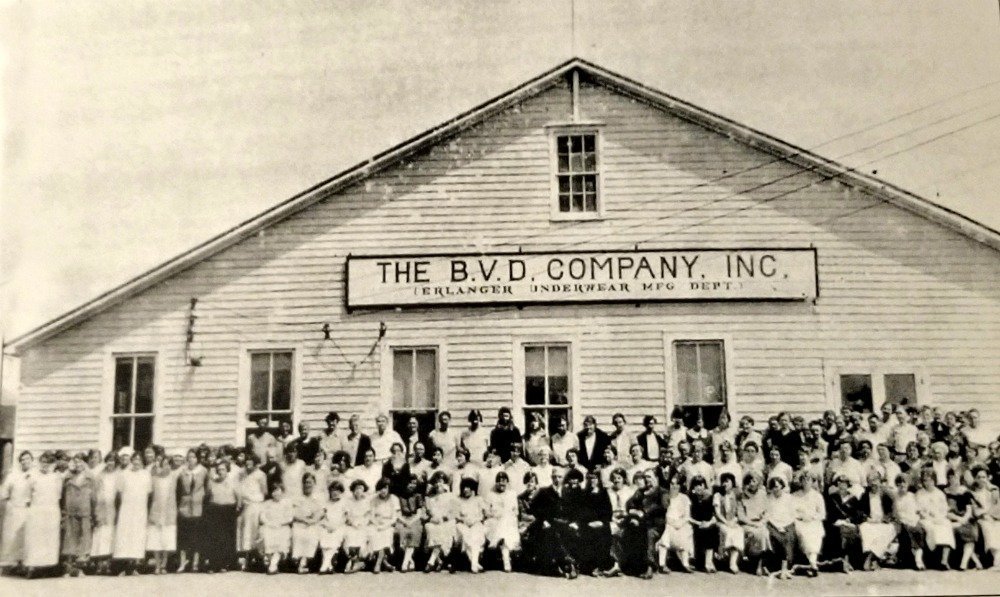 QUOTE OF THE DAY: The Heyday of Garment Factories in Crisfield, Maryland

Home / Way Back Machine / QUOTE OF THE DAY: The Heyday of Garment Factories in Crisfield, Maryland

That old saying about how the more things change, the more they stay the same popped into my head when I went looking for a little background info to go with a cool photo of an old B.V.D. underwear plant, one of several old garment factories in Crisfield, Md.

We’ve all heard about modern-day clothing and shoe companies that find their way to far-flung places in Asia and Africa where labor costs are lower and regulations aren’t as strict or costly. Remember how Nike got in all kinds of public relations hot water over making products in overseas “sweatshops?”

That same sort of thing was going on at the turn of the 20th century, only back then it was small towns in places like the Delmarva Peninsula that played the modern-day role of undeveloped countries. Big-city labor unions were just starting to flex a little muscle in the 1890s. They succeeded in driving up garment-industry wages by a notch or two while also demanding improvements to working conditions.

The companies felt that these steps posed too great a risk to the razor-thin profit margins that have always characterized the clothing trade. They went looking for places where labor costs weren’t going up and new rules wouldn’t get in the way. That led them to places like Crisfield, a waterfront town that sits at the mouth of Daugherty Creek and within sight of Tangier Sound.

Crisfield’s main claim to fame in Delmarva lore is mostly a matter of oystering and crabbing. The garment-factory chapter in its story doesn’t get nearly as much attention. The town’s first clothing factory was a coat maker, The Crisfield Manufacturing Company. A branch operation of a larger firm, L. Grief & Co., it was established on Main Street during the early 1890s. A few years later, in 1898, the Horsey factory started up a shirt-making operation on Third Street. In 1919, founder I. Purnell Horsey sold out to the Erlanger Company, at which point the facility became known as the Crisfield B.V.D. factory. 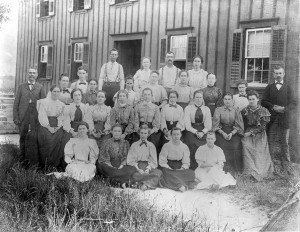 The Douglass and White Shirt Factory in Milton, Delaware

The picture up top here shows that factory building with a group of its workers standing out front. It’s probably from around 1930. These were not small operations. At its height, the B.V.D. factory had more than 100 workers. Later, in 1939, it was sold to a company called Rosenbloom, Inc., which made uniforms for the armed forces. Another company—this one with the entertaining name of His Nibs—made pajamas there in the postwar years.

Alas, the building is no more. It was destroyed by fire in the late 1950s.

Other garment factories operated here as well. There was a big one on Mariners Road and another on Maryland Avenue and a yet another on Locust Street. According to a brief history of the industry’s heyday published in the Crisfield Times in 1972, these factories provided employment for more than 500 locals, most of them women who didn’t have very many other job opportunities available to them in those days.

That same article ends with a really fun twist, in which the unnamed author ties the history of the clothing factories with the lifestyles of the more celebrated local watermen.

For many years Crisfield garment factories were economic blessings to families with low incomes and for women for whom no other employment existed. During the days before social security and various welfare benefits, the old and the handicapped had “tough sledding” indeed. There were many instances where the women folk of the family were the only breadwinners, especially if the mother was a widow or the father was incapacitated.

On the other hand, from time immemorial some watermen of the area crabbed during the summer months and “holed up” during the winter while their wives and daughters worked every day at one of the factories to support the families.

These watermen emerged from their “hibernation” each week day to exchange gossip brought home from the factories by their wives and to engage in a battle of words to solve the world’s problems around the hot stove of a country store. During these months the wife made the living, did the cooking, performed the house work, raised the children and made the home her husband’s “castle.”

In only a few isolated instances does this condition still exist, but there are still old timers around who refer to those years as the “good old days.”

The last garment factory in Crisfield shut down in the early 1970s. By then, the industry’s shift to overseas manufacturing was well under way.

I know that lots of other Delmarva towns had garment factories in the 20th century. Here, for instance, is a brief piece about the industry’s history in Milton, Del. Someday I hope to try and look into this topic in more detail, so if you know the name of or stories about an old factory in your town, let me know in the comments. I’ll keep a list for that day when I get a chance to start hunting around.

• You can read the full 1972 article from the Crisfield Times here in a PDF format. (Oddly, it is posted on the web archives of the New Brunswick, N.J. Free Public Library.)

• If you do go over to read that old article, I suspect you may also be interested to read over the sweet “Christmas Message to Smith Island” that is up at the top right of the newspaper page.