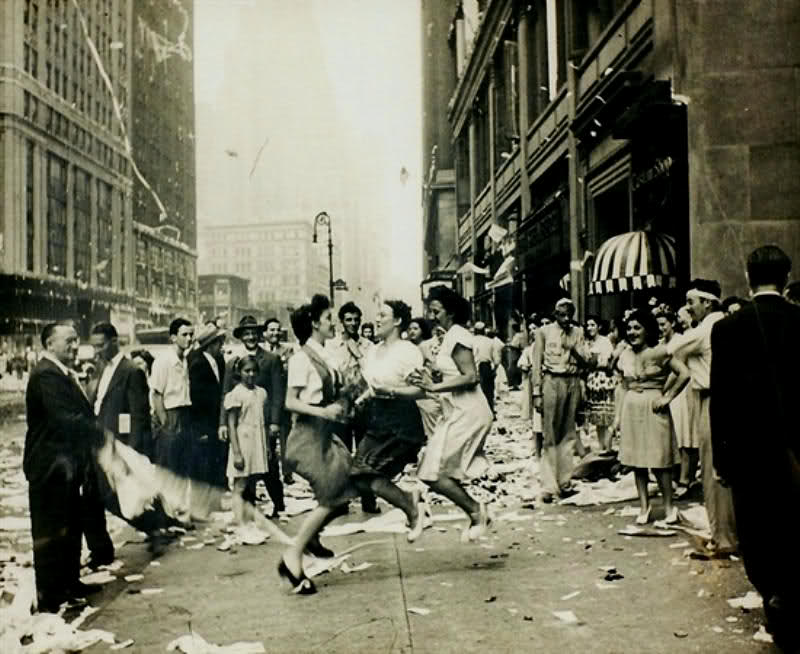 The scene on VJ Day in Easton–the night of Aug. 14, 1945–must have been something to behold, judging from this description by the historian Dickson J. Preston in Talbot County: A History. 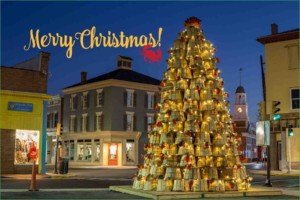 In Easton, as everywhere in America, there was jubilation. People rushed into the streets, laughing, shouting, waving flags. Many jumped into their cars and started driving, somewhere—anywhere—honking their horns in steady blasts. Fire sirens blew; the town’s fire engines and ambulance drove through Easton tooting their deep-throated horns and clanging their bells. Impromptu bands gathered at corners. Some used lard cans for drums; others joined in playing and singing victory songs. …

“Joy was unconfined,” was the way the Star-Democrat summed it up. … The paper told of one man who stood in the middle of Washington Street, dressed in a top hat and linen duster, directing traffic. Every so often he set fire to a newspaper, dropped it into a bucket at his feet, and gleefully watched it burn. Another man tried to get a woman to waltz with him in the middle of the street, but she refused, saying, “No, thanks. I want to live to see the rest of this happy night.” So, said the paper, he marched off down the street, ringing the doorbell of every house he passed. Still others carried confetti or torn up strips of newspaper, which they showered on bystanders. … 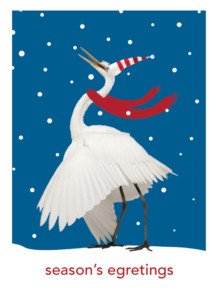 Many persons, especially the wives, sweethearts, and parents of servicemen, headed for church. But the din outside was so great that … normal services were impossible. At Christ Church the Reverend Durrie Hardin didn’t even try. Instead he stood at the door greeting parishioners as they entered, and let them compose their own prayers of thanksgiving. At Trinity Methodist there was singing and responsive reading, but the preacher stopped his sermon in the middle because nobody could hear him.

Next day came orders from Washington to cancel wartime rationing of gasoline and of most canned goods at once. By Thursday, filling station owners in all parts of the county reported constant lines of people driving in with the almost forgotten order: “Fill ‘er up!” Storekeepers immediately started selling all canned goods except milk without ration points; but curiously, there were few buyers. “People around here are funny,” said one merchant. “When they find out they can get things, they don’t want ‘em anymore.”

The photo here by the great Alfred Eisenstaedt was taken in New York City, of course, but Preston makes it sound like the Eastern Shore wasn’t very far behind the Big Apple in the partying department, at least when it came to VJ Day in Easton.