By Secrets of the Eastern ShoreJune 24, 2020No Comments

Home / Way Back Machine / Quote of the Day / QUOTE OF THE DAY: In Colonial Times, You Could Pay Your Tax Bill in Squirrels’ Heads

Taxes come due a little later than usual here in 2020. Because of the big pandemic, the government pushed the deadline back to July 15. My condolences to those of you still wading through paperwork.

If it’s any consolation, taxes were complicated back in colonial times, too–just in a different way, one that might have you donning camo garb and grabbing a gun instead of hunting for receipts in a drawer. That much I learned recently while paging through the History of Cecil County (1881) by George Johnston. At one point, Johnson surveys records of what transpired in courtrooms during the year 1724 and  included these two items:

Benjamin Allen prays the court for an allowance due him for one wolf’s head and thirty-eight squirrels’ heads which had been omitted in the levy that year. That same year Cornelius McCormack prays to be allowed for eighty-six squirrels’ heads and a large number of crows’ heads. 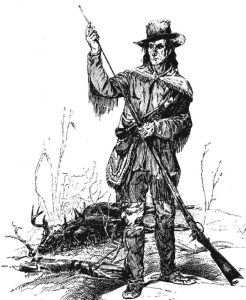 Tobacco was the currency of choice on Delmarva at that time. Tax calculations were simple enough, with residents owing a certain number of pounds of tobacco depending on circumstances and locations. But even then, the government was offering tax breaks to folks who behaved in ways the government wanted them to behave.

Farming was king in the economy back then, but farmers had a lot of enemies, most especially the crows, squirrels, and deer whose ravenous appetites could ruin crops. Predators could cause problems too, so add wolves to the list of creatures whose populations the government wanted under control.

To keep them under control, the powers that be offered taxpayers an option. Instead of paying, say, two pounds of tobacco, they could pay just one pound of tobacco, as long they also proved they’d killed a bunch of the animals responsible for eating crops and killing chickens. That meant bringing lots of dead animal heads into the tax office. Back to the History of Cecil County:

These animals were so numerous and destructive for a long period, that the legislators of the colony set a price upon their heads for the purpose of keeping them in subordination. … taxpayers were allowed to pay their taxes in squirrels and crows’ heads, which was a great advantage to them, as well as to the commonwealth.

Things went even farther along these lines on the Eastern Shore of Virginia. According to the book This Land, This South: An Environmental History, Virginia in 1734 required every “tithable” resident to turn in to the justice of peace three crows’ heads or squirrels’ scalps. “The reward was a tax credit of 21 pounds of tobacco for each head or scalp, and there was a penalty for failure to comply,” reports the author, Albert Cowdrey.