By Secrets of the Eastern ShoreMarch 26, 2021No Comments

Home / Way Back Machine / Quote of the Day / The Best Delmarva Trip You’ll Never Get to Take: Cobb’s Island Hotel in the 1860s

Outdoorsman Alexander Hunter wrote an essay describing his visit to the Cobb Island (Va.) Hotel shortly after it opened on the barrier island of that name off of Virginia’s Eastern Shore. The essay was published in a 1908 book, but the events it recalls go back much further. The hotel first opened in the 1860s.

The Cobbs had no idea how to run a hotel–except that the ways things turned out, that added the charm of an operation that soon became quite famous. When the Cobb Island Hotel was destroyed in an 1896 storm, newspapers all over the country joined in a lament for what was often described as “one of America’s most famous resorts.”

Hunter begins his essay with a smidgeon of background, telling how New Englander Nathan Cobb came to buy the island from a local fisherman and then move his family out there in the 1830s. The Cobbs launched a “wrecking” company in which he and his sons salvaged the cargo aboard shipwrecks in exchange for a percentage of the take. The business went well, which is where I’ll pick up the promised excerpt from that essay by Alexander Hunter:

“[F]ortune smiled upon them. A ship loaded with coffee from Brazil went ashore, and the Cobbs saved the cargo, and received $10,000. Another ship panned out $5,000 for salvage, and their last windfall was a three-masted bark of $4,000. Had old man Cobb and his three stalwart sons been content to remain in their humble sphere, they would have been kings of fishermen, the emperors of sportsmen, and Rothschilds among the toilers of the sea.

“Then the United States Government built a [life-saving] station, and manned it with a picked crew [that handled shipwrecks], and the Cobbs found their salvage fees gone. They had more money than they could spend, but when is man ever content?

“So the Cobbs, who received a steady income [in access fees] from visiting sportsmen, determined to make Cobb’s Island a summer resort. Just here it may be well to say that this place was then by far the finest shooting-grounds on the Atlantic coast for wild fowl and bay-birds. It was not only the feeding-grounds of enormous numbers of brant, geese, and snipe, but, being so far out in the ocean, it attracted, as a resting-place, vast flocks of migrating birds, and it was literally the paradise of sportsmen.

“The Cobb’s erected a long, rambling structure of boards along the line of architecture of the inns of Virginia and North Carolina, which have been built in the same style since the memory of man. Several cottages were also added, and the season opened auspiciously with two hundred guests.

“I happened to be there at the opening, and it made a greater impression upon me than any seaside resort I ever visited. The attempt of three simple-minded, honest fishermen to run a watering-place, without the remotest idea of anything outside of their storm-tossed isle, was certainly unique and rare. 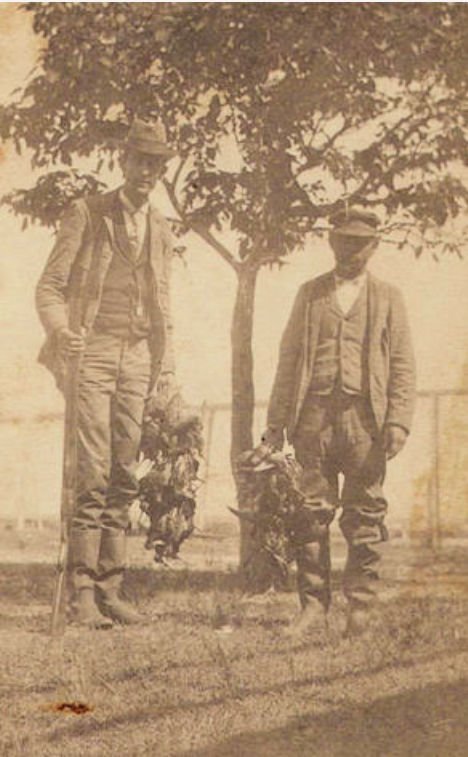 “Warren Cobb, the eldest son, was a rough and ready mariner, with a voice like a fog horn, and an insatiate thirst. He was a typical ruddy-faced, good-natured, weather-beaten, ocean fisherman. He never refused an invitation to ‘splice the main brace,’ and each succeeding drink only made him happier than the one before.

“Nathan, the second son, was a very tall, angular man, of powerful build, and withal as gentle and tender as a child. He was the only sportsman in the family, and was, without exception, the finest shot I ever met. He probably killed more wild fowl for market than any other gunner in America.

“With all his simplicity, he had strong horse sense, and refused to join the hotel syndicate. ‘Here I is, and here I stays,’ was his ultimatum, as he pointed to his neat house and fine garden. So he stuck to his business, and in the course of time he owned nearly the whole island.

“Albert, the youngest, was the bright one of the family; he was a sport, too, but his game was draw-poker.

“Well, the opening was a great success. However, a young, inexperienced fellow from the mainland, a friend of the family, was installed as clerk at the hotel. But he kept no books; he carried the current sheet and ledger in his head, and at the end of the season he ‘skipped,’ and left nothing behind save his conscience, and that was probably of small value.

“It was truly ludicrous, these untutored, unimaginative wreckers catering to the wants of the delicate, refined pleasure-seekers. Well, the balance was about even; these Norsemen did not understand their guests, and the guests certainly did not comprehend their landlords. 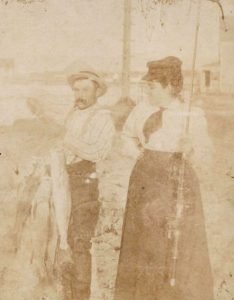 “The guests were, for the most part, fashionable people. When the hotel and cottages were filled at the opening of the season the Cobbs were simply dumbfounded that there were people in the world who could want so much. Livery, telegrams, drainage, laundries, waterpipes were as Sanskrit to these simple-minded men, and they were as much out of place as was Christopher Sly in the lord’s palace.

“The fare was plentiful, most profuse; in fact, it was served in wholesale quantities. For example, a guest would call for fish, and a huge sea trout, some two feet long, enough for a whole family on Good Friday, would be placed on the table. Bread — a corn-pone the size of a Belgian curbstone would be handed up. Beef — and a collop that would satisfy a Pawnee Indian would arrive. Soft crabs — six at a time would be brought.

“Such things as sauces, pickles, condiments, preserves, were unthought of there — simply because they were unheard of. Indeed, the weather-beaten wreckers who had lived, as it were, in a world of their own, must have felt as did our savage Saxon ancestors when the witching dames par de la monde, of the French Court, following in the wake of William of Normandy, appeared before the eyes of the uncultured Britons. 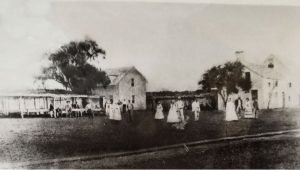 “These wreckers, like the old Norsemen, were children of Nature; they ate when they were hungry, drank when thirsty, rose with the dawn, and retired to their rest at the end of the day. So, the rich and fastidious sportsmen, brought their wives, sisters, cousins, and aunts to the island on a kind of lark — and they had it.

“It must be confessed that some of the sportsmen, for the sake of a practical joke, inveigled their people to Cobb’s, and many of the visitors expected to find on the island a modern hotel with gas and electric lights, splendid band (alas for that one fiddle and harp!), superb bar, wine vaults, tonsorial accommodations, billiard saloon, telegraph facilities, and many other things considered by many the necessaries of life; and when they saw the meager establishment, a few actually returned home, but the majority remained, and many declared it to be the best time of their lives.

“There was no conventionality at Cobb’s, no grades of social position; every one was on an equal footing, and as one of the Cobbs was heard to remark, ‘If they didn’t like it, they could lump it.’

“But it was in the ballroom, where the ‘band’ was waving and weaving a ‘voluptuous well,’ that the proprietors would saunter through the room clad in their usual costumes of an oilcloth hat, Guernsey jacket, canvas breeches, and rubber boots reaching to the hip. But withal, there were no bonifaces in America that were as popular, for the Cobbs were so sincere, so true, so democratic that they treated all alike. Whether you were noble or serf, rich or poor, famous or unknown, it was all the same to them; and when the visitors left the island it was with regret at the parting.

“Old man Cobb took no part in the new deal; none ever saw him at the hotel. He had a fine plot of ground, and a snug, comfortable house, and there he stayed with his tame brants, as isolated as if he were a lone fisherman on a lone isle, as in days of yore.

“For many years Cobb’s Island was the most famous resort in America for the combined attraction of hunting and fishing; and a week’s stay at that place was like taking an ocean trip abroad. It possessed a peculiar fascination for the sportsman, and many of us went to the island year after year.”

–posted by Jim Duffy on March 26, 2021 for Secrets of the Eastern Shore/Whimbrel Creations LLC.

• The book Hunter’s essay appears in is titled The Huntsman in the South Volume 1: Virginia and North Carolina. There is not much information out there about it. Here is a little bit.

• The photos of anglers and hunters here are from “The Countryside Transformed.” The one of the Cobb Island Hotel is in the collection of the Barrier Islands Center in Machipongo, Va.

Last not least: Thank you for spending time on this site and with this story!