By Secrets of the Eastern ShoreSeptember 1, 2020No Comments

I am not sure which individual is responsible for the memory I’m sharing here, as my source material was the work not of a single author, but of a committee of volunteers. Back in 1976, the Choptank Bicentennial Committee put together a little booklet to mark 200 years of American independence by celebrating life in their own little town, which lies on the river of the same name in Caroline County, Md.

Here is one section of what they came up with–memories of growing up in Choptank.  I am guessing that the volunteers on a committee like this were probably in the back half of life, probably well over 50. That would put the scenes below in the early years of the 20th century.

“The first morning sounds would be the creak of wagon wheels rolling by the bedroom window on the hard dirt road and the clop-clop of hooves in the horse channels as farmers carried loads of watermelons to the wharves or tomatoes to one of the canning factories on the waterfront.

“After breakfast the big decision was whether to watch the men unload or creep over the oyster shell road by Wright’s canneries to spy on the Bohemian camp [where immigrant laborers worked]. [There, you would] stare at the women cooking meals over outside fires and listen to the strange foreign language of the summer factory workers from Baltimore and across the sea.

“Maybe you would go down to Walter Wright’s canning house and peel tomatoes in someone’s bucket. If you peeled fast and kept quiet you could hear the adults talk over church business [or] their daily affairs and later join in as the workers sang hymns and old favorites. Maybe when you were nine or ten you could earn your own money by rolling cans or skinning tomatoes.

“By and by the steamboat whistle sounded. Sounds like the Minnie Wheeler a coming. Better go down to see who and what’s aboard this time. The farmers drove their team so far out on the loading dock that it’s a wonder they did not fall overboard. Maybe a watermelon will fall off and some quick boys and girls will get a juicy chunk.

“That’s mother calling, ‘Dinner Time!’ After a stick ‘to the ribs, down-home dinner at noontime, mother mentioned the weeds in the garden. Two baskets packed full of lamb’s quarter and pigweed should satisfy fat old Oscar in his smelly sty beside the back fence. Time to jump in the Choptank and cool off.

“Passed by Rumbold’s livery stable and watched him trim the bay mare’s hoof. The courting buggy went out last night and she came back in bad shape. Sure wish there was a spare penny for some candy from Sam West’s store. Captain Carroll says the fish aren’t biting today. [The old men in the store] jaw about bait for a while and the barefoot child gets bored, wanders away, and jumps in the cool river. 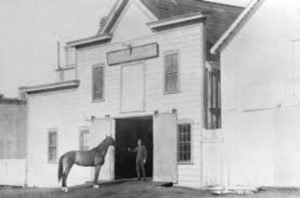 A typical livery stable of the period

“Wagons and carts ride through all day. Mr. Buckley ambles on down to Dillon’s store, talks a while and buys some sewing needles for Miss Charlotte. The single girls at the sewing factory work a 10-hour day and the folks at the cannery work until the tomatoes stop coming. After supper the child may stop by the canneries again, or visit an aunt stuck at her sewing machine, turning out cuffs or collars by the piece for the shirt factory.

“The visitors pitch in and clip threads to help aunt while the adults talk about old times, to retell stories about long-gone forbears and to speculate about newspaper stories or the latest romance brewing in the village.

“Listen, band practice [is getting started] at the School House. One of these days they are going to blow down the front room. Wonder if they will play Estelle Wright’s ‘Choptank’ song?”

Here are the lyrics to that song, “Choptank.” I wonder if anybody in town still knows the music?

One evening ’twas in winter
They went out to serenade
They made such awful noise
That the vampire got a afraid. 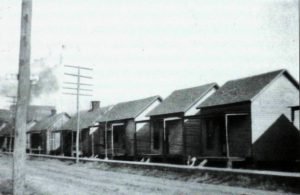 Toot-toot-toot, the coronet played by
Orrie Baker
Rum-rum-rum, the old trombone
Soon knew how to shake ’em
Rat-tat-tat, the clarinet played by Ollie Wright
(Whistling) ….. music on the fife

When that band began to play
All the people marched, marched away
Then you’d hear Squire Blades
Very politely say
Now, you boys, stop that noise
I’ll send you cross the bay.”

–posted by Jim Duffy for Secrets fo the Eastern Shore/Whimbrel Creations on Aug. 31, 2020. All rights reserved.

NOTE: The photo up top here is of present-day Choptank, Md., but the others are presented only as evocative background. Those photos are not from Choptank specifically.