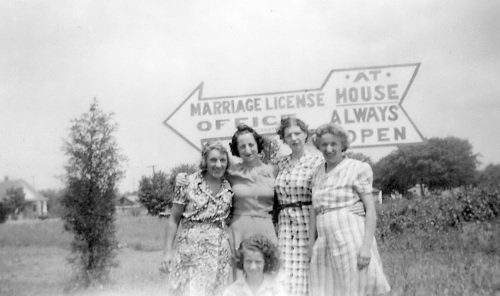 When Elkton Was the Quickie-Wedding Capitol of the Country

By Secrets of the Eastern ShoreJanuary 28, 202213 Comments

This is an excerpt from my book, Eastern Shore Road Trips #2: 26 MORE One-Day Adventures on Delmarva. It’s a fun “Way Back Machine” postscript to a chapter that wanders through Elkton and North East, Md., as well as down to Elk Neck State Park and the Turkey Point Lighthouse. More info on the book here.

In 1913, the state of Delaware adopted a new law requiring that couples planning to get hitched endure a four-day waiting period between getting a license and having a ceremony. By that point, New York and Pennsylvania required waiting periods, too.

What’s a couple in a rush to do when faced with such obstacles? Back then, they found an answer in Elkton, the closest county seat in Maryland to the Delaware border, as well as a super convenient destination by car and train.

There were a couple of colorful idiosyncrasies about this elopement trade. Maryland back then required that weddings involve an official religious ceremony, so couples couldn’t get hitched at the courthouse, which is why more than 20 wedding chapels lined Elkton’s Main Street at the height of the quickie wedding boom.

The state also had a law that prohibited the active “solicitation” of wedding business, so these chapels were not allowed to advertise or otherwise reach out to prospective newlyweds. Elkton’s taxi drivers stepped into that void, many of them cutting under-the-table deals with this or that chapel and then prowling the train station in search of freshly arrived lovebirds. Oral history has it that fistfights broke out with regularity among cabbies arguing over who spotted which pair of lovebirds first.

On the Secrets of the Eastern Shore website, reader Andrea Boulden-Gagliano shared some family memories about this period. Describing her native Elkton as a “sweet Mayberry kind of town,” she went on to describe shenanigans that seem a little un-Mayberryish: 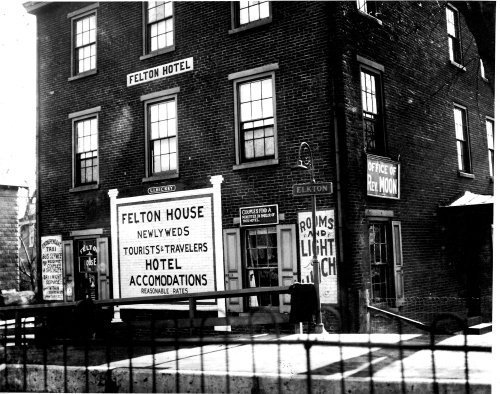 My aunt Pauline Boulden, was married to Harry “Hedgey” Woolman, who would later become a fairly well-known stunt man in Hollywood. During the Elkton chapel heyday, they would ride [on motorcycles in front of] the potential and just-married couples, with my aunt riding on Hedgey’s shoulders and doing all kinds of tricks. She said times were tough and that was a quick way to make a buck.

Hedgey Woolman had a bunch of fun tricks up his sleeve. He was also known to lead couples through the downtown while seated backward on his motorcycle, or while doing a handstand. Lots of famous people got married in Elkton—actors Cornel Wilde, Joan Fontaine, Martha Raye, and Debbie Reynolds among them. One of them turned out to be a big-time promoter who lured Woolman to Hollywood, where he became a well-known stuntman in numerous movies and television shows. If you ever watch the classic “Hunchback of Notre Dame” starring Charles Laughton, that’s not Laughton swinging down on a rope from a bell tower and swooping up a condemned girl from the gallows—that’s Hedgey from Elkton. 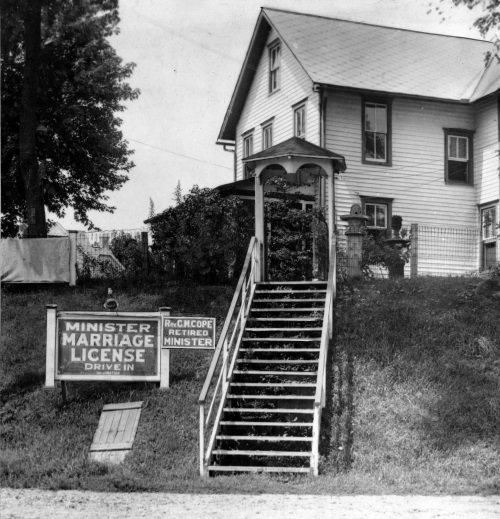 Back in Hedgey’s hometown, Elkton’s 25-year-long reign as the quickie-wedding capital of the region started to come to an end in 1938, when a statewide referendum mandating a 48-hour waiting period passed by a wide margin. (In Cecil County, the vote was overwhelmingly against that measure.)

Many of the chapels on Main Street managed to live off of the town’s wedding-bells reputation for quite some time to come, however. As late as the 1970s Elkton was still marrying 6,000 couples a year. More recently, celebrities who have tied the knot there include Watergate-era Attorney General John Mitchell, basketball star Charles Barkley, and evangelical minister Pat Robertson. Alas, the last wedding chapel in downtown Elkton closed in 2017.