By Secrets of the Eastern ShoreMarch 28, 2020No Comments

On a Sunday afternoon in May 1929, Talbot County (Md.) Sheriff Thomas L. Faulkner and a team of local officers and federal agents sailed from Lowe’s Wharf, just up the mainland from Tilghman Island, heading past storied old Poplar Island and into the open Chesapeake Bay. But then the boat spun around and headed back for the island from the north.

Poplar Island was a shadow of its former self by this point. No one lived out there full time anymore–everyone had moved to the mainland. The forces of erosion had split the island into three separate land masses, one of which was now known as Valliant’s Island. Owned by a hunting club whose members visited the place only during fall duck season, Valliant’s was about as isolated a place during the spring and summer months as there was in the Chesapeake Bay.

I learned what happened the day of Sheriff Faulkner’s raid while paging through Chesapeake Rumrunners of the Roaring Twenties, a book by Eric Mills. The author used to work at both the Chesapeake Bay Maritime Museum and the Talbot County Historical Society—it’s quite a well-done book. All the material below is based on or quoted from Chesapeake Rumrunners, which you can find info about here.

Back to the story:

“The sheriff had been cooking up this expedition for days; the only thing that had delayed their departure was the arrival of the federal men, who hadn’t been told where they were going.”

“[As they approached Valliant’s,] a mean dog barked vicious greetings. The lawmen came on land. The dog’s caterwauling failed to warn the bootleggers. Faulkner’s group arrested four men and discovered the mother lode: a giant 1,000-gallon still, several 500-gallon stills, 121,500 gallons of mash, hundreds of cases of glass jars, heaping stores of sugar and rye flour, 42 vats of mash, a 40-horsepower boiler, and scads of paraphernalia indicating impending growth of the operation.”

“Here, on an isolated little chunk of land in the Chesapeake Bay, somebody had set up a factory town. The sheriff and his men hid their boat in the bushes. They waited. They waited some more. There she was: coming in off the northwest shore, a boat. She docked. The lawmen jumped out, pistols drawn.”

The boat had powerful Palmer engines. From the five crew members they arrested, the lawmen soon confirmed that this was the boat that had delivered 200 gallons of whiskey to Annapolis on Friday night and 300 gallons on Saturday night. The nine total arrestees, who were soon on their way to a jail in Baltimore, had a mix of American and Italian names: Walter Perry, Galliano Armando, Maestri Pasquilla, Julian Coats, Marion Coats, Alfred Dasgeth, Herbert Bowig, Joseph Brown, and Sidridge Joyner. 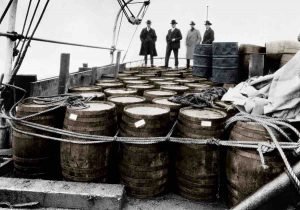 Joyner, who was said to be the boat’s skipper, hailed from Rock Hall. Mills refers to the group as a “rogues’ alliance of Chesapeake watermen and Italian racketeers.”

More from Chesapeake Rumrunners:
“The day after the raid, Sheriff Faulkner and another officer returned to the island. They came in a big scow, a roomy vessel for all the evidence they were going to stockpile. They destroyed the still’s coil and bashed in the boiler. They loaded the scow with all sorts of parts, gadgets, and moonshine ingredients. They unloaded the haul at Lowe’s Wharf and stored it all at the Sherwood Packing Company fish house. One of the prizes they brought off the island was a brand-new rum-running vessel, mightily motored, estimated to be worth about $2,000.”

“It was one of the largest operations of its kind ever found in Maryland. The Poplar Island booze factory was set up to crank out more than fifteen hundred gallons a day.”

A gallon of whiskey went for $3 during Prohibition times. The lawmen estimated that the Poplar Island factory was big enough to crank out booze at a $5,000-a-day pace. The equivalent in modern dollars would $75,000 a day. Spread out over a year of weekdays, it would add up to an annual haul of $20 million in today’s money.

At the time of the arrests, the operation was just getting off the ground. 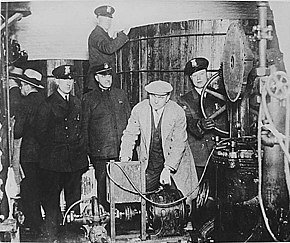 “Left unchecked, it would have grown even larger, fast. One of the men arrested on the island reportedly said that if the sheriff had postponed his raid by even a few more days, the operation would have been significantly larger: 50 employees, some of them making $100 a week.”

“The rumrunners weren’t just hauling loads to Annapolis; after just a few weeks [in] existence, the island factory already was shipping out liquor to all parts of the state.”

Investigators continued to work the case for many months, chasing a money trail that eventually led them to the financiers of the operation. Several of those mob-connected Italian immigrants were later deported.

“It was one of the greatest hauls ever made in this section,” praised a Shore reporter, “and the plans of the sheriff were well laid.”

NOTES
• Once again, you can find information about the book Chesapeake Rumrunners here.
• The photos here are not specific to Talbot County or the Chesapeake Bay. They are simply Prohibition-era images used to illustrate the piece.