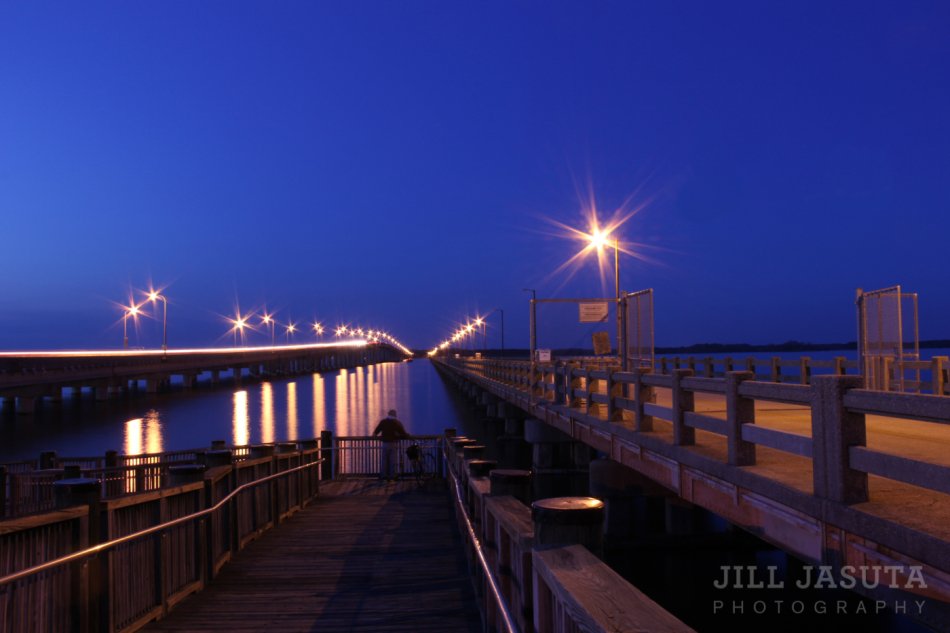 PICTURE THIS: The Story Behind the Twin Bridges of Dorchester County

By Secrets of the Eastern ShoreNovember 9, 2018September 30th, 2020No Comments

Home / Way Back Machine / PICTURE THIS: The Story Behind the Twin Bridges of Dorchester County

You know how the traffic goes on Kent Island come summer weekends? The backups begin many miles before the Chesapeake Bay Bridge. Then a legion of goofballs make it worse by looking for shortcuts when they don’t have a clue where they’re going. The poor local people end up trapped inside their houses, afraid to even run a little errand.

Things used to be like that in Cambridge, Maryland too. The photo up top here, which is by Jill Jasuta Photography, captures the story pretty well. I’ll copy it in here as well.

Start on the right-hand side: Today, that’s a popular fishing pier named after the late, great outdoors writer Bill Burton. Back during the Great Depression, however, the Emerson C. Harrington Bridge ranked a marvel of engineering and technology. No bridge had been ever been built by that point across this two-mile-wide stretch of the Choptank River. When it opened, the Harrington Bridge was the longest bridge in all of Maryland, and it held that title all the way up until the Bay Bridge itself opened in 1952.

President Franklin D. Roosevelt himself was on hand at a 1935 grand opening to celebrate the “splendid” accomplishment of spanning this stretch of the Choptank. His presidential yacht, Sequoia, was the very first vessel to sail through the draw set in the midst of bridge.

The project was one of the Depression-era initiatives Roosevelt pushed through in order to help get people back to work. One of the young men who got a job on that project was a local boy, Frederick C. Malkus. He earned $13 a week–more on him in a minute.

When the Bay Bridge did come along, it helped turn this onetime marvel of modernity into an anachronism. As more and more traffic came from the Western Shore bound for the beach, the two-lane span at Cambridge proved woefully inadequate, especially on summer weekends. Backups often stretched for four miles or more. Boat traffic through the draw made matters worse.

One local business, the Bay Country Shop—which is still open today, amazingly enough—used to send an employee out to sell soda to stopped traffic along the roadway. Then-manager Margaret Tubman said, “They just threw money at him, dollar bills. They didn’t want any change. We made more money selling drinks than we did in the store.”

Much like they do on Kent Island today, locals simply stayed away from Route 50. The businesses on the highway suffered through every backup, with nary a customer in sight. Accidents were commonplace. In 1979, a 27-year-old Cambridge woman lost her life when she stepped from her car during one of those backups and got hit by another vehicle.

That was the last straw for a group of local ministers, who soon set about gathering more than 5,000 signatures asking Gov. Harry Hughes to build a new four-lane bridge. The man who took the lead on that project in Annapolis was that same local boy who had helped to build the bridge, Frederick C. Malkus. A state senator by this point, he was soon telling anyone who would listen that the proposed new bridge was a sure bet to pass through the General Assembly and get approved by the governor.

“This is one we’re gonna win,” Malkus told the Baltimore Sun, “not because they have any great love for us country boys but because the city boys will have a hell of a time getting to Ocean City without it.”

The Frederick C. Malkus Bridge, which is on the left in that photo up top, opened at last in 1987. A four-lane span without a drawbridge, it solved the summertime traffic woes in Cambridge pretty well. Even today, three decades later, the site of a significant backup on summer weekends is a rare one at the Choptank River crossing.

• NOTE #1: In addition to the two fishing-pier remnants of the old Harrington Bridge, there is one other landmark in Cambridge dating to the opening of that bridge in 1935. A faux smokestack from one of Roosevelt’s presidential yachts—the Potomac, not the Sequoia—stands on the waterfront at Long Wharf Park, near the Choptank River Lighthouse. That “smokestack” actually served as an elevator to help the disabled Roosevelt make his way around the yacht in ways that helped to keep his disability a secret from the public.