Peddler’s Run: The Innocent Little Stream with a Deadly Name in Charlestown, Md.

The next time I visit Charlestown, Md., I going to stop and take a picture of Peddler’s Run. I don’t recall paying that little spit of water any mind on my previous visits, but back then I didn’t know the story of how the creek got its name.

There are lots of other things to gawk at in history-laden Charlestown, which is on the Upper Eastern Shore of Maryland in Cecil County. It’s got a gorgeous waterfront on the North East River. It’s got a bevy of interesting colonial-era buildings. It’s had some brushes with greatness–Benjamin Franklin and George Washington spent time here during their travels.

So why pay attention to the itty-bitty stream called Peddler’s Run? The answer to that involves romantic dates, old-time fiddling, drunken benders, an unspeakable crime, and, perhaps, a headless ghost.

A Colonial Fair for the Ages

As historic towns go, Charlestown is like a comet–its time in the limelight was brief but brilliant. The folks who started the town in the 1740s were supremely confident that it would soon surpass Baltimore as the metropolis of the Upper Chesapeake Bay. Things got off to a promising start, actually, and one reason for that was the success of the Charlestown Fair.

First held in May 1744, it was a colonial version of one of our modern downtown block parties, a shut-down-the-streets mix of entertainment and commerce that drew patrons from near and far. The fairs went on for nearly a century, lasting deep into the 1820s. In some years, there were multiple fairs, with April and October events held as well.

Merchants came from Baltimore, Philadelphia, and many other towns, setting up shop on the town square in “rude structures made of bushes” that measured 10 feet by 10 feet. (Interestingly, that’s the same footprint made available to vendors at Delmarva events nowadays.) The rental fee was seven shillings and sixpence.

Folks came from all over, arriving by boat or on horseback or aboard Conestoga wagons. Here is historian George Johnston, writing in 1881:

“[They] came from distant parts of Chester and Lancaster counties [in Pennsylvania] … to see the sights and have a frolic, and sometimes to settle the feuds and quarrels that had existed in the neighborhood where they lived. … [There was] fiddling and dancing, as well as frolicking and fighting.”

The fairs were especially popular with Irish immigrants, Johnston says: 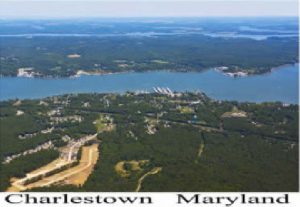 Quite a few of those lasses probably washed their feet in Peddler’s Run.

Fishermen, too, flocked to the fairs, especially the fairs that fell on the calendar at the end of “fishen,” or the close of the fishing season, on the Susquehanna and other nearby rivers. In 1807, to cite just one year in this time frame, 16,000 barrels of shad and herring were cured and packed annually in Cecil County. The Baltimore Sun is talking about those fishermen here in a 1933 article:

Sober as they were at home, the travelers often partook too freely of the flowing bowl–and at the Charlestown Fair, they became riotous. The fair became a menace.

But it was also glorious. Women shopped for items that were otherwise available only in the big city. Those Irish couples danced to that fiddle music. Vendors at this fair introduced the exotic beverages of tea and coffee to locals for the first time, selling packets complete with printed preparation instructions. Coffee was much more popular than tea.

The story of how Peddler’s Run got its name is drenched in blood. I have come across two versions, one by the aforementioned historian George Johnston in his book History of Cecil County, Maryland and one by a correspondent named “Azton” whose account was published by the Cecil Whig newspaper in 1871. 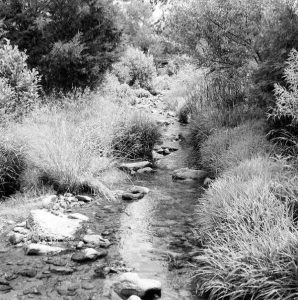 Azton claims to be quoting from a diary-like telling of the incident by another anonymous gentleman who in turn “obtained his information from a reliable source.” That source is described as straight “from the lips of an aged man … who now slumbers in the silent tomb.” Azton’s tale begins with this scene-setter:

“Those who have ever traveled the road from Charlestown to the village of North East must be familiar with a small streamlet that crosses the road about one and a half miles from the former place, and known by the name of Peddler’s Run. This little gurgling stream glides smoothly and silently along in its wandering course, unconscious that its crystal waters had ever been crimsoned by the life-blood of the murdered, and here too the wild bird of the forest pauses in his onward flight, alights to cool his fluttering wing therein, little dreaming of the dark crime that hangs around this spot.”

The victim of the dark crime here was a vendor at the Charlestown Fair, though there is no record of his name. Azton claims that he is buried near the spot where today’s Route 267 (Bladen Street) crosses Peddler’s Run. He says that a “rude” headstone once marked the spot. The crime occurred in or around 1785, while one of the fairs was underway. Here is Azton:

“The black-hearted villain who perpetrated this dark deed of a crime, after having stabbed his victim a number of times, dragged his lifeless body into the bushes nearby, and after having robbed him of his purse, and whatever property of value that might be found upon his person, was about to leave his victim to his fate, when his attention was arrested by the clattering of horses feet.”

The killer panicked. Desperate to stay out of sight, he climbed a nearby tree. The horses pulled up at the stream. The riders led the animals to the shore, wanting them to drink.

“But no sooner had they put their noses to the water than they threw them high in the air and gave each a wild snort, and their riders could not prevail upon them to taste of the water of this troubled stream.”

The riders started nosing around, trying to figure out why their horses were spooked.

“They had proceeded but a few steps when one of them discovered what appeared to be a drop of blood upon a stone.”

There was more blood nearby. Then the body of that peddler turned up. Then they spotted the murderer in the tree. The two riders took the man into custody. He was soon tried, found guilty, and, in Azton’s account, “afterward executed on the spot where the murder was committed.”

The historian Johnston tried to find an official account of the case in the county records, but came up empty. The only legal remnant of the case is this: “The stream is yet known by the name of Peddler’s Run.”

Ghostly Visions in the Night 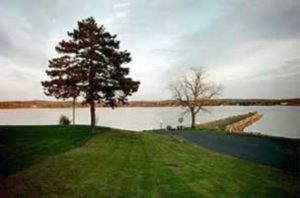 The postscript here is inevitable, and it comes courtesy of Azton:

“Often when a boy, have I listened to the many strange stories told by the superstitious, who have had occasion to pass by this spot after night had set in, of a peddler without head that might often be seen there. Did time permit, I might tell you many strange things concerning this haunted stream, but perhaps I have already occupied too much of your time and will, for the present, close.”

Perhaps then, when next visiting Charlestown, I will make sure to visit Peddler’s Run during daytime hours.

–written and posted on July 19, 2020 by Jim Duffy for Whimbrel Creations/Secrets of the Eastern Shore. All rights reserved.

NOTES
• The photo of the stream here is generic. At this point I do not have a photo of Peddler’s Run specifically. 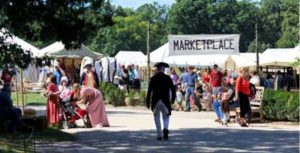 The modern-day colonial fair in Charlestown

• After getting off to that strong start in colonial times, Charlestown fell into a long decline in the years after the Revolutionary War. For various reasons, merchants ended up doing lots more business in both Baltimore and Havre de Grace than Charlestown. To make matters worse, the town’s claim to the seat of Cecil County was awarded instead to Elkton.

• In the past couple of years, Charlestown has hosted a throwback Colonial Fair in the fall months. There is no word as of this writing as to whether the event will be held during the year I’m posting this, 2020. One of the organizations involved is Colonial Charlestown–here is its Facebook page.

• If you are in the area, the town is quite beautiful and full of history beyond the gruesome tale of Peddler’s Run. You will find the link to a walking tour here.

• Word of warning: There is another Peddler’s Run not too far away, on the Susquehanna River in Harford County, Md. Some folks through the years have mistakenly attributed this story to that site–especially the headless ghost part–but Charlestown is the correct location.