10,000 Years and Counting: The Story of the Red Knot and the Horseshoe Crab

Home / Destinations / Natural Wonders / 10,000 Years and Counting: The Story of the Red Knot and the Horseshoe Crab

How much do you weigh?

OK, now imagine the sort of marathon physical ordeal you’d have to put yourself through in order to lose half of your body weight.

OK, now imagine that you’ve been through that ordeal, and now you face a deadline—in just two weeks, you have to eat enough food to get back up to your normal weight. If you fail, chances are pretty good you’re going to die.

Meet the red knot, an amazing salmon-colored shorebird that may well have the longest migration trip of any bird in the world. Red knots spend their summers about as far north as you can get, high up in the Arctic, and they spend their winters about as far south as you can get, down at the lower tip of South America or Australia. Their journey is nearly 10,000 miles long.

What does all this have to do with the Eastern Shore and Southern Delaware? Well, the red knots pass our way at a particularly critical time in their journey. They have been through that physical ordeal, and they have lost half of their body weight. They are desperate to eat, and to rest. And that’s why they have evolved to arrive here just when many thousands of horseshoe crabs are clambering up onto the beaches of Delaware Bay to lay eggs.

Oh man, can horseshoe crabs ever lay eggs! Females dig holes in the sand and then lay a few thousand eggs at a time. Then they do it again and again—one horseshoe crab can lay up to 120,000 eggs between the start of mating season and the end.

In one article I read, a scientist compared horseshoe crab eggs to peanuts—they’re basically small gobs of fat that are really easy to swallow. That is precisely what the red knots need on this stopover. The birds stay in our area for about two weeks, during which time their job is to basically to do nothing but eat, 24/7. 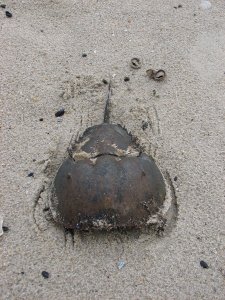 Just thinking about the way these shorebirds found their way to these feasting grounds over time tends to boggle the mind a little. Scientists say the birds have been making this stop for something like 10,000 years now, since back when woolly rhinoceroses and saber-toothed cats still roamed the earth and our ancestors were just starting to figure out this newfangled thing called farming.

As with most any good story, there are complications to report here. About 100 years ago, we humans began to harvest horseshoe crabs in bigger number than ever before. At first, the crabs were used in fertilizer and animal feed. Nowadays, it’s more as bait for conch and eel pots.

There is the scientific angle here as well. The blood of horseshoe crabs contains a chemical critical to the process of testing medicines for purity. As a result, many thousands of horseshoe crabs every year are caught so that they can give some blood and then get returned to the wild. Estimates of how many crabs die during this process range from 5 to 30 percent. 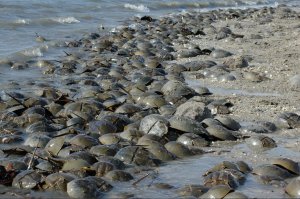 Bottom line: There are a lot fewer horseshoe crabs than there used to be. And that development puts the red knots at risk as well. More than 100,000 red knots used to stop at Delaware Bay every year. As of 2012, that number was down to a little more than 13,000. Both Delaware and New Jersey now have stricter regulations about harvesting horseshoe crabs, so hopefully that will help.

By the way, this natural wonder is something you can and should go see for yourself. The best time to go is May and early June—in the evening, at high tide, and near as you can get to new and full moons. That’s when the beaches will be crawling with horseshoe crabs, and the red knots (and other shorebirds) should be out in force.

One good spot to go is the DuPont Nature Center at Mispillion Harbor. They have a nice observation deck that looks over a beach that the Delaware Audubon Society says usually draws the highest concentrations of red knots. They also have an annual Peace, Love & Horseshoe Crab Festival in mid-May. More toward the end of the month, the town of Milton teams up with Prime Hook National Wildlife Refuge on a daylong Horseshoe Crab & Shorebird Festival.

Other possibilities cited by the Society as places you might explore on your own are Slaughter Beach, Bowers Beach, the Ted Harvey Wildlife Area, Port Mahon Road, and Fowler Beach.

NOTES: The photo of the lone horseshoe crab was posted to Wikimedia Commons by a user named DanCentury. The other photos are all from the U.S. Geological Service. 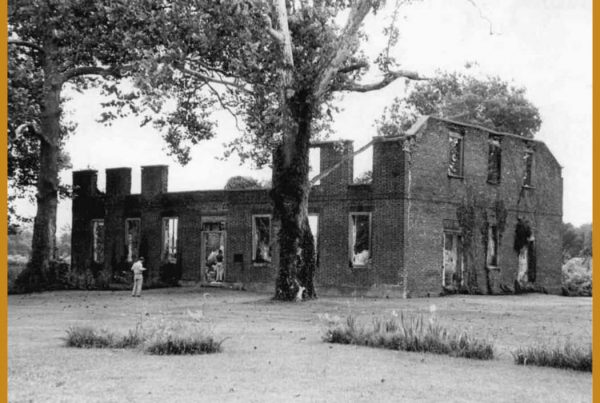