The True Tale of Misty, Stormy, and maybe the worst nor’easter of them all

Home / Way Back Machine / The True Tale of Misty, Stormy, and maybe the worst nor’easter of them all

A version of this story appears in my book Eastern Shore Road Trips #1: 27 One-Day Adventures on Delmarva. Info about the book is here.

The deluge lasted three long days and stretched across five high tides right at the time of the full moon. More than 90 percent of Chincoteague Island flooded. The water ran six feet deep at times on Main Street in downtown Chincoteague. The island’s chicken industry was destroyed–an estimated 350,000 birds died in the storm. Chincoteague’s famous ponies suffered horribly as well. By the time the rain stopped, more than 100 of them had died.

The most famous of those ponies, Misty of Chincoteague, managed to survive the storm. She was pregnant at the time, and living on the Beebe Farm in Chincoteague. Floodwaters did, in fact, reach her barn, but before that happened Ralph and Jeannette Beebe moved Misty into the kitchen of their home. She stayed there for three days. The aerial photo here shows how things looked at the Beebe Farm during the flooding.

Weather experts rank the Ash Wednesday storm among the Top 10 of the 20th century. Forty people died along the coast between North Carolina and New York. Another 1,000 were injured. The NASA facility on Wallop’s Island in Virginia suffered more than $1 million in damage. Here is the Wikipedia page on the storm.

Ocean City was hit hard, too. Waves rising to 25 feet ripped buildings right off the ground and into the sea. Some 350 properties were damaged, and 50 of those were completely leveled.

“This is the worst disaster in the history of Maryland in my time,” said Governor Millard Tawes. Here is a story and photo essay from the Maryland Historical Society about the damage in Ocean City.

Delaware, too, was devastated. Seven people lost their lives. Floodwaters reached inland to Milton and Milford at levels no living person had seen before. Some 2,000 homes were destroyed, including an astonishing 28 out of the 29 oceanfront homes in Bethany Beach. In an effort to discourage looting, the National Guard required official passes from everyone on the coast between Fenwick Island and Slaughter Beach. Here are some photos from the Delaware State Archives of damage in that state. The damage in that state has been estimated at more than half a billion dollars in today’s money. 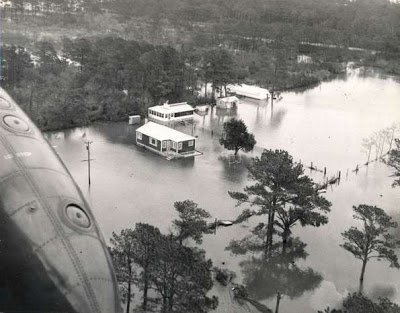 Back in Chincoteague when the stormwaters finally subsided, Misty was transported up to a veterinary clinic in Pocomoke City where she gave birth to a foal. The Beebes naturally decided to christen that pony “Stormy.”

In the months after the storm, the Chincoteague Fire Company needed help in rebuilding its pony herd. Misty and Stormy pitched in–the Beebes took mother and daughter out on a fundraising tour to various schools and civic groups.

Misty’s adventures in the Ash Wednesday storm eventually became the subject of “Stormy, Misty’s Foal,” the fourth book in the Misty series by author Marguerite Henry.

Misty lived another 10 years, until 1972. Stormy died in 1993. Both mother and daughter were sent to a taxidermist after their deaths. They are on display side by side right inside the front door of the Museum of Chincoteague Island.

–Written by Jim Duffy for Whimbrel Creations LLC and Secrets of the Eastern Shore in 2015. Last updated on March 3, 2022.

NOTES: The historical photos here are on display at the Museum of Chincoteague. 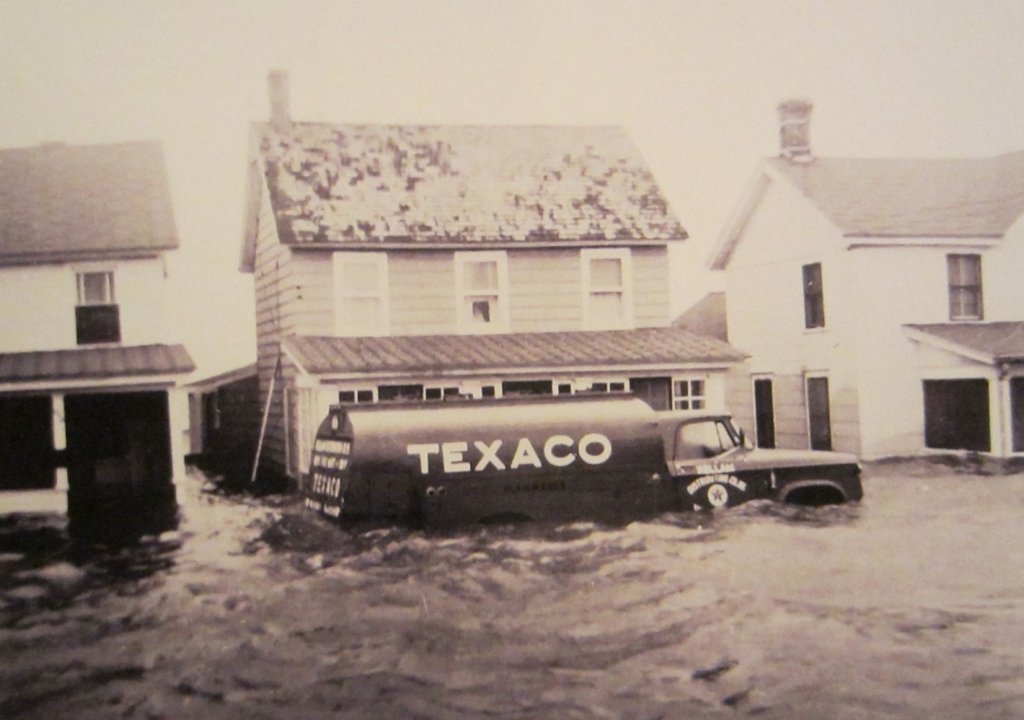 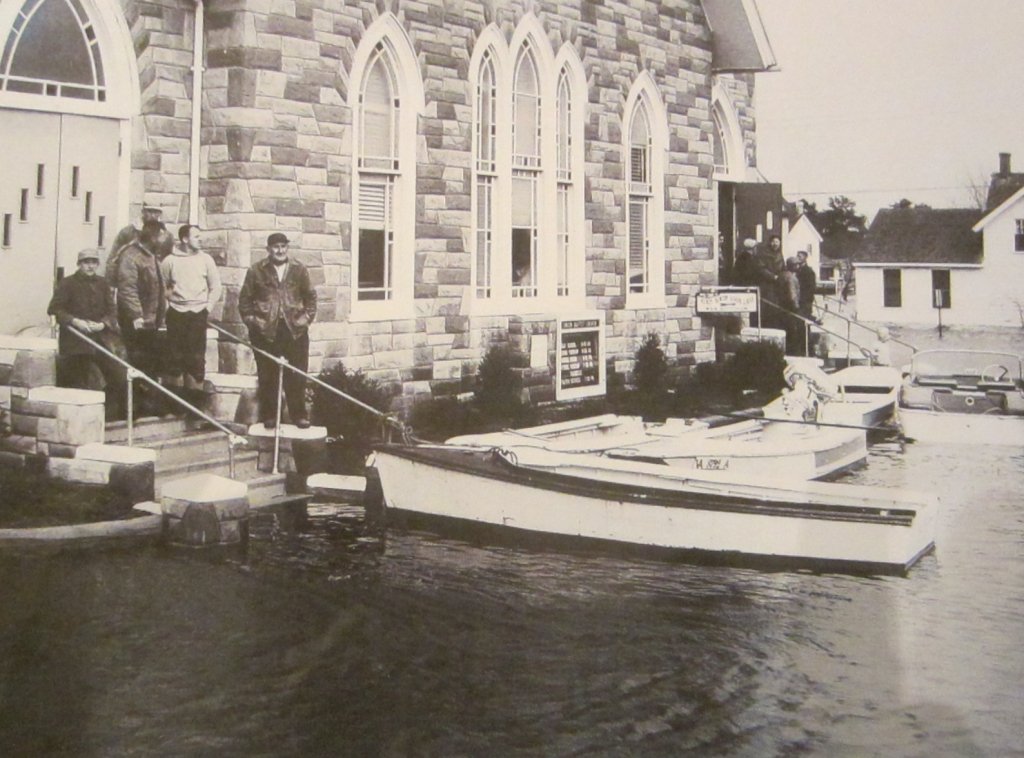 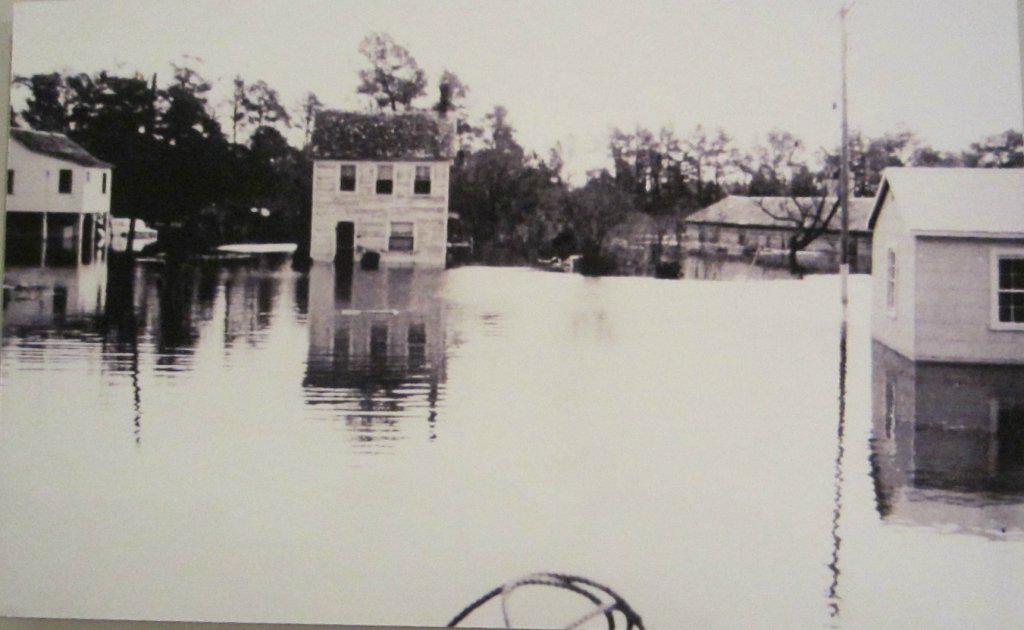 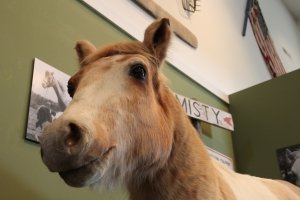 Misty at the Chincoteague Museum 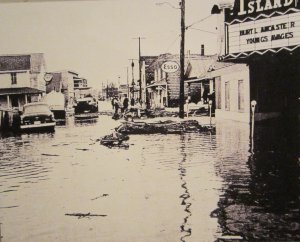