By Secrets of the Eastern ShoreSeptember 30, 2020No Comments

This is an excerpt from Eastern Shore Road Trips #2: 26 MORE One-Day Adventures on Delmarva. Each chapter in the book includes not just modern-day travel destinations, but historical snippets that give a sense for the history and culture of the place at hand.

The peach boom that had lifted the fortunes of so many Delaware farmers and businesses for so long came to a slow, painful end in the early decades of the 1900s, as a deadly disease called “the yellows” moved slowly but surely through Delmarva’s orchards. The Depression fell soon thereafter, leaving towns like Seaford trapped in a downward spiral.

Then came Oct. 19, 1938, the day the humongous DuPont Corporation announced that it had selected a site west of town on the Nanticoke River for a factory dedicated to producing a newfangled synthetic material, nylon. Local newspaper accounts describe the town as “almost hysterical with joy” over the news.

An impromptu parade broke out that night, with fire trucks from Seaford and nearby towns rolling through the downtown, sirens blaring. High school marching bands scrambled together and joined in the parade as well.

“The whole town was a riot of color, noise, laughter, and happy smiling faces.” 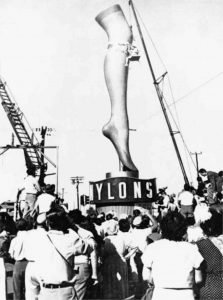 The joy was well founded. The Seaford plant produced 4 million pounds of nylon in its first year of operation. That number soon grew to an astounding 270 million pounds annually as demand skyrocketed for stockings and other nylon products. At its peak in the 1970s, the nylon plant employed more than 4,500 people, a number nearly equal to the town’s population at that time.

Seaford adopted a new slogan: “The Nylon Capital of the World.”

Those glory days are distant memories now, as you’ll see when you find your way down Nylon Boulevard to check out the old plant. You’ll pass a lush golf course that dates to the nylon boom times, but the boulevard ends in a different sort of scene, with overgrown shrubs obscuring your view of the decaying hulk of a factory as it rises up behind a fence topped with rusting barbed wire. Operating as Invista, the plant was still open and producing nylon as of this writing—but barely, with a workforce of less than 100.

The photo here shows one of the many over-the-top marketing ploys related to the early day of nylons–this is when they first went on sale in the city of Los Angeles.