By Helen HutchinsonAugust 28, 2022No Comments

Home / Way Back Machine / Jake the Alligator: Berlin Gets a Toothy, Six-Foot-Four Mascot, circa 1900

This is a free excerpt from my book, You Wouldn’t Believe! 44 Strange and Wondrous Delmarva Tales. More info about that and my other books exploring the history, travel, and culture on the Eastern Shore and in Delaware here.

Paging through a book of photos from times gone by in Worcester County, Md., I came across a crazy postcard. The legend sketched out in a brief caption piles one ridiculous notion atop another. Wait, a man put an infant alligator in the mail? The alligator survived its postal journey? And ended up as a sort of civic mascot, shown off daily in a downtown Berlin storefront to the delight of shoppers?

Yup, it’s all true, right around the turn of the 20th century.

After some hunting around, I managed to find a couple of old newspaper stories that confirm this story in sketchy fashion. In 1872, Mr. Henry Godfrey of New York dropped an itty bitty baby alligator—seven adorable inches long—into a cigar box and mailed him to a friend in Berlin, which is a few miles inland from Ocean City.

The box involved might have been a shoebox, not a cigar box. There are conflicting reports on this detail. Dr. Henry C. Hudson immediately set about raising the critter. He christened his new pet “Jake.” When Jake got big enough, Hudson put him on display in the shop window of his downtown drug store. When Hudson sold that drugstore to Dr. Thomas Y. Franklin, Jake was part of the deal. He stayed right there in the window.

In 2000, an enterprising reporter for the Salisbury Daily Times found a then-95-year-old woman named Doris Taylor who had fond memories of gawking at Jake through that storefront window:

He was the talk of the town. People came here [from other towns] just to see “that alligator.”

Eventually, Jake outgrew the window. By 1906, he measured six feet, four inches long and weighed 125 pounds. He was moved into Dr. Franklin’s backyard, which is where he must have been relaxing while modeling for that strange old picture postcard, considering the chicken wire and wagon wheels visible in the background.

A Farewell to Jake 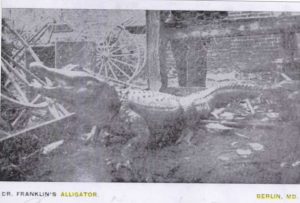 Jake died in 1909. But before we get to his obituary, here are a few extraneous facts I picked up from those old newspaper articles:

• An unnerving quote from one article: Jake “has escaped several times, but has been re-captured without much difficulty.”
• Jake ate raw meat, any kind of raw meat. He wasn’t picky. He could down five pounds on a ravenous summer day.
• During colder months, Jake ate nothing. From October into June, he would lie in a “comatose” state, waking only once he was 100 percent sure that the weather was more to his liking. I have a few winter-dreading acquaintances who are going to be jealous of Jake when they read this.
• Parents in Berlin used to invoke Jake’s name when angry with unruly children. As in, “If you don’t stop misbehaving this instant, I will feed you to Jake!”
• In the summer of 1905, Jake was packed up into some sort of vehicle and transported to Ocean City, where he went on display in carnival sideshow fashion.

Jake didn’t get the full obituary treatment. Instead, the Democratic Messenger newspaper of nearby Snow Hill reported his passing in a column devoted to society happenings. Word of Jake’s demise is sandwiched in between a report about a Women’s Auxiliary meeting at St. Paul’s Episcopal and a guest Sunday school speaker at Buckingham Presbyterian.

Here is the memorial paragraph:

Jake Alligator, for 35 years a resident of Berlin, died last week, was skinned, and will reappear in his old place, Dr. Franklin’s drug store, in the near future [after a taxidermist completes his work]. [Jake] has been an object of interest in the town through the years.

Postscript: Mystery of the Afterlife 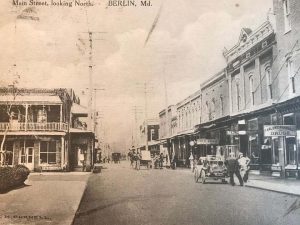 Downtown Berlin in the early 1900s

Sometime in the years that followed, Jake went missing. No one seems to know what happened to his taxidermied body. Could Jake still be out there, hibernating and forgotten up in an attic or out in a barn or garage?

Speaking as an author, it would be great if this book sold a gazillion copies. But it might be even greater if this story found its way to Jake’s current owner and inspired him or her that it’s high time Jake made a triumphant return. That dead alligator belongs on a pedestal somewhere in downtown Berlin, don’t you think?

Excerpt from You Wouldn’t Believe! 44 Strange and Wondrous Delmarva Tales posted by Claudia Colaprete on August 28, 2022 for Whimbrel Creations LLC/Secrets of the Eastern Shore. All rights reserved. Thank you so much for spending a little time with this story and on this site!