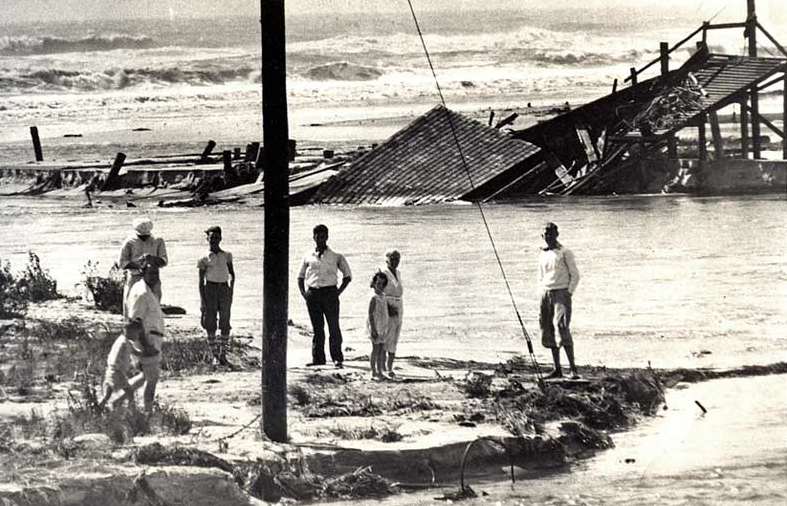 This excerpt from Eastern Shore Road Trips #1: 27 One-Day Adventures on Delmarva is from a chapter spent wandering the boardwalk in Ocean City, Md.

Ocean City dates its history back to 1875, but the resort town we know today really didn’t take shape until Aug. 22, 1933. That’s when a hellacious storm tore a hole through town and altered the course of its future forever. Nobody gave names to storms back then, so this one is generally known only as “The Hurricane of 1933.” It arrived in the midst of one of the wickedest hurricane seasons ever–20 big storms formed in the North Atlantic that year.

The storm made landfall on Tuesday, Aug. 22. But before that, Ocean City had endured four long days of torrential rain. It’s hard to believe one of the newspaper accounts I reviewed, which says that 10 inches of rain fell on Ocean City on each and every one of those four days.

That was just the warm-up act for the Hurricane of 1933, of course. The hurricane itself lasted two days. At the end here, I will provide links to some video shot while it was raging. Winds 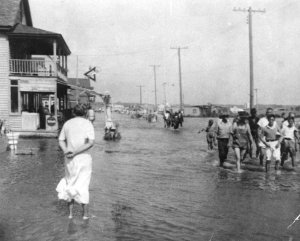 and flooding tore up the boardwalk. Streets filled with floodwaters, sweeping cars and trucks up and away with the current. A good number of homes and businesses were washed into the ocean. (Amazingly, I have not seen any reports of fatalities specific to Ocean City, only ones that refer to seven deaths statewide.)

Even with all that damage, however, something bigger was brewing. The normally serene coastal bays behind Ocean City were so swamped with rainwater and storm surge that they started to resemble a water balloon that was overfilled and bulging to the point of bursting.

Today, Ocean City ends at South 2nd Street. Back in 1933, however, the town kept going. There were at least three more blocks of homes and businesses below 2nd. There was no inlet at that time.

But once that bulging water balloon in the back bays finally burst, well … now there was an inlet. 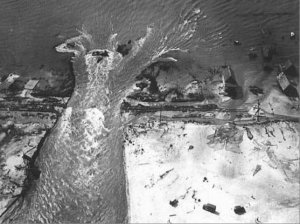 The ironic thing is that for decades before 1933 Ocean City had been pleading with state and federal politicians to build an inlet for them. I will link at the end of the story to some great video footage that shows what an ordeal it was to go fishing in Ocean City before 1933. Every launch involved crews of eight or 10 men, dragging boats down the beach and out into the surf. Every landing involved those same human crews, plus teams of horses or mules for pulling vessels back up for overnight parking on the beach.

In earlier times there had been a couple of short respites from this ordeal. A storm back in the 1800s cut an inlet where 110th Street is today. Another, later storm cut a channel five miles south of town. Fishermen had jumped on both those inlets, but they only got to use them for a few years before Mother Nature and her drifting sands closed the openings up. 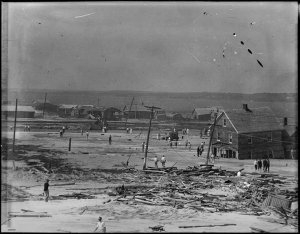 After the Hurricane of 1933, the business community sought government help in keeping this new inlet open for the long haul, and that help soon arrived in the form a big dredging operation and two long stone jetties. Once access to the bays was secured, commercial fishing operations thrived like never before, and recreational anglers up and down the East Coast soon got wind of the fact that this little resort town was fast becoming the White Marlin Capital of the World.

The 1933 storm had other benefits as well. Parts of the new jetties built to protect the inlet after the storm redirected Mother Nature’s shifting sands away from points farther south and toward the lower part of Ocean City, where the beaches soon grew much wider and more tourist-friendly.

The storm also expanded Ocean City’s capacity to grow. Before 1933, the city’s wastewater was directed into the coastal bays and then, well, all that waste pretty much just sat there. After 1933, ocean tides riding in and out of the inlet acted like a flushing system to keep the bays relatively clean even as Ocean City grew by leaps and bounds. Those same tides also turned the water in the bays a shade saltier, and that made for better-tasting oysters that were soon being shipped off en masse to markets and restaurants in the big cities that hadn’t wanted Ocean City-area oysters in the pre-inlet years.

Finally, the storm washed away the old railroad bridge that had long served as the main way tourists got into town. That bridge never got rebuilt—instead, the state erected a bridge over Isle of Wight Bay for vehicles on Route 50, and Ocean City at long last became a convenient destination for automobile traffic. 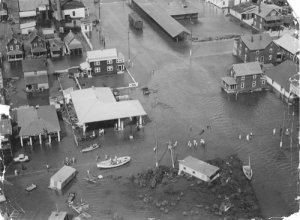 Put all those things together and this is the conclusion of local historian Bunk Mann: “In my opinion, the creation of the inlet was the most important event in the history of Ocean City.”

The news wasn’t quite so good for nearby Assateague. Long a peninsula connected by land to Ocean City, it was now an island. Ever since 1933, it has been adrift, slowly but surely moving toward the mainland by about two-thirds of a mile over those decades. It has also been shrinking ever since 1933, because the jetties up in Ocean City are blocking the way of sands that would otherwise replenish the dunes of Assateague.

I will wrap this up now with a fun postscript. While it is easy for us to see in hindsight that the inlet created back in 1933 was going to last, that wasn’t so obvious to those on the scene back in the day. Consider the case of Clifford P. Cropper, who served a term as Ocean City mayor. Before the storm, he had owned a commercial fishing business on South 5th Street, one of the three old thoroughfares buried under the inlet. His daughter, Violet “Pete” Steger, told a reporter many years later:

Daddy paid taxes on his lots, underwater, for the rest of his life. He died in 1957. He thought if they ever closed the inlet back up, he’d have his land back.

—Written by Jim Duffy. Adapted from the Ocean City chapter in the book, “Eastern Shore Road Trips #1: 27 One-Day Adventures on Delmarva.” All rights reserved. There is more info about that book and where to buy it here.

• Here is one link to old video footage of the 1933 storm, and here is another one.

• Here is the link I mentioned to a video of fishing crews launching and landing their boats in the era before the inlet.

• I got a lot of information for this piece from this article in the Maryland Coast Dispatch, this one in the Baltimore Sun, and this one in USA Today.