When 19-year-old Vernon Cooper landed at the mouth of the Wicomico River, the Wisconsin native didn’t catch on immediately that he’d found his forever home. He didn’t have a crystal ball. He couldn’t see the Dames Quarter gal in his future.

The U.S. Coast Guard stationed Vernon at Great Shoals Light in 1951. That screwpile affair had been guiding vessels on their way to and from Salisbury, Md. since the oyster gold rush days of the 1880s. The beacon stood out in the water at the upper end of Tangier Sound, two miles by boat from the nearest post office—yup, that was in the town of Dames Quarter.

Vernon shared tight quarters in that cottage-style beacon with two other staffers. Their drinking water was collected in barrels set under the roofline of the cottage to collect rainwater. Later, Vernon would recall how grossed out he was at the sight of gulls and other birds doing their business on that roof. There was another reason he wasn’t thrilled over his new assignment:

I was lonely and very, very bored. People would come by [in boats], wave, holler to us. That was about it. No visitors.

Each lighthouse staffer was responsible for his own meals. Vernon didn’t know how to cook. He soon landed in a doctor’s office on the mainland, complaining of persistent stomach pains. The doctor asked, “What are you eating?” Vernon’s answer involved hot dogs, hamburgers, and, well, that’s it.

The days all ran together. Polishing, scrubbing, painting, log-book writing, refilling the lamp with fuel. No shower, no bathtub. There wasn’t even hot water, unless he warmed some up on a ramshackle stove. Doing laundry involved an old-school washboard.

Vernon served shifts that ran 21 straight days. Then he got a week off. Presumably, it was during one of those off-duty stretches that he met 21-year-old Juanita Bozman, though it’s also possible that he first laid eyes on her while during one of his on-duty boat trips that involved stops at the post office or supply runs to a store in Dames Quarter that was run by Delmas and Eva Shores. 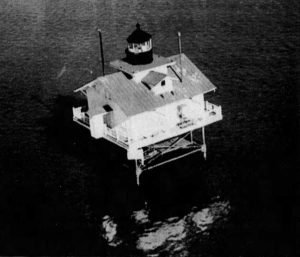 However the meeting happened, it must have been love at first sight, or very close to it. Vernon and Juanita were married within six short months.

That’s where this story takes a fun turn. Lighthouse staffers have a reputation as sticklers for rules and regulations. Surprise visits by supervisors happened now and again—those staffers had to have the beacon ready at all times to pass a rigorous “white-glove” inspection.

But a romantic notion grabbed hold of Vernon’s heart and wouldn’t let go. Somehow, he convinced his Great Shoals compadres to go along with his scheme. The two other men left the lighthouse so that Vernon and Juanita could have a weeklong honeymoon alone on Great Shoals Light. No one sent official dispatches to higher-ups requesting time off. The other guys simply went AWOL.

The honeymoon suite on Great Shoals was a cramped affair involving twin bunk beds. The powder room was a rickety outdoor privy hanging out over the water. The Salisbury Daily Times did two stories over the decades about this 1951 interlude. Both were written by first-rate chroniclers of Delmarva history and culture—the first, in 1972, by Orlando Wootten, and the second in 2002, by Brice Stump. 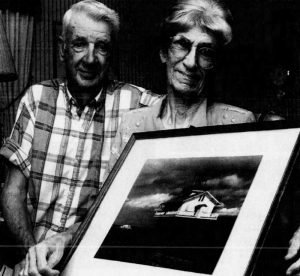 Juanita was 72 years old when she was interviewed for that latter story. She had suffered two strokes by this time and was fighting cancer as well. But her description in that interview of those honeymoon days hints at the vibrant personality that flipped Vernon head over heels:

We fished, we swam, listened to the radio and danced–and had sex, lots of sex.

In between romantic interludes, Juanita went to work. She took over the cooking duties. She helped Vernon refill that lamp. Perhaps it came naturally to her because her grandfather, Calvin Bozman, had been a keeper at the not-so-far-way Hooper Strait Lighthouse. (Alas, that assignment ended in tragedy. In September 1918, a passing ship reported that the lighthouse was dark. An oyster boat soon came upon Bozman’s body, drifting in the strait. An investigation concluded that he had fallen from a storage platform while sawing wood.)

For Vernon, that honeymoon transformed the loneliness of life on a lighthouse into something approaching heaven on earth. In Juanita’s memories, everything about that week in the summer of 1951 was perfect. Here is what she told Orlando Wootten:

There never was more perfect weather. The sun shone all day, and the moon at night. We had the whole place to ourselves with not a neighbor for miles, except for passing boats.

The cottage-style beacon at Great Shoals continued to light the way into the Wicomico River well into the 1960s. But then its light was automated, and the Coopers’ honeymoon cottage was torn down. Its metal foundation remains in place today, supporting a light that shines from a pole. Lots of older locals still miss the romance of that old-school cottage.

Juanita and Vernon never got a chance to go back and pay a visit. Juanita was sad to hear that their honeymoon cottage had disappeared from the Wicomico. 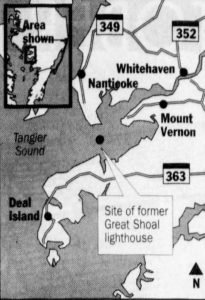 I really loved that old lighthouse, and just hated to see it torn down. We spent a wonderful week there, and no one ever found out.

During his 20 years with the Coast Guard, Vernon was stationed on the other side of the Chesapeake Bay at Solomons Island for a while. He also did time in the Aleutian Islands of Alaska and in Chicago. Juanita followed him on those travels, of course. When their wandering years came to an end, the couple returned to Somerset County.

Vernon owned the Anderson Marine hardware store on Deal Island. He also held several posts over the years with the state of Maryland. He hung onto one thread of his Wisconsin roots, becoming well known as the biggest Green Bay Packers fan in Somerset County. He hung out with the straight-shooting gang at the Manokin Gun Club as well.

Juanita spent most of her married years in the roles of housewife and mother. She was very active in the American Legion Ladies Auxiliary. In their later years, the couple lived in the town of Princess Anne.

Juanita died in 2004 at the age of 76. Vernon joined her on the other side in 2011 at age 81. The couple had five children. At the time of Vernon’s death, they had eight grandchildren and five great-grandchildren. Here’s hoping the two of them are enjoying an everlasting second honeymoon on a heavenly beacon.

–written and posted by Jim Duffy on Jan. 28, 2022 for Secrets of the Eastern Shore/Whimbrel Creations LLC. It’s an excerpt from the book, You Wouldn’t Believe! 44 Strange and Wondrous Delmarva Tales.

• The photo of Great Shoals Light here is in the collection of the U.S. Coast Guard. The photo of Vernon and Juanita in their 70s accompanied the 2002 article in the Salisbury Daily Times that I mentioned. It was taken by Brice Stump.
• I did a post on the Secrets of the Eastern Shore Facebook page that has some more background on the Great Shoals light. See that post here.
• The map here also appeared in the Salisbury Daily Times. It was created by Erick Sahler before he became famous as the resident artistic genius at the Delmarva-themed Erick Sahler Serigraphs. If you are unfamiliar with his work, you should check it out.