Born in Chesterville: The First Black Minister to Address the U.S. Congress

Heading west out of Millington, Maryland on Route 291 you will soon come to a sign announcing that the road is dedicated to the memory of Henry Highland Garnet, whose life story has as many interesting twists and turns as any African American man in the 19th century. The fact that the first black minister to ever address the U.S. Congress is not as well known today as many other abolitionists can probably be chalked up to the fact that Garnet landed on what might be dubbed the “wrong” side of history when it came to a couple of key controversial issues facing that movement to bring an end to slavery.

Make no mistake, though: Garnet was on the “right” side of the most important issue of them all, serving for many decades as a prominent and passionate advocate for the abolition of slavery.

Somewhere around 1815, Garnet was born a slave on a farm along this road, near the town that was then called New Market but is called Chesterville today. You might miss it if you blink.

In childhood, Garnet was owned by a farmer named William Spencer, a veteran of the War of 1812 whose father, in his turn, had been a veteran of the Revolutionary War. Shortly after Spencer died in 1822, Garnet’s parents managed an escape after receiving permission to travel away from the farm to attend a funeral.

The family eventually landed in New York, and Garnet attended several different schools on his way to becoming a Presbyterian minister. As a teen, he also sailed aboard merchant ships. In his 20s, he lost one leg in the aftermath of an injury suffered in a sporting event. I came across one report in my research that said a sister of Garnet’s was captured by a gang of New York City slave hunters. Apparently, Garnet armed himself with a knife and went out looking for that gang. Eventually, some friends managed to convince him to give up that search and go into hiding to protect his own freedom.

Garnet Issues a ‘Call to Rebellion’

By the 1840s, Henry Highland Garnet had developed quite a name for himself in abolitionist circles. Invited to address the Negro National Convention that year, he gave a fiery address titled “Call to Rebellion,” in which he urged both slaves and their abolitionist friends to embrace the concept of armed, violent revolt against the powers that be. This opinion did not go over very well with many in the abolitionist establishment. Those leaders preferred a more nonviolent approach rooted in political activism and civil disobedience. 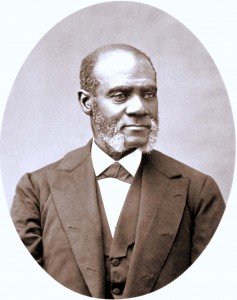 Also around this time, Garnet became a strong advocate of the “colonization” movement, which in theory called for the voluntary relocation of blacks from the United States to countries in Africa and elsewhere where they would be in charge of their own destinies. This proposal, too, went against the grain of much of the abolitionist establishment. Harriet Tubman, for instance, famously had this to say on the topic: “We’re rooted here, and they can’t pull us up.” Presumably, it was policy differences like these that explain the mentions I’ve seen about how Garnet and Frederick Douglass were not on speaking terms for a period of years.

Garnet’s biggest claim to fame in today’s history books came near the end of the Civil War, a period that found him pastoring a church in Washington, DC and recruiting blacks to join the Union Army. On February 12, 1865, he became the first black minister to preach before the U.S. Congress. His speech was titled, “Let the Monster Perish.”

The first sight that met my eyes [in life] was a Christian mother enslaved by professed Christians, but, thank God, now a saint in heaven. The first sounds that startled my ear and sent a shudder through my soul were the cracking of the whip and the clanking of chains. These sad memories mar the beauties of my native shores and darken all the slaveland, which, but for the reign of despotism, had been a paradise.

The previous year, slavery had come to an end in Maryland.

But those shores are fairer now. The mists have left my native valleys, and the clouds have rolled away from the hills, and Maryland, the unhonored grave of my fathers, is now the free home of their liberated and happier children.

But there was still much work to be done, of course, and Garnet urged his audience of “favored men, and honored of God as his instruments” to “speedily finish the work which he has given you to do.”

Emancipate, enfranchise, educate, and give the blessings of the gospel to every American citizen.

You can read the whole speech here.

Garnet Travels ‘Back’ to Africa

After the Civil War, Henry Highland Garnet continued to stress that call for full citizenship of blacks, going on record early and often as a critic of many of the government’s Reconstruction policies that, in his view, didn’t go far enough along the road to genuine equality. He moved a couple of times in these decades, first to Pittsburgh to become the president of Avery College and then to Harlem where he got back to pastoring.

There is touch of irony about his death, as it came right alongside the realization of a dream for this longtime champion of freedom. While the colonization movement never really took off in the way Garnet and other starry-eyed advocates envisioned early on, it did make a couple of lasting marks on history. The modern-day African nation of Liberia was founded by former American slaves (many of them from Maryland) who signed on to “return” to Africa even though most of them had never before set foot on the continent of their ancestors.

Garnet talked often in his later years about his desire to visit Africa, and even to die there. In 1881, he became the U.S. ambassador (the official title was “minister” back then) to Liberia. He died on Feb. 13, 1882, just a couple of months after presenting his credentials and taking over the post. He is buried at Palm Grove Cemetery in Liberia’s capital city of Monrovia.

–written by Jim Duffy and posted on on Feb. 2, 2018. All rights reserved for Secrets of the Eastern Shore/Whimbrel Creations LLC.