NOTE: This is an excerpt from my book, You Wouldn’t Believe! 44 Strange and Wondrous Delmarva Tales. Find out more about that (and my other books) here.

Another chapter in this book, “When Delaware Delivered the ‘True Spirit of Christmas,’” tells the story of how the seasonal holly wreath industry took off in the late 1800s and early 1900s, starting in Southern Delaware and then moving into Maryland, where holly soon became known as “Maryland’s Christmas Crop.”

The unlikely mecca of that crop was the little town of Fruitland, just below Salisbury. A holly farm market started up there around World War I, but it got off to a slow and drab start. A few vendors had tables set up on a vacant lot near the fire hall. A few customers meandered around.

The man who changed that atmosphere was an Eastern Shore character of the first order, Hurvey Mezick. Here is how he dressed:
He wears a brown overcoat, indiscriminately splattered with soup and gravy, and a battered hat that is adorned with safety pins.

Here is the executive summary of his resume:
Mr. Mezick is a farmer, canning-house worker, and auctioneer [who describes his various activities in life as] “a little of everything, not much of anything.

In the Spur of the Moment

Hurvey Mezick found himself wandering through that drab little holly market one day. Sales seemed slow. Everything was too quiet. He decided to take matters into his own hands:
While buyers were picking over the wreaths I just jumped up and shouted, “I bid five, I bid six, I bid 10, I bid 11 … Are you done? Are you done? Sold!” … I just felt moved that day.

Mezick sold a slew of holly with that stunt. Farmers started offering him a piece of their proceeds if he would per- form his fast-talking schtick with their wreaths. Soon enough, the whole market was transformed, with Hurvey Mezick now at center stage. Customers gathered in front of a stage. Trucks rolled up one by one, taking their turn under the Mezick spotlight:
Every time he mentioned a new [price], one of the dealers indicated he would buy at that price by closing his eyes, nodding his head, or turning his cigar at a slight angle. 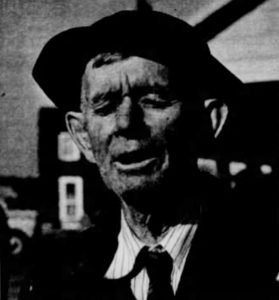 Hurvey Mezick in his 70s

Mezick’s flair for showmanship turned the Fruitland auction into a big hit. Every year, newspapers from near and far wrote stories about the colorful auction in “Maryland’s Holly Capital,” which was the only auction of its kind in the country. Those stories almost always told the tale of Hurvey Mezick, accidental auctioneer.
Trucks, cars, and jalopies of all descriptions line up for the sale day in the streets. …

The Fruitland auction outlasted the man who put it on the map. Other auctioneers worked the market after Mezick’s death in 1947. The event closed up shop once and for all in the late 1960s.

Deep in the Pocomoke Forest

Before winning fame as Fruitland’s auctioneer, Mezick tried his own hand at the holly wreath game. That work would begin with holly-hunting journeys deep into the dense, swampy forests along the Pocomoke River and its tributaries. Here he is, remembering:
It sounds easy but it was a lot of work. You go into the swamp and you get interested in what you are doing. First thing you know you are lost. Sometimes it takes you three or four hours to cipher just how to get out. You always try to stay on high ground but before you know it you go swosh into the mud up to your knees or your waist. Then you try another way out and keep on trying till you make it. 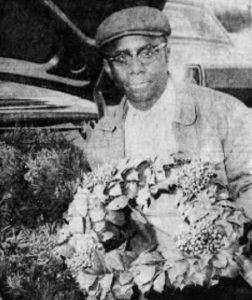 One time, in a down year for berries, Mezick found a grove of spectacular holly, “flaming with red.” He and his brother offered the landowner $210 for exclusive access.
That was the most beautiful holly I ever saw—long sprays of shiny leaves, thick with real red berries.
Mezick and his brother didn’t make wreaths out of that holly. They spent all their time gathering twigs and branches, which they then sold to middlemen. Locals used to call that way of doing business “box holly.” The brothers packed 500 boxes and sold them for $10 a box.
For two and a half weeks’ work, that was a killing. After we paid expenses we got about $1K each.

–written and posted by Jim Duffy on Dec. 14, 2021 for Secrets of the Eastern Shore/Whimbrel Creations LLC. All rights reserved.

• You can read about the holly wreath-making traditions of Southern Delaware here.

• You can read about the holly wreath-making traditions of the Eastern Shore of Virginia here.

• The photo up top here of a family making holly wreaths is in the collection of the Delaware Archives.