A Frederica Story: From Ladies Undergarments to Man on the Moon

Home / Way Back Machine / A Frederica Story: From Ladies Undergarments to Man on the Moon

Sometimes the stories Delmarva has to tell are hiding in plain sight. Consider, for example, the generic-looking, aluminum-clad buildings that make up the ILC Dover complex along Carpenter Bridge Road on the outskirts of Frederica, Del. Passersby could be forgiven for assuming this was just another warehouse or widget maker. The postal address contains a clue that something else is afoot: 1 Moonwalker Road. 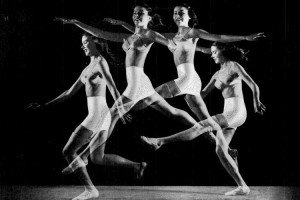 An advertising image for the Playtex Living Girdle

The ILC story begins several decades before man ventured into outer space. Founded in upstate New York in 1932, the International Latex Corporation moved to Dover in 1939. Early on, it produced bathing caps, swimwear, and baby pants. A breakthrough came in 1940 with the invention of a “Living Girdle” for women, which somehow kept its shape and firmness even after suffering little rips and tears. This was the birth of Playtex, a brand that soon became known the world over.

During World War II, ILC found itself cut off from Asian suppliers and hampered by domestic rationing rules. The company created a spinoff to focus on bringing in government work. Soon, that division was making rafts, canteens, and other latex products for the military. After the war, the original ILC took on the Playtex name and became famous as the first company to advertise underwear on national television in 1955. The brand is still going today, as part of the Hanes empire.

Meanwhile, ILC Dover started operating independently at 350 Pear Street, about a mile or so northeast of the governor’s mansion in Delaware’s capital. In those postwar years, it was making pressurized suits and helmets for U.S. Air Force pilots involved in high-altitude flight tests. 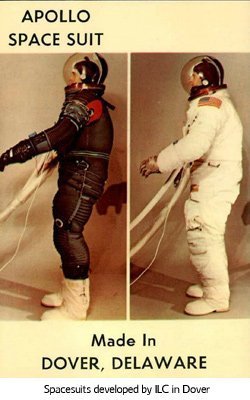 The story of ILC’s move into the space begins on Oct. 4, 1957 when the Russians launched a rocket called Sputnik into outer space. The shock of being beaten to the orbital punch by the Russians was a blow to American pride—and a genuine cause for military concern during those Cold War years. The country quickly set out to catch and then surpass the Russian space program. Early on in his brief time as president, John F. Kennedy famously promised to put man on the moon in one short decade.

That pledge got the attention of everyone at ILC. Homer “Sonny” Reihm was still a newbie electrical engineer at the company at the time, though he would eventually rise to the presidency of ILC Dover. The first inkling he had about the company’s future came the day he overheard a co-worker say, “We’re going to make a moonsuit.”

Talking with a magazine writer years later, Reihm described the work at hand as a mix of “art and science together.” There was fancy laboratory work involved, of course, and Playtex “had a treasure chest of technology” to call on. But the project also drew on the wisdom and talent of old-school seamstresses, applying key lessons they learned from perfecting the Living Girdle and and other Playtex products.

“We did world-class fabrication,” Reihm said, “and were especially good at rubber-dipping, which is key to making a spacesuit.” 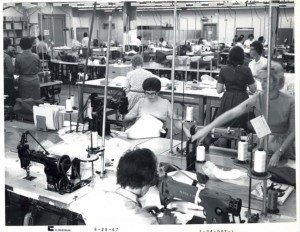 Seamstresses at work at ILC Dover

A writer from Wired magazine summarized the transition this way: “In some ways, it wasn’t an unimaginable leap, going from girdle mechanics to moonsuits. In other ways, it’s a breathtaking moment of zero-to-60 acceleration, akin to a manufacturer of bathtubs suddenly declaring it wanted to make battleships.”

By the mid-1960s, the program that eventually put a man on the moon had become known as Apollo. The moonsuit ILC developed for that project weighed in at 240 pounds. Just to be clear: That’s not including an astronaut. Twenty different layers of material went into the suit. Each finished suit cost upwards of $100,000 in 1960s dollars, or nearly $800,000 in today’s money. Quality-control testing basically involved beating the “heck out of our suits,” says William Ayrey, who now serves as the company historian.

During training, Apollo astronauts would have to visit Dover for fittings. Neil Armstrong famously described his 240-pound ILC outfit as “tough, reliable, and almost cuddly.”

Armstrong, of course, became the first man to step on the moon. When that happened on July 20, 1969, Sonny Reihm had a seat in mission control HQ in Houston. You would think he might remember it as a glorious affair, but mainly, he recalls it as a day of high anxiety.

“I couldn’t wait for it to get over,” he once said.

Just as that tense day was finally about to end, astronaut Buzz Aldrin started playing low-gravity games, bouncing and hopping his way along the surface of the moon much to delight of a whole nation, watching spellbound on television.

Reihm was not delighted by Aldrin’s antics, however. When that “silly bastard [was] out there running all over the place,” Reihm recalls, “I’m saying, ‘Get this crazy guy inside, the mission is over!’”

Most ILC spacesuits never came back to earth. Needing storage space and weight capacity for the lunar rocks they wanted to bring back to earth as scientific specimens, the astronauts left their suits behind. “We’ve littered the moon with materials like boots, backpacks and gloves.” Ayrey says. On the very last Apollo flight in 1972, astronaut Eugene Cernan did bring his suit back as a keepsake.

There is a historic marker on Pear Street in Dover honoring ILC’s contributions to the first moon landing and other Apollo missions. The company moved out to Frederica in 1975 and has continued making space suits for NASA, first for the space shuttle program and now for the International Space Station.

The company has also diversified into new areas, including blimps, inflatables, impact bags, safety equipment, and even pharmaceutical packaging. They’ve been expanding in recent years. As of 2017, the company had more than 350 workers.

One new technology on the way from ILC Dover is the especially intriguing. The Resilient Tunnel Plug was developed in the wake of Hurricane Sandy as a way to seal off the entrance to subway tunnels and other key bits of underground infrastructure in flooding emergencies. These plugs inflate in just 11 minutes, so they can serve as a last-second alternative that might prevent future incidents of long-term damage like that suffered by New York’s subway in the wake of Sandy.

Who knows? Perhaps that tunnel plug or some other future ILC innovation will make a world-changing difference as important as a moonsuit and earn the company another historic marker to be enjoyed by future generations.

• Here is a two-minute video of Buzz Aldrin bouncing on the moon.

• Among the articles I reviewed in putting this together were a profile of Sonny Reihm in the University of Delaware Messenger; a story about a photographer’s work depicting ILC Dover in Wired magazine; and one article about the company’s 70th anniversary in Delaware State News and another on the same occasion in the Wilmington News Journal.