By Secrets of the Eastern ShoreJune 28, 2020No Comments

In tumultuous times, we sometimes miss the forest for the trees. Wartime news ruled the day during the summer of 1813. Nearly 40 British ships prowled the Chesapeake Bay. The bad guys burned a pair of Maryland towns, Fredericktown and Georgetown, and attacked another, St. Michaels. A vessel named Chesapeake dominated newspaper headlines that June–she was a U.S. Navy frigate captured by the bad guys in the Battle of Boston Harbor.

But another vessel named Chesapeake should have been in the news that month as well. This boat made a little test run from Baltimore to Annapolis on June 13. Then she did a sort of soft-opening day trip to Rock Hall on June 19. Finally, the next week, she settled into regular duty, hauling cargo and passengers between Baltimore and Frenchtown, a town on the Elk River in Cecil County, Md. (it no longer exists).

She was an odd duck, this Chesapeake. She was 137 feet long and 21 feet wide. She weighed in at 183 tons. She had a mast and sail, like the other sailing boats of her day. Unlike them, she also had a smokestack, a big boiler, a noisy crosshead steam engine, and a 10-foot-wide paddlewheel.

No big headlines greeted the first steamboat ever to appear on the Chesapeake Bay. Who knew back then that steam power would set off an economic and social revolution destined to transform the region–and the whole country, really? Here on Delmarva, the speed and reliability of steamboats soon brought enormous gains to folks working in agriculture, seafood, canneries, and numerous other businesses. This was true in big cities and small towns alike. By 1900 or so, there would be more than 500 steamships crisscrossing the Bay and its rivers, calling at 300 different landings. Produce, products, people–most everything moved by steam.

Beginnings: Down on the Choptank

Trace that revolution back to its starting point, and you’ll come to an interesting Eastern Shoreman, Edward Trippe. The details of his childhood are lost in the mists of history. All we know is that he belonged to one of the oldest European families around in Dorchester County, Md.–the first Trippe to arrive on the Choptank River did so in the 1660s. Edward came along in 1771, born into a home at Todd’s Point in what people nowadays refer to as the Neck District.

As a young adult, Trippe became a “seafarer” and earned the title “Captain Edward Trippe.” Again, the details are few and far between. At some point, he moved across the Choptank to Talbot County, into a “country estate” set on a tributary of the Tred Avon River called Trippe Creek.

Trippe moved in some highfalutin circles as time went on. He became friends with a New York man, Robert R. Livingston. Quite the political bigwig, Livingston served first in the Continental Congress and then as the nation’s first secretary of the Department of Foreign Affairs. Later, President Thomas Jefferson appointed him to the post of minister to France. By around 1810, however, Livingston had retired from politics and gotten involved with a man named Robert Fulton, a fellow New Yorker. Fulton famously built the nation’s first steamboat, Clermont. She sailed for the first time on the Hudson River in 1807.

It was after one of Edward Trippe’s visits to Livingston in New York that he reportedly “returned to Maryland fired with belief that … he could construct” such a boat for the Chesapeake Bay. He rounded up two business partners and hired Baltimore shipbuilder William Flanagan to build Chesapeake at a cost of $40,0000.

The Frenchtown route was already quite busy with commercial vessels called sailing packets. But packets were unpredictable–their speed depended not just on the wind, but also on whether they needed to take shelter from a storm. The Chesapeake, by contrast, always made the 140-mile round trip in roughly 24 hours, traveling at a steady 5 miles per hour no matter the wind and weather. (The sail would be raised to take advantage of the wind when conditions were right.)

At Frenchtown, the cargo was unloaded from the boat and loaded onto railroad cars for a 16-mile trip to New Castle, Del. There, everything was unloaded and reloaded again–this time onto a commercial sailboat bound for Philadelphia.

Success: The Chesapeake Takes Off

Business started slowly because of the War of 1812. Sailings were often delayed or canceled to the presence of British warships. Once the battles died down, however, Chesapeake did just fine. She had no horn to announce her departure, the way later steamboats would. Instead, “the exultant firing of the swivel gun from the forward gangway” announced Chesapeake‘s”triumphal departure from her wharf.” In time, as one clever newspaper  writer would put it many years later, that became “a mournful sound in the counting rooms of her rivals.”

There are other fun idiosyncrasies to report about the way Chesapeake operated. There was no wheel on the boat, for instance. It was steered by tiller from the rear, with instructions relayed from a pilot at the front of the boat by word of mouth repeated along a chain of crewmen. Communication with the engine room was an adventure as well. Often, this was handled by way of the same sort of chain of repeating voices. But other times, the pilot would give orders by stomping out codes with his foot on the deck above the engine.

There was a women’s cabin at the back of the boat. The men’s cabin was between there and the steam machinery. The men’s cabin doubled as a dining room. There was no second deck–travel on the Chesapeake was a bare-bones experience. Luxuries wouldn’t come until much later in the game.

Encouraged by Chesapeake’s success, Trippe and his partners built two more steamboats and formed a company called the Union Line. He catered to some fancy customers, as the likes of Daniel Webster, Henry Clay, and Andrew Jackson traveled between Baltimore and Frenchtown.

Edward Trippe: The Man and His Glorious Commute

After the decades went by, newspapers did come to see the importance of Capt. Edward Trippe and his steamboat. Writing in in 1908, one scribe came up with this description, based on correspondence with family members and digging through old papers.

“Capt. Edward Trippe was a man of splendid physique, tall and distinguished-looking, with fair hair, frank blue eyes, and a manner as engaging as it was impressive and courtly. John Quincy Adams paid him the high tribute of saying that he was ‘a gentleman alike to President and to slave.’ … He was a man of imposing appearance, distinguished bearing, and remarkable grace of manner.”

One piece of Trippe’s story left me flabbergasted–and jealous. It seems that during his time at the top of his game with the Union Line, Edward Trippe had one of the greatest workplace commutes in the history of the world. Let me put this in geographic perspective for those of you who’ve been to downtown Baltimore: The reference to Camden Street below puts Trippe’s house in between the Inner Harbor and the Orioles’ baseball stadium.

“Captain Trippe resided, while in command … of the Union Line, on Charles Street, near Camden Street. During his residence in Baltimore, the waters of the river extended to the foot of the sunshiny garden that surrounded his house. Each morning when he was ready to take command of his vessel a four-oared barge came to his garden cate and in this he was rowed to his boat, returning the same picturesque fashion to his home at night.”

The Union Line kept growing clear into the 1850s, at which point it was purchased by the Pennsylvania Railroad. Trippe left eh business long before that, retiring “to his paternal estate in Dorchester County where he died Feb. 2, 1846, aged 75 years.”

What became of the Chesapeake? She deserves a place of honor nowadays in a big museum, but alas–no such luck. She served the Union Line for five years. No one seems to know what she did, if anything, for a few years after that, but there is a note in the papers of the National Archive that dates to 1820 and has this to say about the fate of Chesapeake: “Vessel broken up.”

–written and posted by Jim Duffy on June 28, 2020 for Secrets of the Eastern Shore/Whimbrel Creations LLC. All rights reserved. 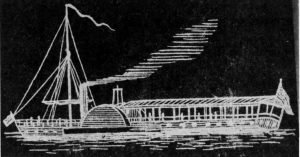 A rough sketch of the Eagle, the second steamboat on the Chesapeake Bay.

• The image up top here is not of Chesapeake–as far as I can tell, no drawing or other image of the Chesapeake Bay’s first steamboat survives. The drawing is of Clermont, the steamship that started plying the waters of the Hudson River in 1807 and inspired Capt. Edward Trippe to build Chesapeake. Nearby here is an image that may be even closer to what Chesapeake looked like–it’s a rough sketch of The Eagle, the vessel that Union Line built immediately after Chesapeake became a success.

• Capt. Edward Trippe was not the only transportation genius in the famous Trippe family. A later descendant, Juan Terry (1899-1981) became a Navy pilot during World War I and then, in 1927, founded the world’s first real airline company, Pan American Airways. My friend Jamie Baldwin tells of that connection in his book about Pan Am.

• Thank you for reading!