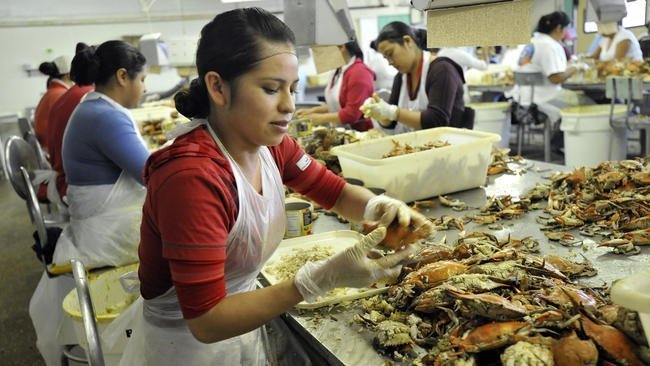 QUOTE OF THE DAY: “Never before had seen a crab. No, they didn’t know what to do with it.’

Home / Way Back Machine / Quote of the Day / QUOTE OF THE DAY: “Never before had seen a crab. No, they didn’t know what to do with it.’

Local crab houses first started bringing in Mexican migrants as crabpickers in the early 1990s. A few years in, the historian Virginia Jenkins conducted a slew of interviews at Eastern Shore seafood houses to try and get a handle on how everything was going. Here is one thing she learned:

Traditionally [on the Eastern Shore], women have taught their children or other family members how to pick crabs. [The local people] have learned by watching and doing. Until the Mexican workers arrived, many American workers believed that the skill was one that had to be learned in childhood and that it took years to perfect.

According to their contracts, the migrant crab pickers are supposed to be able to pick twenty-two and three quarters pounds of meat a day after three weeks of training. Many of the new Mexican workers had never seen a crab before coming to work in Maryland. The rapidity with which the Mexican women learned surprised everyone.

“That’s what I can’t understand about the Mexicans. They can come in one day and if you’d sit there and watch them, they’re pulling the crab all apart and pulling the meat out with their fingers and everything. And then the next week they’re weighing more meat than the other girls are weighing.”

She continued: “In a week’s time they can do it. [After that, if] you stand there then and watch them, they know exactly what they’re doing and everything. They’re just smart people, and they’re willing to work. But they do, they pick pretty meat, and they get it every bit out.”

Another elderly picker said: “They learned to pick that crab fast. I showed them how and now their little hands are flying just like this, picking that meat out. Never before had seen a crab. No, they didn’t know what to do with it. No indeed. They looked at me like I was crazy [at first], and I would try and teach them. …”

She continued: “It was only one or two who could talk English. They’d look at the others, and they would tell, little voices were all over the place, and I didn’t know what they were saying either. But in two days’ time, I had them all picking crabs.”

The title of the report is “Learning to Pick Crabs: Mexican Migrant Workers in Dorchester County, Maryland.” It was published in 2001. It doesn’t seem to be on-line. I can’t remember how I came into possession of a hard copy, but I did.