In the Christmas classic “It’s a Wonderful Life,” George Bailey is trying to do the right thing by his neighbors in small-town Bedford Falls. By setting up a community-owned banking cooperative–Bailey Building & Loan–he wants to offer those neighbors a fair, homegrown alternative to the bank owned by Mr. Potter, the greedy and heartless antihero of the piece.

That 1946 film came to mind as I dug into the history of an organization called the Eastern Shore Produce Association. Based in Onley, Va. it was not so different from Bailey Building & Loan, really, except that it was a farming cooperative rather than a banking one. It even came into existence for similar reasons–to try and help local farmers win their struggle against the “Potterville” greed of big-city markets.

The story begins in the late 1800s, which were tough times for farmers on the Eastern Shore of Virginia. Year in and year out, those small family operations were getting ripped off in those big-city markets.

This was happening against the backdrop of bigger changes in the world of commerce. The farming economy of Virginia’s Eastern Shore endured a long rough patch in the decades after the Civil War. Before that war, in 1850, Accomack County had 223,000 acres in cultivation. Two decades later, that number had dropped to 162,000 acres.

Struggling to make ends meet, a lot of farmers abandoned their fields and turned themselves into watermen, chasing the oyster boom that was then getting rolling. That proved only a short-term fix, however. The oyster boom had started to fade by the end of the century, thanks to over-harvesting, environmental, and other issues.

The railroad arrived on Virginia’s Eastern Shore in the 1880s. Steamboat lines expanded like crazy during that same decade. Both advances promised to give farmers speedier, more reliable, and more predictable access to distant big-city markets–Baltimore by steamboat and Philadelphia and New York by rail.

Seeing a pot of gold at the end of this transportation rainbow, families returned to the fields. In the process, they shifted away from corn and oats and into more perishable products–the so-called “truck crops” of sweet potatoes, white potatoes, cabbage, onions, and berries. Transportation advance gave those goods a much better chance of reaching the big cities before going bad.

When you read short little historic markers and other summaries of life on the Eastern Shore, you will see phrases that imply business boomed for farmers after the arrival of steamboats and the railroad. But in reality, that pot of gold was a mirage at first. The economies of big cities were messy and complex, especially for small, independent family-run farms trying to figure new things out from hundreds of miles away, with no access to things we take for granted, like telephones and computers.

Everything about those big-city markets was structured in ways pretty much guaranteed to rip off the little guys from places like the Eastern Shore of Virginia. Here is a down-and-dirty summary:

Year in and year out, then, Virginia’s Eastern Shore farmers received paltry payments. The lucky ones covered expenses and put food on the table. The unlucky ones couldn’t even manage that. In a 1926 dissertation for a master’s degree at the university we now know as Virginia Tech, Jacob L. Maxton put it this way: “Each year brought its quota of bankruptcies.”

FROM DESPERATE TO TRIUMPHANT 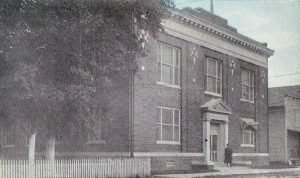 A miraculous turnaround started in the year 1900. Basically, what happened is that the poor, cash-strapped, little-guy farmers of Virginia’s Eastern Shore banded together like an army of agricultural George Baileys and conquered those Potterville markets in the big cities.

As names go, the Eastern Shore Produce Exchange may not have any poetry in it, but the results that organization achieved for its members were truly astounding. Here is the bottom line on that miraculous turnaround, from a 2006 writeup by the Virginia Foundation for the Humanities:

HOW THE MIRACLE CAME ABOUT

As far as I can tell, that credit belongs to an ever-changing cast of characters, including board members, farming members, and exchange employees. Do you remember the scenes from “It’s a Wonderful Life” where all the local “little” people are crowded into a big room, going back and forth about how awful things are and what to do about that and whether everyone should get on board with this newfangled Bailey Building& Loan idea? On the Eastern Shore of Virginia, the first of those meetings was held in the town of Keller at 2pm on the afternoon on Sept. 9, 1899.

The session was convened in the name of an elder statesman of the farming community, William L. Elzey, who lived along Seaside Road between Exmore and Nassawadox. Among the key people on the 12-member committee that emerged from that meeting were A. J. McMath, Benjamin T. Gunter, G. Walter Mapp. 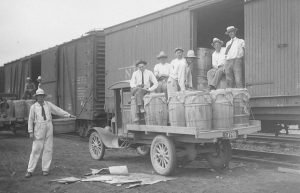 In short order, that committee recommended the establishment of a cooperative “marketing organization” that would take over advertising, sales, and delivery of products grown by farmers who signed on as “members” of the proposed exchange. That fall, committee members unveiled their plans at a series of “mass meetings” held up and down the Virginia peninsula. To become a “member,” farmers had to buy a $5 share in the new venture. Early on, they were allowed to put 25 cents down and pay the rest later.

In a chapter devoted to the exchange in his 1915 business-advice book, How Farmers Co-operate and Double Profits, Clarence Poe had a blunt explanation for why so many farmers took a chance on this newfangled idea: “The organization was born out of poverty and disappointments.”

The Eastern Shore Produce Exchange launched operations in the spring of 1900. The system that was soon up and running looked like this:

A GROUNDBREAKING WAY OF DOING BUSINESS

For the most part, all of this was uncharted territory. West Coast farmers set up a California Fruit Growers Exchange in this same time frame, but the Eastern Shore Produce Association is widely regarded by historians as a truly groundbreaking operation.

Writing in the Peninsula Enterprise in 1931, Gordy Williams put it this way:

“This organization was established almost without precedent, and its early days were fraught with difficulties. … No warning of the many pitfalls that would beset their path was given, and no financial assistance from the government was solicited. They were pioneers, but they had faith in their organization and persevered, largely blazing their own trail, and they were destined to revolutionize the marketing of farm products.”

A similar conclusion appears in a 1961 article published (without attribution to a specific author) in an Eastern Shore of Virginia history project run by the University of Virginia and called “The Countryside Transformed.”

Finally, here is a key conclusion of that 1926 dissertation I mentioned earlier:

“From a small concern whose enemies predicted its failure year by year, [the Eastern Shore Produce Exchange] has reached a pinnacle well above that attained by any other co-operative produce marketing concern in the United States.”

In short order after its founding, the organization set up departments dedicated to sales, research, advertising, education, claims, and grower services. In time, the association expanded its market reach beyond the East Coast, into the Midwest, up into Canada, and over to Cuba. The exchange had seasonal, salaried employees working to sell Eastern Shore produce in Boston, Providence, Buffalo, Cleveland, Montreal, Toronto, Detroit, Chicago, Cincinnati, Scranton, and elsewhere.

One thing worth noting here that the association’s membership was not very well educated by today’s standards. The Eastern Shore of Virginia had its share of prominent families that sent children off to college, to be sure, but that was not the way things worked in the general population of farming families. Virginia didn’t establish public schooling until 1869, and in those early decades only one-third to one-half of the state’s children were enrolled. A much smaller number made it to graduation.

And yet, as early as 1902, the Baltimore Sun was using these words to describe an annual meeting of exchange members: “A happier and more enterprising body of farmers has seldom been gathered together on the peninsula.”

The aforementioned writer Clarence Poe has a humorous note in his book that gets at just how prominent and important the Eastern Shore of Virginia Produce Association was in the early 1900s. Poe recalls a research trip to Onley when he was accompanied by a colleague named Professor W.R. Camp:

“‘I reckon that’s the courthouse,” said Professor Camp to me as we walked through the little town … and came in sight of the handsomest building in the place. But it wasn’t the courthouse at all. It was the home office of the Eastern Shore of Virginia Produce Exchange, as a large sign across the front quickly informed us”

The produce association continued in operation until the 1950s, which was another period of big changes in agriculture. In that decade, regional farmers starting to lose ground to produce grown in warm-weather locales like Florida and California. However, I have not come across a detailed explanation of the circumstances around the demise of the produce exchange. That 1961 article published by the University of Virginia, published shortly after the exchange shut down, put the bottom line like this:

“[D]uring the fifty-five years of its existence [the Eastern Shore Produce Exchange] returned to the farmers of the Shore probably more than a quarter of a billion dollars.”

–written and posted by Jim Duffy on July 28, 2020 for Whimbrel Creations LLC/Secrets of the Eastern Shore. All rights reserved.

“In order to explain more readily the Exchange’s method, let us describe a typical day’s work in the shipping season. The first thing the officers do is to phone the Exchange’s forty-three [local] agents, the men employed to represent at forty-three shipping points scattered all over the two counties, and find out just how many cars will be offered for shipment.

“Oak Hall, say, will report three cars ‘[Red] Star brand,’ Tasley one or two unbranded, Onley five cars ‘[Red] Star,’ and so on. Then the totals are footed up, and it is up to the Exchange to sell them for the growers. By 8 or 9 o’clock telegrams report the prevailing New York prices and New York prices, of course, determine prices in a considerable area around New York.

“If New York prices are low, then the Exchange may wire its agents in Chicago, Pittsburgh, Toronto, [Boston], and Scranton, and the Exchange officials will also wire as many jobbers in other cities as the size of the day’s business seems to require. Perhaps the telegram will read: ‘We offer you today one car Red Star $2 barrel.’ Perhaps a number of orders will be wired back at this price, but some jobbers will reply: ‘Cannot pay $2 here, but will take two cars at one ninety.’

“By 1 or 2 o’clock the Exchange officials have wired directions for shipping most of the cars, and they also know whether or not all the cars can be sold at the $2 rate. If all cannot be sold at this figure, some orders may be filled at $1.90, or perhaps some may have to be sold at $1.85, in markets where local conditions will not justify the higher price.

“Nevertheless, it would be manifestly unfair to pay one farmer $1.85 and another $2, when both had brought to Exchange officials the same grade of potatoes and at the same time. Therefore, it is the custom of the Exchange to pool prices or to average them so that on each day’s shipment all farmers will get the same price for the same grade of product.”