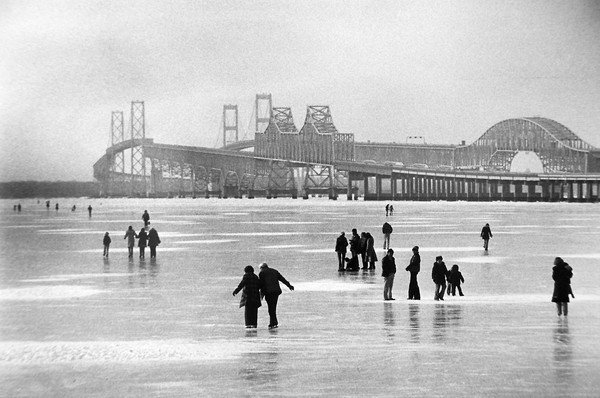 By Secrets of the Eastern ShoreJanuary 16, 202254 Comments

Deep freezes used to be commonplace affairs on the Delmarva Peninsula. Newspapers and diaries from the 1700s, 1800s, and 1900s are stippled with reports of cold spells so deep that miles-wide rivers froze up nearly from shore to shore, to the point where schooners and even steamboats couldn’t get through. When thaws began, giant ice floes rode the waves, toppling screwpile lighthouses and ripping oyster boats out of secure moorings.

As of this writing, nearly half a century has passed since the last genuine Delmarva deep freeze. But that last one was a doozy! Between mid-December 1976 and mid-February of 1977, the peninsula endured two months of temperatures so bone-chillingly cold that the National Oceanic and Atmospheric Agency rated it as the “coldest winter on the East Coast since maybe the founding of the Republic.”

By Christmas Day the ice had started inching out from creeks and rivers into the Chesapeake Bay. The freeze soon reached into vast expanses of water that almost never see ice. The late photographer Bob Grieser took a famous shot showing dozens of people ice skating off the shores of Kent Island under the shadow of the Chesapeake Bay Bridge. Another of his shots has one kid driving a tractor on the ice, while the other hangs on for dear life atop the sled tied to that tractor.

Sharing the Misery: Snow in Miami!

Delmarva residents did not shiver alone that winter. During this same period, 49 East Coast cities recorded record low temperatures. Snow fell in the Miami area for the only time in recorded history. Incredibly, the same thing happened on Grand Bahama Island.

Meteorologists at the time were a bit mystified. Some attributed the freeze to a strange and out-of-place stretch of high pressure over the Mississippi River Valley, which forced to the south a cold front that in any normal season would have stayed hundreds of miles to the north.

Back on Delmarva, shipping in the Chesapeake and Delaware bays slowed to a standstill. Two barges carrying a combined 1 million gallons of heating fuel got stuck, one at the mouth of the Wicomico River and the other at the mouth of the Nanticoke River. Government officials issued dire warnings about the imminent need to ration supplies of home heating fuel. Those fears never came to fruition, but it was the first time anyone on the Eastern Shore had thought about fuel rationing since World War II.

President Jimmy Carter declared a state of emergency for the area in a nationally televised address in which he famously wore a casual cardigan while urging everyday Americans to turn down their thermostats. The hit television series Roots aired in January of 1977—folks watched it with multiple blankets piled atop their laps. 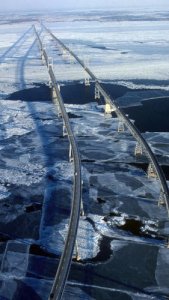 An aerial view of the Chesapeake Bay Bridge (Baltimore Sun).

The ice skating in that famous Bob Grieser photo wasn’t the only type of fun the locals engaged in during the deep freeze. In St. Michaels the yacht-racing crowd on the Miles River got busy attaching gliders to their boats and conducting hastily planned ice races. Writing in the “Beautiful Swimmers” blog of the Chesapeake Bay Maritime Museum, Ken Noble recalled a magical day in Chestertown, Md. when he and a friend “skated from High Street to Quaker Neck Landing and back—about 13 miles down” the Chester River. He marveled:
We could very well have skated to Baltimore!

The freeze left Smith Islanders out of touch with civilization for nine long weeks. They did catch a bit of a break when, on orders from Governor Marvin Mandel, the state had essentials flown in by helicopter. Captain Eddie Somers, a native Smith Islander, put the deep freeze in perspective this way:

It seems like each generation of watermen has a benchmark winter that stands out to them. For my dad, it was 1936. For my grandfather, it was sometime in the teens. For me, it was 1977. That was the worst ice I’ve seen. No one was working.

Watermen up and down the Shore found themselves in the same bind. With hundreds of workboats idled, seafood processing houses had to shut down for lack of oysters. Thousands of people flocked to unemployment offices in search of temporary benefits. Oyster prices soared to a then-unprecedented $10 a bushel.

But watermen are a resourceful breed. Soon, some of them started operating in the manner of Inuit hunters up in the Arctic, or Minnesota fishermen. They hauled out chain saws to cut holes in the ice and commenced hand tonging. In order to get their catch to shore, they had to buy up just about every child’s sled in stock at stores all over the Eastern Shore. 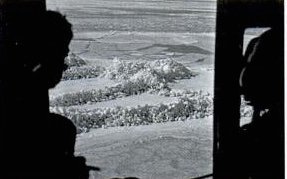 In Sussex County, Del., residents took it upon themselves to venture out on missions of mercy to feed the large numbers of waterfowl who were unable to feed on frozen farm fields. At one point, the state’s chief biologist trucked half a ton of corn into the Indian River area near Bethany Beach.

There is one place today where you can get a first-hand look at the impact of the deep freeze, though you’ll need a boat to get there. The combination of strong tides and heavy ice tilted Sharps Island Light (near Tilghman Island, Md.) by an angle of 15 degrees. Folks back then were sure that the light was going to topple over before the freeze came to a close.

It’s the only caisson-style beacon in the Chesapeake Bay to ever suffer that kind of damage. After the thaw experts replaced the old glass lens with a new plastic one that was mounted on a leveling plate to compensate for the strange angle. Yup, it’s still tilted out there—our own Eastern Shore Leaning Tower of Pisa.

Jessie Marsh was a 12-year-old boy living on Smith Island that winter. He would grow up to become an educator with Chesapeake Bay Foundation—a few years ago, he served up this vivid memory in a foundation newsletter:

Pretty much every year as winter arrives I post a little something on Facebook about the winter of 1977. It’s such a rich memory for so many folks. I have put earlier versions of this story up on the Secrets of the Eastern Shore website, too. In both places, people love sharing memories of the last great Eastern Shore deep freeze. 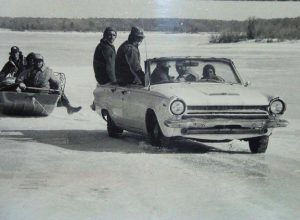 • Janet Van Horn: I walked across the [Chesapeake] Bay that year!

• Terry Norville: OMG, people were driving cars on the ice!

• Maeve Finn: Being 16 at that time, all I have are fond memories of that winter. I lived on the Choptank River. Everything was frozen and white. You would step off the sea wall onto ice. Your private ice river! I would wear two coats, the second one a no-sleeve vest. All you had to do was open it up [the outer coat] like you were flashing someone and, BAM, you were off! So fast it felt as if you were flying. We got good at this. We learned to use the inner vest almost as if it were a rudder.

• Jon Abbott: I remember the hardship my parents and other watermen families endured that winter.

• Sue Haddox: Shhhh, don’t tell my dad, but we did donuts on the ice in Ed’s Mustang.

• A man calling himself “Major”: I’ve got pics of my old man and his friends seven miles off the Eastern Shore of Virginia, standing on twenty-foot-tall pressure ridges during that freeze. 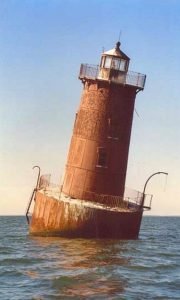 • Susan Webster: That was the year the ocean froze at Ocean City. It was eerie standing on the beach and hearing nothing, no waves.

• Louise Windsor: It was about 13 weeks that the Deal Island Harbor was iced over, so bad that several boats broke apart from the pressure of the ice. I remember National Geographic came down and did a lot of photos, many aerial photos which were published in their magazine. It was a devastating time but so awesomely beautiful too.

• Terri Pleasanton: I was 18 and dating a guy whose family was from Tangier Island. We took the mail boat over to attend a New Year’s party that year. Long story short, we were stuck there for a week! I sat in the bathroom next to a kerosene heater reading a stack of National Geographics. After a week my mother hired a plane to pick us up. I’d never flown before, was scared to death. I remember looking down and seeing the Coast Guard cutters trying to get through.

• Tina Swift: I remember that we still had to go to school!

• Lenny Thomas Jr.: That’s the freeze when I was 11 years old. I almost died. It was 30 mph winds. We skated out [such a long way, and] I tried to skate back. I was so cold. I was trying to fall asleep. I wanted to go to sleep. My buddy got home, and somebody rescued us.

• Alice McJilton-Fox: I remember the Wicomico River being frozen solid that year. Coast Guard cutters had to come up and down the river to break up the ice so oil barges could get through. What a noise the ice made when it was breaking up, an eerie sound, especially during the middle of the night!

• Patti Willis: I remember watermen were tonging out of the backs of pickup trucks parked on the Chesapeake Bay.

Do you have winter of 1976/77 memories to share? Feel free to add them in here in the comments below. I will jump back in here once in a while and add the best images and anecdotes to the main story here.

Thanks so much for spending a little time with this story. Here again is where you can find information about You Wouldn’t Believe! and my other books.

—Written by Jim Duffy for Whimbrel Creations LLC/Secrets of the Eastern Shore. All rights reserved.