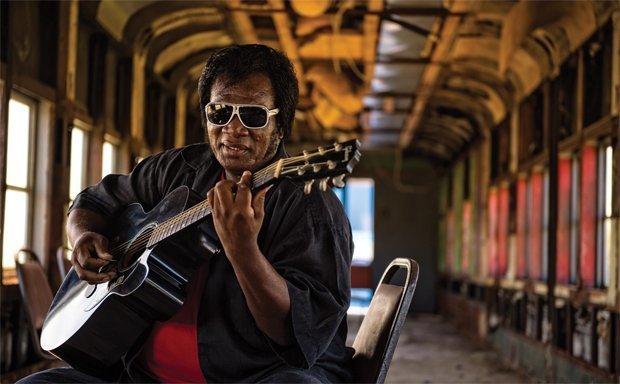 From the interviews I’ve seen, it seems that Clarence Giddens is rather cagey on the subject of his age, so there is no nailing down a detailed time frame for the day quite a few years ago when he was at a cousin’s house and Elvis Presley flashed across the television screen. About the only thing we can say for sure, time-wise, is that the image was in black and white.

“Never seen a white guy move like that before,” Giddens recalls in one of the many TV interviews he’s done over the years. Before that day, Giddens’ musical idol was James Brown. Afterwards, he was on a path toward becoming the best Black Elvis on the planet.

Giddens was born in itty bitty Painter, which is above Exmore and below Onley along Route 13 on Virginia’s Eastern Shore. His mother was a devout Christian, and she worried sometimes about bad musical influences in her son’s life. There were times, Giddens recalls, when he had to hide in a closet while listening to some of the baudier entries in the Elvis catalog. 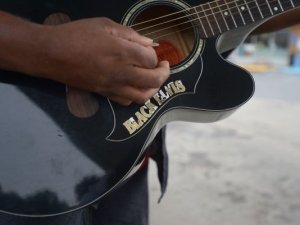 At first, the young man from Painter became, well, a house painter by trade. It wasn’t until the mid-1990s that he started making a name for himself as an Elvis impersonator. Soon thereafter, word about the quality of his live shows began spreading beyond his home turf on the Eastern Shore. Bookings in Virginia Beach came first. Later, there would be radio appearances with Howard Stern and TV spots with Arsenio Hall and Geraldo Rivera, among others.

He even appeared in full Elvis regalia in Hollywood’s “Honeymoon in Vegas.”

There is a fun live shot from one of the TV interviews I’ve seen where Giddens is up on stage at a roadhouse in Onancock, telling the audience, “Only in America, ladies and gentleman, could there be a Black Elvis.”

That kinda sums up the whole story for me.

• Here, you can watch a lengthy television news interview with Black Elvis on the Fox station in Baltimore.  And here is a Baltimore Sun story about Black Elvis from back in the mid-1990s. And here is video of Black Elvis