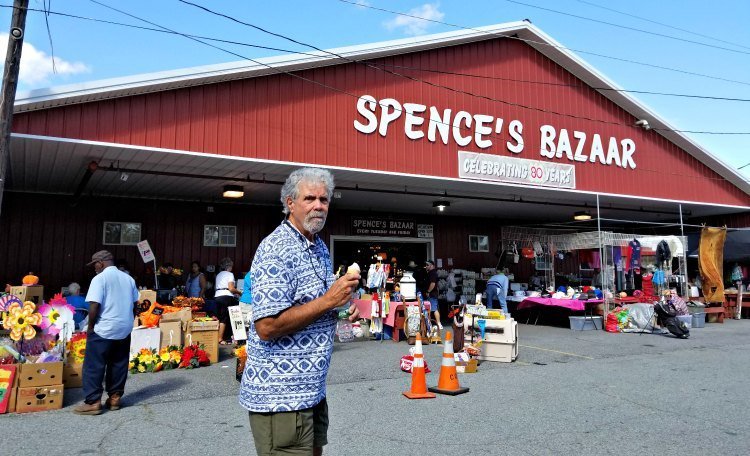 Delmarva traditions can be funny things sometimes. Take Spence’s Bazaar in Dover, for example. When I approached the sprawling old marketplace for the first time recently, it had the look of a joint that hadn’t changed one iota since the day it opened eightysome ago.

The flea market outside was old school, with table upon table upon table set under sweet shade trees. A trio of older guys had gathered around a mysterious old iron tool set on one of the tables. “I think maybe it’s a pipe cutter,” one guessed with a shrug. There is a hitching post where Amish merchants who still follow old ways can tie up horses. Inside the main building, Amish merchants are mostly dressed in traditional garb while staffing stalls filled with sweet temptations—cheese, meats, butter, pastries, and much more.

I was hungry by the time we arrived. I’d spent the previous few hours wandering the backroads of Kent County, Delaware with Mike Richards, a man with deep family roots in the area and a vast store of knowledge about local history. We had stumbled into each other by accident a couple of months back in a Quaker graveyard and then somehow came to the conclusion that a field trip was in order. (That’s Mike enjoying an after-lunch ice cream cone in the photo up top, by the way.)

Already that morning, we had strolled through an old Quaker Meeting House in Camden; stood alongside Tidbury Creek and talked about old steamboat days; and tromped around Wildcat, the estate of the storied Hunn clan, whose members have included both a famous Underground Railroad agent and a governor of Delaware.

Believe me, Mike knows his Delaware stuff, so when he said Spence’s was the place to go for lunch when in Dover, I just nodded my head. We both ordered pulled pork sandwiches from one of the booths. Mike asked for mustard on top of his, so I did, too, and that mustard was tasty as all get out. It was well past the traditional lunch hour on an October Tuesday, but we still had to hunt around for the last open table in the whole sprawling place. Apparently, it’s pretty much always like that on Tuesdays, Fridays, and Saturdays—the three days of the week that Spence’s is open. 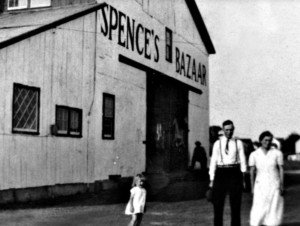 The story behind the Bazaar dates back a century, to 1919. That’s when Harry and Emmaline Spence (they are in the photo here, with a granddaughter named Anne) pulled the plug on a dairy farm in Marydel and bought a 30-acre fruit farm in the countryside west of Dover. The fruit farm did pretty well for a while, but Harry had his eye on bigger things. He had the notion that he wanted to start up a farm auction. Emma was skeptical—she thought the project was too expensive.

Harry finally won out and took the plunge in the early 1930s. He bought the remains of an old cannery operation at a place called Flemings Landing in the southern part of Kent County. The Spences and their friends tore that place down piece by piece and then put it back together on their property outside of Dover.

The auction was a traditional farm affair in those early years, with produce, meats, and livestock. It wasn’t until the 1960s that the Spences decided to clear out a number of animal stalls and rent them out to flea marketers. It wasn’t until the 1970s that an Amish farmer showed up for the first time. This, then, was the point that the Spence’s we know today started to come into being.  Dover had grown enough by this point that the market was no longer in the countryside but right in the middle of a growing little metropolis.

Disaster struck in the year 2000—the main building was brought down by an arson fire. The story of the rebuilding is a sweet one. As I mentioned, Spence’s was a city operation by this point, but the neighbors here in Dover responded to the fire in a way we tend to associate more often with rural communities. They had an old-fashioned barn raising, basically, with military veterans and Amish farmers and local craftsmen all turning out in force to pitch in and get a beloved local institution back up and running.

The place was back in business soon after that, once again drawing overflow crowds just like the one that Mike and I encountered on our visit in the fall of 2017. Another landmark is on the horizon for Spence’s as of this writing: Come spring of 2018, Spence’s Bazaar will be celebrating the 85th anniversary of the day of its first auction in May of 1933.