By Secrets of the Eastern ShoreDecember 31, 2020No Comments

Home / Destinations / On the Rocks at Cape Henlopen: Breaking New Ground Since the 1800s

This is a free excerpt from the revised 2nd edition of Eastern Shore Road Trips #1: 27 One-Day Adventures on Delmarva. Every chapter in that book has an afernote like this, telling a story from days gone by. This one appears in the road trip devoted to Rehoboth Beach. Thanks for reading!

Sometimes the best stories a pretty scene has to tell are actually hiding in the shadows. Consider Delaware Breakwater East End Light, which stands just off sliver-moon shape run of beach at Cape Henlopen State Park. The stately beacon has five levels—entrance, kitchen, bathroom, sleeping quarters, and watch room. The light up top is 61 feet above sea level.

She was built in 1885, but the story I want to focus on goes back quite a bit further. As you’ll see while standing on the beach, Delaware Breakwater East End stands near the end of a long run of giant, shadowy rocks. Those rocks are known as the Delaware Breakwater, which ranks as one of the earliest big public works projects in U.S. history.

Johns Quincy Adams was our sixth president, but he was perhaps the first to be in favor of getting the federal government involved in fixing up some of the horrible transportation infrastructure in the still-young country. When he looked around for the most important projects to take on, Cape Henlopen landed at the top of his priority list.

Located along a key trade route into Philadelphia, the cape was a highly dangerous place. Lots of vessels got caught up on tricky, ever-shifting shoals here. To make matters worse, no shelter from storms could be found anywhere around. Nearly 200 ships were wrecked or disabled hereabouts between 1807 and 1826.

A First for the Western Hemisphere

By the time Adams got elected, merchants and sailors were begging for something to be done. The project that Adams embraced ranked as an engineering marvel in those days—this was the first breakwater ever built in the Western Hemisphere and just the third in the world, after one in France and another in England.

The designer of the project was Philadelphia architect William Strickland, who is often credited in history books with helping to launch the Greek Revival style in America. He also designed an earlier, long-gone lighthouse that was located near where Delaware Breakwater East End stands today.

Construction on the breakwater began in 1828. Do you know how modern-day infrastructure projects seem to drag on and on, causing delays and lane closures? Consider yourself lucky: Work on the breakwater stretched on for four-plus decades, lasting clear into the 1870s. More than 800,000 tons of stone were dumped into the water to create a main 2,100-foot breakwater and a separate 1,700-foot “icebreaker.” 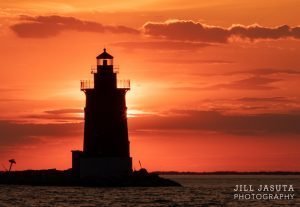 The line of rocks rising above the surface here is about 20 feet wide. The foundation of rocks at the bottom of the bay is 145 feet wide.

The project took so long to complete that it was basically obsolete on the day it opened. The problem was size—shipping traffic had grown by leaps and bounds during those construction decades, so much so that as many as 200 ships would try and crowd into the fancy new breakwater during bad weather. Still other ships were stuck outside, unable to squeeze into the safe zone. Several ships got wrecked in an 1877 hurricane.

The first effort to try and fix this involved closing the gap between the breakwater and the icebreaker to make the safe zone a little bigger. A second, lasting solution came in the 1920s with the completion of an outer breakwater called the Harbor of Refuge that’s more than twice as long as the original inner one. A second lighthouse, also called the Harbor of Refuge, stands out there as well. That addition stretched the size of safe harbor available here to more than 1,000 acres.

The Delaware Breakwater in late 1800s

Considering how many ships, lives, and dollars they saved, the two breakwaters have earned their shared spot in the National Register of Historic Places. Apparently, the only people left out in the cold were, according to one historical account, “the hardy souls who make their living from salvaging wrecks and the ‘anchor sweepers’ who swept the bay bottom in search of … scrap iron.” These ghoulish operations went out of business after the revamped breakwater made things much safer.

The sunset photo you see here by Jill Jasuta Photography is available as a print in various formats over at the Shore Store on this same site. To see the bigger selection of Jill’s photos, try this link. Also, here is Jill’s Facebook page.