When her time came, Harriet Tubman was ready. Among the last recorded words of wisdom that we received from the Eastern-Shore-born heroine of the Underground Railroad comes to us by way of suffragette and civil rights activist Mary Burnett Talbert, who made a pilgrimage to upstate New York upon hearing that Harriet’s health was failing.

It was February of 1913. Harriet had been living in the town of Auburn for more than half a century by this point. The last two of those years she found herself unable to live independently, choosing instead to move into the old folks’ home that bore her name. She had labored mightily over many years to open that facility up as a place where elders in the African American community could spend their last months and years feeling secure and well cared for.

Talbert shared her impressions of Tubman in a letter to the New York Age newspaper:

“She is but a shadow of what she was.”

In fact, Tubman was so frail by this point that a nurse was at her side 24/7. She barely left her bed.

“Her room, thoroughly sanitary–white and immaculately clean–was brightened with flowers. The room is kalsomined white, and the furnishings are white enameled.”

Talbert did have some good news: Harriet’s “mind was clear.” The two of them talked about the years Tubman spent in slavery on the Eastern Shore of Maryland, in Dorchester County. Talbert was hoping to figure out Harriet’s age. No one back then kept a record of the day or year Harriet came into the world. Only rarely did slave children know their birthdays.

The best the two of them could figure out is that Harriet must have been in her 90s. They calculated this through Harriet’s guesstimate that she was a young woman on the famous “night the stars fell”–the Leonid meteor shower of November 1833. At the time of her death, most folks thought she was 98. Modern-day scholars say she was probably 91 or 92.

‘Hope for her recovery was abandoned this afternoon.’

Talbert and Tubman didn’t hesitate when it came to discussing the fact that Harriet’s days were numbered. Everything Harriet said about this turn of events was suffused with faith in God.

“I’ve been firing up a long time for my journey, but now I’m almost home.”

“God has shown me the Golden Chariot, and a voice spoke to me and said, ‘Arouse, away, sleep no longer: Jesus does all things well.” 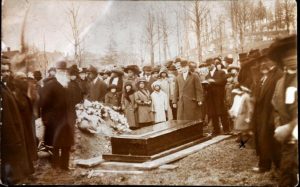 The end came a few weeks later. On March 10, nurse Martha Ridgeway and Dr. G.B. Mack concluded that Harriet’s time would probably be up in a matter of hours. Among those who rushed to her bedside to say goodbye were several close friends, including a pair of preachers, and a number of family members, including a nephew and some grand-nephews and grand-nieces.

That gathering turned into a makeshift religious service. The local Auburn Citizen newspaper reported that Harriet “directed” that session, though it’s not clear what that meant, exactly. Perhaps she made requests for songs to sing and scriptural passages to discuss. She joined in some singing, between coughing fits. She received the sacrament.

“The final scene in the long drama of her life was quite as thrilling as the many that had gone before.”

At one point, Harriet “blurted out in thick voice” words inspired by a passage from the Gospel of John:

“I go away to prepare a place for you, and where I am ye may be also.”

She remained “conscious to within a few hours of her death.” She passed away at 8:30pm on March 10.

The Funeral: “I will feel eternally lonesome.”

Harriet Tubman’s funeral was a four-act affair. On the morning of March 13, several hundred local Auburnites and various visiting dignitaries held a service at the Tubman Home. Later that afternoon, Harriet’s body was moved to the AME Zion Church on Parker Street.

There, Harriet lay in an open casket from noon until 3pm as perhaps 1,000 mourners filed through the church to pay their respects. Her body was clothed in a black dress and waistcoat. Pinned on the coat was a medal that Queen Victoria of England had sent to Harriet upon learning of her great exploits along the Underground Railroad. In her hand was a crucifix given to her by a local Catholic priest. 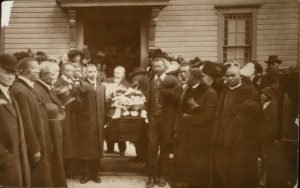 Countless floral decorations adorned the church. Her casket was draped with an American flag. The lady managers of the Tubman Home acted as a “guard of honor” during visitation. A delegation from the Charles H. Stewart Post of local Union Army veterans came in a group.

When it came time for an actual service, about 500 people could squeeze inside to hear a run of eulogies. Others lingered outside the church. A few snippets from those eulogies:

Bishop George Lincoln Blackwell of Philadelphia:
“If we could grow a race of Harriet Tubmans, the future of our people would be secure. The battle she fought for freedom will continue. She sought freedom, physical, intellectual and moral.”

Rev. C.A. Smith (who had met Tubman while serving as Union soldier):
“My mother is gone. I learned to call her mother on the battlefields in Maryland and Virginia. I will feel eternally lonesome.” 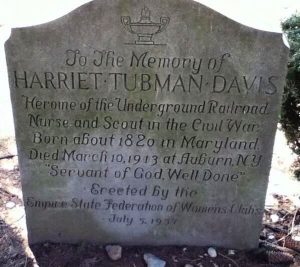 John F. Jaeckel, president of the Auburn Common Council:
“I may say that I have known ‘Aunt Harriet’ during my whole lifetime. The boys of my time always regarded her as a sort of supernatural being; our youthful imaginations were fired by the tales we had heard of her adventures and we stood in great awe of her.”

Here and there in the run of speeches were musical selections. The Central [Presbyterian] church quartet sang “The Sands of Time Are Sinking” (listen to it here) and “Good Night, I’m Going Home.” Mrs. George Parker sang a solo, “Safe in the Arms of Jesus” (listen to it here). Finally, her body was loaded into a horse-drawn hearse and carried to Fort Hill Cemetery, where there was the graveside service depicted in the photo you see nearby.

–written and posted by Jim Duffy on Jan. 31, 2021 for Secrets of the Eastern Shore/Whimbrel Creations LLC. All rights reserved.