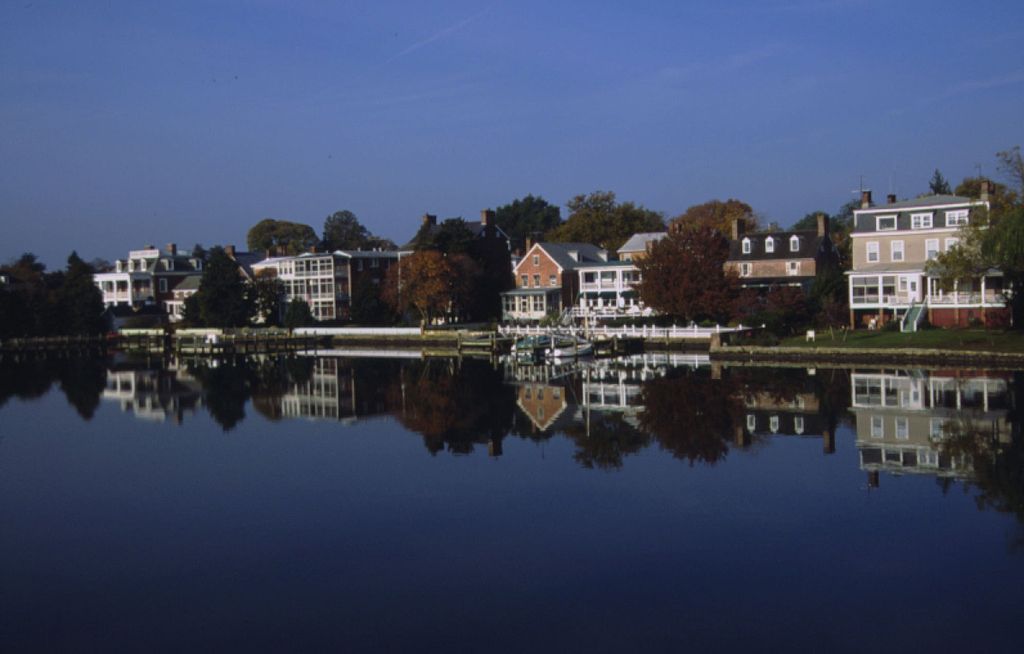 Chestertown, the Colonial King of the Eastern Shore

Chestertown sure knows how to make a swell first impression. As you cross the Chester River from the south on Church Hill Road, keep your eyes left to soak in a scene that seems to come straight out of the 1700s—a spectacular run of dripping-in-history brick homes rising up on the waterfront. Make that crossing at the right time of day, and you will have the bonus of seeing the reflections of those homes shimmering in the water below. That Chestertown is the most Colonial place on the Eastern Shore is no accident. The city was actually quite a big deal back in colonial times. The town was founded in 1706 and then got designated as one of just six Royal Ports of Entry in Maryland. It quickly grew into the colony’s second largest city, after Annapolis. And it sat square on a much-traveled highway for people headed to Philadelphia.

Today, Chestertown ranks second to Annapolis in a different statewide category—the number of still-standing buildings that were built before the American Revolution in 1776. Not surprisingly, both of Chestertown’s biggest annual civic events are big celebrations of Colonial times—more on those parties in a moment.

If you’re new to Chestertown, the first order of business is a stroll. I recommend parking in the upper reaches of downtown and then meandering your way back down to the waterfront. Many of the blocks here boast timeless red-brick sidewalks, which rise and fall in undulating fashion, thanks to the roots of towering shade trees.

The biggest bunch of historic buildings will be found by circling your way around Water, Queen, and High streets. At the foot of Water Street is the Custom House, a 1746 building where merchants registered their goods and paid their taxes. It also served for a while as the home of merchant Thomas Ringgold, who, ironically enough, was both a leader in the local Sons of Liberty and a big-time slave trader. Today, the building houses the Center for the Study of the American Experience at Washington College, which serves up a number of interesting lectures and talks that will appeal to history buffs. Next, find your way over to the foot of Cannon Street to savor a few moments of waterfront bliss at the itty-bitty Riverfront Garden. If you can manage to take your eyes off of the pretty Chester River for a moment, turn around and take note of the Hynson-Ringgold House at 106 South Water Street. The roster of historical celebrities who have spent the night there includes Benjamin Franklin, Sam Houston, and, well, yes, George Washington really did sleep here.

Next up in our stroll is a fascinating bit of African-American history at 206 South Queen Street. The Charles Sumner Post #25 building was erected in 1908 as a meeting hall for local veterans who served in the U.S. Colored Troops during the Civil War. It is believed to be the only building of its kind in Maryland—and one of only two in the country.

The hall was neglected almost to the point of ruin over the years, but over the past two decades local preservationists rallied their troops, saved it from demolition, and rehabbed it. In 2014, the Hall was reopened as a cultural center and museum.

From here, you have choices:

In addition to being the most Colonial of Shore towns, Chestertown is also the most collegiate. Washington College, a small liberal-arts school, is the 10th oldest college in the country. It’s so old that George himself donated 50 guineas to help the school get off the ground in 1782. He also gave the college permission to use his name. Play It Again Sam, a coffee shop that caters to the aging hipster crowd. Book lovers will also want to seek out The Book Plate, a first-rate used book store that carries a bit of everything but specializes in the history and culture of the Eastern Shore.

Chestertown is also thick with artists and art galleries these days. Stop in at Chestertown RiverArts (yup, that’s how they spell it) for a taste of the town’s artsy vibe. It’s at 315 High Street.

The Schooner Sultana needs to be on your must-see list. The work of master boat builder John Swain and a small army of volunteers, it is a meticulous re-creation of a 1768 British revenue cutter that now serves primarily as a floating classroom for school kids and teachers. Here is where to check on the public sails calendar. (Another option for getting out on the water is the Chester River Packet—a 65-foot 1920s-style yacht that maintains a regular schedule of public cruises.)

Tall ship lovers will want to put the end of October on the calendar. That’s the Chestertown Downrigging Weekend, when schooners from up and down the East Coast (and sometimes around the world) come to visit and the Sultana Foundation organizes a weekend-long bash with sailing, music, fireworks, lectures, tours, and more. Chestertown’s other big annual event, The Tea Party, is in May, usually on the weekend prior to Memorial Day weekend. It, too, draws giant throngs of people every year and takes the form of a giant downtown block party. The event is based on a bit of oral history, about how in May 1774 some Chestertown patriots boarded a British ship and threw a bunch of tea overboard in a show of support for their compatriots up in Boston. The highlight of the Tea Party festivities is a staged reenactment of that event, complete with patriotic speechifying, musket fire, and throwing overboard of a few nasty Redcoats in addition to the tea.

Here is one website where you can find out about Chestertown events and attractions, and here is another. The number to dial with questions is 410.778.0416.

And here in closing are a few other things that are located in the neighborhood of Chestertown and might be of interest. • Nearby Rock Hall is a big watermen’s town, and they also know how to honor their local heroes (as in the photo at right).

• The Eastern Neck National Wildlife Refuge is 20 miles away.

• The town of Centreville is nearby.

• That the flamboyant actress Tallulah Bankhead is buried outside of St. Paul’s Episcopal Church in the countryside outside of Chestertown will be a tidbit featured in my forthcoming book about Strange & Wondrous Things to See on the Shore. The church website puts the grave in the northeast corner of the “new” part of the cemetery–I will be out there looking for it some day soon.

• Down in the comments, reader Barb recommends the ice cream and fresh fruit at Lockbriar Farms, north of town at 10051 Worton Road. The place has her grandkids’ enthusiastic seal of approval …