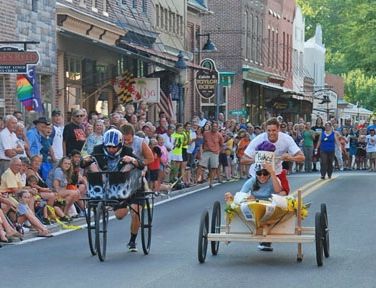 By Secrets of the Eastern ShoreSeptember 21, 2015January 5th, 2018No Comments

As old-time Main Streets go, Berlin is first-rate, blessed with a postcard-pretty streetscape, lots of interesting shops and adventurous restaurants, and a history chock full of fascinating characters.

Bonus: Berlin knows how to throw a party. My theory in such matters is that you can’t go wrong in a town that makes a big production out of its annual bathtub races. Here, they close down Main Street on a midsummer Saturday for the spectacle. Residents turn out in droves, standing five and six deep along the sidewalk to watch neighbors in crazy costumes go whizzing by in old tubs outfitted with makeshift wheels and axles.

Stunts like that are what helped Berlin snag the “Coolest Small Town in America” title from Budget Traveler magazine in 2014. Berlin has also been featured recently among the nation’s “Prettiest Small Towns.” The town’s name has nothing to do with the city in Germany. Actually, it evolved from “Burleigh Inn,” the name of a crossroads hotel that operated hereabouts in the early 1800s, before the town even existed in any official sense. Today’s Main Street was the busy Philadelphia Post Road back in colonial times. Before that, it was a path used for centuries by the Pocomoke and Assateague Indians.

Population-wise, modern-day Berlin is tiny, with just 4,500 souls. But the downtown has the feel of a bigger town. This is due in large part to Berlin’s proximity to a pair of humongous tourism draws, Ocean City and Assateague Island National Seashore. A few years back, I got to small talking with a Berlin merchant, and she told me that the key to her success was the regular waves of sunburnt tourists who decide to give Berlin a try when they need a break from the beach. The star of the streetscape here is the Atlantic Hotel, a Victorian inn built in 1895. Just one look at that sweet wraparound porch is enough to inspire a lot of visitors to march right in and make a reservation at the hotel restaurant. Strolling nearby streets, you will find lots more interesting old buildings—and a bunch of stately old trees to boot.

There is no mystery to the fact that a bunch of big-budget hotshots from Hollywood came to choose Berlin as the backdrop for “Runaway Bride,” the 1999 Julia Roberts hit. A lesser Hollywood effort, “Tuck Everlasting,” was filmed here too. On the shopping front, antiques and collectibles rule the day. A handful of interesting galleries give the town a modest little artsy vibe as well. Be sure to stop in and see the work of the talented young glassblower at Jeffrey Auxer Designs. If you arrange things in advance, you might even be able to take glass-blowing lessons with him. Try World of Toys, too—it has an idiosyncratic mix of old-school finds and newer educational games. The yarn shop A Little Bit Sheepish is another Berlin shop that gets rave reviews.

That Burleigh name from centuries gone by is making a comeback, thanks to a brewery called Burley Oak. They’re a local operation through and through, right down to the partnership they launched with a local farmer to figure out whether it would even be possible to grow local barley that could be malted.

You can get a taste of the answer by ordering up the pale ale called, simply enough, Local.

Just a few years ago, Berlin’s dining scene was a middling affair. Some solid old stalwarts from those days are still here—the white-tablecloth Drummer’s Cafe at the Atlantic Hotel, the But a slew of newcomers are on the scene nowadays as well. Chef Justine Zegna at Blacksmith Bar & Restaurant has an interesting background, having done stints as private chef for the likes of the Foo Fighters and Perry Farrell. She is big into farm-to-table cooking—and I am looking forward to giving her Eastern Shore Banh Mi a try—it adds some crispy local scrapple to the classic Vietnamese sandwich.

Leaky Pete’s Oyster Bar and Chop House is on the other end of downtown. Chef Terry Feehley and his wife, Robyn, are friends of mine who did a great job with an earlier incarnation of this restaurant in Cambridge, so it’s from first-hand experience that I say you can’t go wrong with the steaks and Eastern Shore comfort food Terry and Robyn are serving here in Berlin. Another recent arrival is the Baked Dessert Cafe. Open for breakfast and lunch only, they serve interesting and creative little quiches, salads, and sandwiches on top of the sweet title attractions. The owners know their way around publicity stunts, too—they talked the Berlin City Council into making up a proclamation declaring their Peach Dumpling to be the town’s “official dessert” and got scads of media play in the process.

Why peach dumpling? That would be because Berlin was built on the peach business. After moving here from Delaware in 1884, a guy named Orlando Harrison started up a peach orchard that soon became the largest operation of its kind in the whole country. Harrison Brothers employed nearly 500 people at its height. The company went downhill in the early 1960s, when a disease wiped out orchards all over the Shore and up in Delaware. Berlin’s story is chock full of such interesting little tidbits from days gone by. It’s the birthplace of Steven Decatur, a big 19th century naval hero. It’s also the birthplace of Linda Harrison, the actress who played the mute Nova opposite Charlton Heston in the original 1968 “Planet of the Apes.” (Her paternal great uncle? Orlando Harrison.) Before winning fame and fortune in Hollywood, Linda earned her share of local fame by being named queen of the 1962 Delmarva Chicken Festival.

Minister and composer Charles Albert Tindley was born in Berlin as well. The son of a slave, Tindley became a leading Methodist minister. The famed “Tindley Temple” in Philadelphia bears his name. He also became a composer who helped create the genre of gospel music as we know it today—his “I’ll Overcome Someday” later evolved into the civil rights anthem, “We Shall Overcome.”

You can get introduced to a good amount of this local history at the Calvin B. Taylor Museum on the outskirts of downtown.

Be sure to check the town calendar before your visit. On top of those Bathtub Races, there is a big Fiddler’s Convention, a fun Peach Festival, a popular New Year’s Eve ball drop, and much more. Last time I looked to see what was going on in Berlin, they were announcing a new “Hobby Horse Steeplechase” race at the annual Octoberfest celebration—just another sign that you’ve got to be able to throw some fun parties in order to win that “Coolest Small Town in America” title.

• So that you know what’s in the neighborhood, here is the Chamber of Commerce website, and here is the downtown-focused Berlin Main Street website.

• Here are websites for the Burley Oak Brewing Company, the glassblower Jeffrey Auxer, and the Calvin B. Taylor House Museum.

• Nearby, there is lots to do in Ocean City. Gorgeous Assateague Island National Seashore and its famed wild ponies are just a few miles away as well.

• Pocomoke River State Park is 25 miles away. There, you can explore remnants of the humongous old cypress swamp that used to stretch from here all the way up into Delaware.

• The Wild West theme park Frontierland is nearby. They recently added a high-ropes course and zip lines.

• The bathtub racing photo up top is from the Berlin Chamber. The Atlantic Hotel shot is from the hotel’s website. The photos of the horse and carriage, the vintage peaches sign, and the streetscape detail with old bicycle are all by Jill Jasuta Photography.