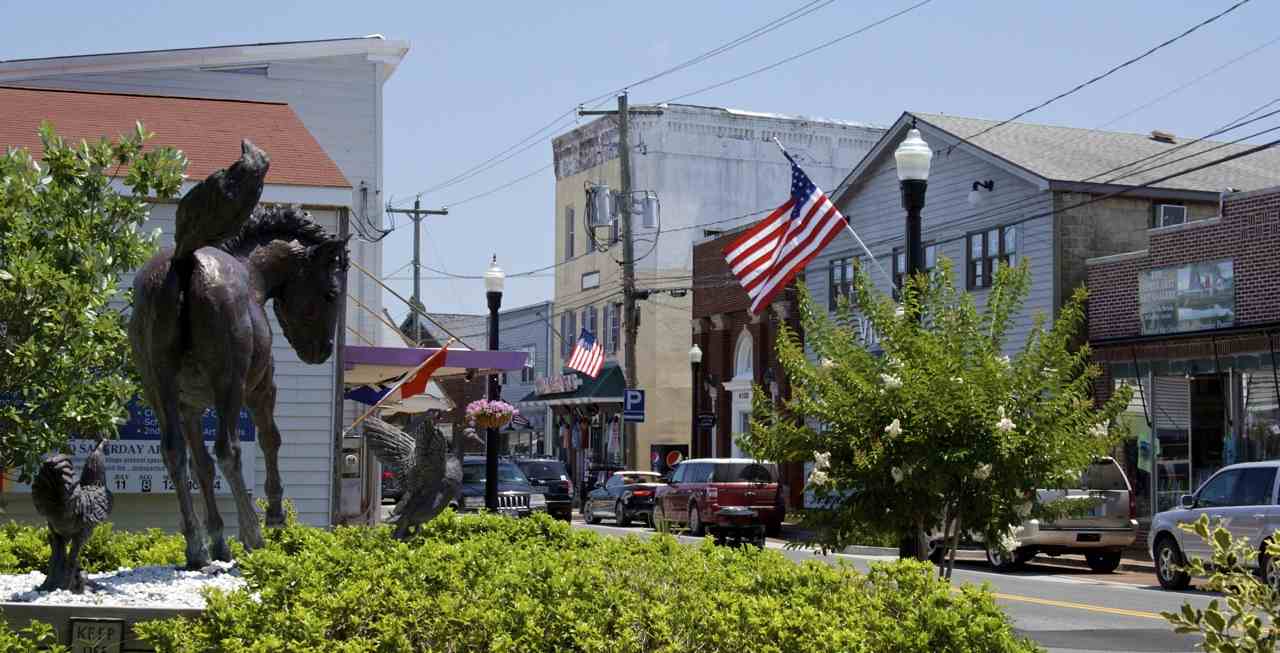 The Throwback Joys of Chincoteague and Its Famous Ponies

I write about lots and lots of different places on Facebook and for the Secrets website, so I’m speaking from long experience when I say that there is one town in particular on the Eastern Shore that generates the most passionate and enthusiastic response from people.

The winner, hands down, is Chincoteague, Virginia. 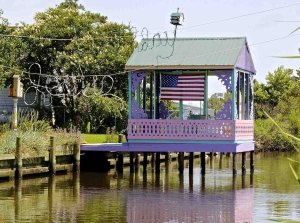 What is the secret to the town’s success in winning over so many hearts? I suspect that it’s largely a matter of time traveling. Chincoteague is located 50 miles from the biggest of the Shore’s beach resorts, Ocean City, but it has the feel of a place that is also located about 50 years in the past. This is one resort town that holds on tight to its old-school, small-town vibe. No wonder one national magazine recently dubbed Chincoteague  “America’s Happiest Seaside Town.”

Don’t misunderstand: You can find a vegan wrap in Chincoteague if that’s your thing, and you can grab some Vietnamese takeout if the urge strikes. But for the most part the dining scene here still belongs to the way-back-machine duo of ice cream parlors and seafood joints. Stroll into old classics like Bill’s Seafood or Muller’s Ice Cream, and you will feel like you’ve been transported back to a simpler time. 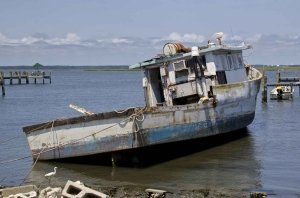 This isn’t restricted to the dining scene. The whole island is blessed with that magical quality of timelessness, from the causeway into town with its slew of old-school billboards to the quaint old downtown. Even on the busy, beach-bound Maddox Boulevard, the chintzy souvenir shops and mini-golf outfits tend to evoke memories of childhood vacations from the 1960s and ’70.

And I haven’t even mentioned Misty yet. There are millions of women (and quite a few men as well) around the country and the world who go weak at the knees at the mention of Chincoteague. As youngsters, they all loved the classic Misty of Chincoteague books by Marguerite Henry. They still have a soft spot for their old dreams of living in Chincoteague and owning a pony of their own. 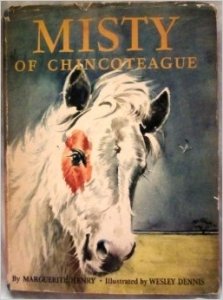 The Misty books were based on a real-life horse and a real-life family. After the real Misty died, she was stuffed, so you can visit her today at the Museum of Chincoteague on Maddox Boulevard. Her most famous foal, Stormy, is there as well.

Be sure to wander through the rest of the museum, too. You’ll see lots and lots of sweet old photos from days gone by, plus some great history about the filming of Hollywood’s take on “Misty” back in the 1960s. If you are lucky, the volunteer on front desk duty when you arrive will be a woman named Anna Rodgers. As you will see in the form of a life-size cardboard cutout while making your rounds, she was Miss Chincoteague, 1957.

Pony fans have quite a few other options in Chincoteague as well. The Chincoteague Pony Center has pony rides and pony shows in season. There are even daylong and weeklong pony camps where kids get to actually do chores and care for the animals. The Center also has a Memories of Misty Museum. 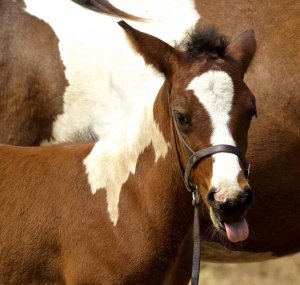 The wild ponies live just outside of town at Chincoteague National Wildlife Refuge, which is actually located on the Virginia end of Assateague Island. For casual visitors, most pony sightings here fall into the way-off-in-the-distance category, but there are also a dozen or so bus and boat tours that will probably get you much closer to the ponies and other wildlife. I’ve heard good things about Daisey’s Island Cruises with Captain Tom Carleton and Captain Dan’s Around the Island Tours.

But do be sure to set aside time to explore the refuge on your own. The wildlife “loop” is pretty as can be, and the sprawling oceanfront beach is a beauty as well. The last time my wife and I visited, we set the alarm and ventured out there in time for sunrise. 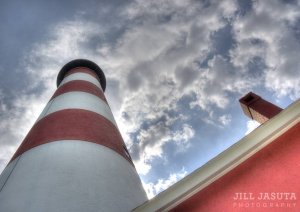 The 142-foot-tall Assateague Island Lighthouse is well worth a visit, too. Constructed in 1867, it’s adorned signature red-and-white stripes. As of this writing, you are allowed to climb up top on certain days between April and November, but it’s best to call ahead and check on those hours. If you are hiking or biking, I recommend taking the Woodland Trail to the Bivalve Trail, which ends in some sweet waterfront scenery.

The aforementioned Museum of Chincoteague is out just across the bridge that connects the wildlife refuge and the island. Keep your eye out here along Maddox Boulevard for Island Creamery as well. It was recently named by TripAdvisor as the best ice cream parlor in the whole country. Be warned: Come vacation season, the line there often stretches out the door and down the sidewalk. 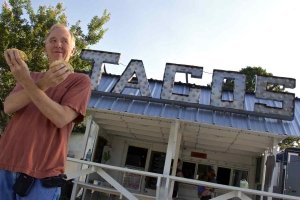 I have two more recommendations on Maddox Boulevard, both of them involving al fresco dining. First up is Woody’s Beach BBQ, which is a genuine slice of parrot-head paradise. Second is Pico Tacqueria, where they really take their motto—“you can put anything on a taco—to heart. The last taco I had there had some grapefruit in it, and it was scrumptious.

Chincoteague’s old downtown has been making a bit of a comeback of late. You’ll find a mix of art galleries and small boutiques mixing it up with a lot of old bait and tackle shops and antiques emporiums. The waterfront walkway and parks there were in the midst of being spruced up and expanded during the summer of 2015. Be sure to pose for a picture with the oversized “Love Chairs.”

At the old-school Island Theatre, you’ll find Misty’s hoof prints in the cement out front. Misty was here to mug for the cameras when that Hollywood movie premiered here back in 1961. They filmed that whole picture here in town—at one point all the kids in Chincoteague got to take days off of school and spend them enjoying free carnival rides. The aforementioned Muller’s Ice Cream shop is a couple blocks from the theater, at Cropper Street.

The carnival grounds are on Main Street, too, south of downtown. For nearly a century now, the local fire company has been putting on an old-school carnival there on Fridays and Saturdays in June and July.

The Timothy Hill House is on the other side of Main Street, to the north. The oldest house on Chincoteague Island, it’s a tiny little affair with lots of big stories to tell about life here on the island over the centuries. Volunteer tour guides staff the house once a week or so in the warmer months—that’s the best time to go. (A link to the piece I wrote about the Hill House is below in the resources.)

Chincoteague runs a pair of popular annual food festivals—a seafood fest in May and an oyster fest in October. But the biggest event in town by far is the Annual Pony Swim & Auction, in late July. It draws about a gazillion people eager to watch as the famed Chincoteague ponies swim a small stretch of water and then get herded through town to the auction grounds.

• The Chincoteague Chamber of Commerce website and event calendar is here. Tourism information for the Eastern Shore of Virginia is here.

• I wrote longer pieces for the website about the Timothy Hill House and about the history of the annual Pony Swim. This historical piece on the Ash Wednesday Storm of 1962 and its connection to the story of Misty and her foal Stormy has proven to be the single most popular page on the Secrets website. Finally, there are more details about the Chincoteague Museum in this daytrip about visiting three museums on the Eastern Shore of Virginia.

• If you feel inclined to find your way to 3376 Ridge Road, you will see a giant fiberglass statue of a Viking standing, well, in the middle of nowhere. I do not yet know the back story about this, but I plan to seek it out someday.

• The nearby NASA’s Wallop’s Island Flight Facility has an interesting little visitor center and frequent family-oriented events on science and astronomy topics. Here is the facility’s website, and here is its Facebook page.

• Except for the Misty book cover, all of the photos here are by Jill Jasuta Photography. Over in the Shore Store, there is a great shot by Jill of the interior of the Assateague Lighthouse that is available in a greeting card format.