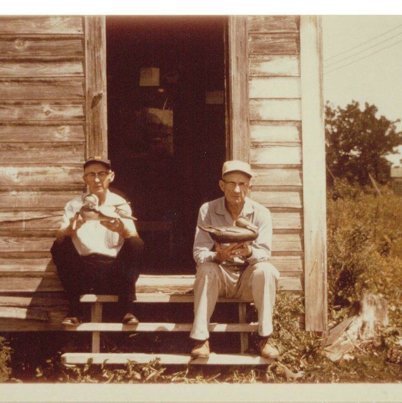 “Two dumb country boys.” That’s how Lem Ward liked to describe himself and his brother, Steve. They were born in the last years of the 19th century and lived in Crisfield. Both were barbers by trade, just like their father. They shared a shop, in fact. And for fun, they sang in a little barbershop quartet. Darn if those two dumb country boys didn’t end up with a fancy schmancy museum named in their honor. It’s a pretty cool story, and the Ward Museum in Salisbury tells it very well.

In 1920, the two brothers started up a side business. During slow stretches in the barbershop, they would carve duck decoys and sell them to local hunters. The Ward Brothers did pretty well with their carving hobby for a couple of decades, but then cheaper, mass-produced plastic decoys started taking over the market in the 1950s.

The Wards responded to that turn of events by going into creative overdrive. In doing so, they helped to transform an increasingly obsolete old hunting tradition into a true and original American art form.

The museum, which stands on 4.5 acres next to picture-pretty Schumaker Pond, has the largest collection of wildfowl art in the world. It tells the story of the Ward brothers in an exhibit that re-creates the old workshop where Lem and Steve did their carving. There are three other permanent exhibits at the museum, including one that unfolds in a re-created wetland scene and explores the evolution of carving art over time, and another that showcases the different styles of decoy carving across North America. Pretty much all of the top carvers are represented here.

The biggest weekend of the year at the museum is in late April, when it hosts the Ward World Championship Wildfowl Carving Competition and Art Festival, with $60,000 in prize money up for grabs. Many winners from past years are on display year-round in the museum’s World Championship Gallery.

If you’ve got 15 minutes to spare, here is a well done short film about the Ward Brothers that was put together in a partnership between the Crisfield Heritage Foundation and the Ward Museum.

EVENT HEAD’S UP: The 2015 edition of the Ward World Championship Wildfowl Carving Competition and Art Festival will be held April 24, 25, and 26 at the convention center in Ocean City. Here are more details.

Before or after a visit to the museum, make the short drive over to gorgeous City Park to while away a couple of hours. Upon first sight of the park, you may find yourself wondering how this giant depression in the landscape came to be. Back in the 1800s, this was actually Humphrey’s Lake. But the lake drained away after a dam failed on May 29, 1909. In 1925, the city of Salisbury bought the bottom of the old lake for $5,000. They transformed it into parkland in the early 1930s. Here is a story in which a seventysomething Salisbury native reminisces about her lifetime’s supply of fun memories about City Park.

A walking trail circumnavigates the park. Along the way are the requisite playgrounds and picnic areas. A stream popular with ducks and herons winds through the park. The Salisbury Zoo is right in the middle of the park, and I suspect you’ll be pleasantly surprised by what a nice job they do–the signature display involves a flock of pink flamingos. You can’t beat the price–admission is whatever you feel inclined to drop in the donation box.

Perdue Chicken is based in Salisbury, and the reason why I mention that in the context of City Park is that the park was the setting of the very first Frank Perdue it-takes-a-tough-man-to-make-a-tender-chicken television commercial. Watch it here. No, really: Watch it–it will make you smile.

Last not least: Here is a map that shows where City Park is located.

• The minor-league Delmarva Shorebirds play at Perdue Stadium. They have an interesting little Eastern Shore Baseball Hall of Fame museum in the stadium that’s open either before games or by appointment.

• Entertainment at the nearby Wicomico Youth & Civic Center ranges from rodeos and monster trucks to concerts and touring Broadway shows.

• Salisbury University has a number of art galleries and a busy calendar of cultural events.

• Here is a guide to dining, shopping, and events in Downtown Salisbury.

NOTES: The Ward brothers photo is on display at the Tawes Museum in Crisfield. The flamingo shot from the zoo is by Jill Jasuta. The museum exterior is by me, Jim Duffy.