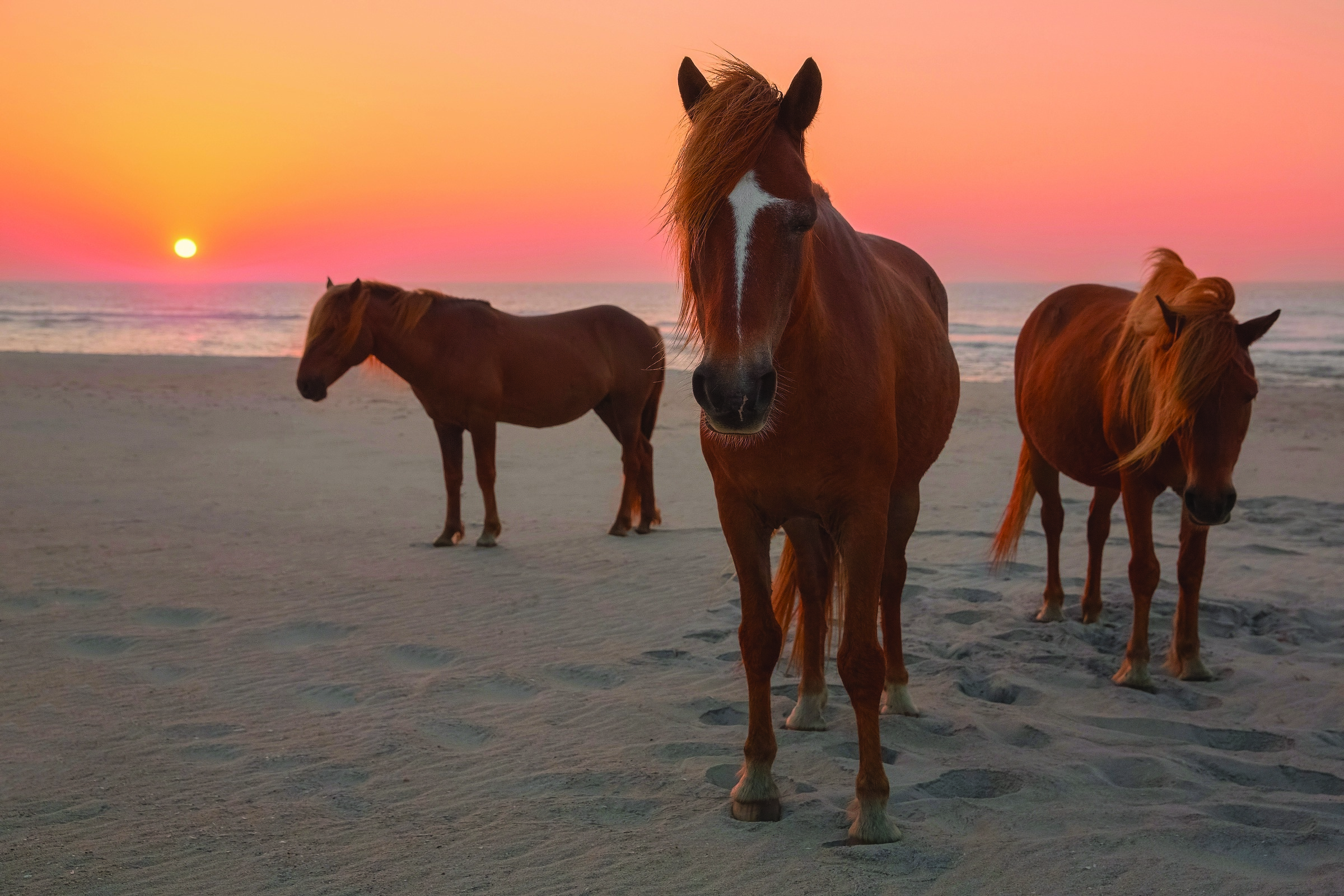 This gorgeous barrier island lies on the Atlantic coast right where Maryland meets Virginia. It’s the kind of place where in the course of your wanderings you are quite likely at some point to take a look at your camera and say something like, “Geez, did I really just take my 374th picture of a horse?”

The diminutive ponies that the 37-mile-long Assateague is famous for really are that compelling a sight. Nobody knows for sure how they got here. There is one legend about a herd swimming ashore from the distant wreck of a Spanish galleon. There is another about Blackbeard the Pirate delivering horses to the island home where one of his dozen wives lived. Then there is the more mundane likelihood that regular old European settlers brought the ponies to the island and for some reason lost in the mists of time the animals were allowed to become wild. The ponies now roam freely along beaches and roadways, chomping up grasses all day long and generally looking as adorable as all get out. I say generally because there was one not-so-adorable pony a few years back who marched up to my parked car and commenced trying to stick his head in the driver’s side window. A word of caution, then: Cute though they may be, these are wild animals.

Scenery-wise, the island is a natural wonder of the first order, graced with breathtaking beaches that stretch on for mile after mile on one side and spectacular bays and marshes on the other. Whether you prefer walking, cycling, or paddling won’t matter a whit—Assateague is a perfect destination in every category.

There’s some interesting history tied up in the place. For one thing, the island used to be a whole lot longer than it is now, stretching all the way up beyond Ocean City and linking up with what is now Fenwick Island in Delaware. Then came August 23, 1933. That’s when the fearsome Chesapeake and Potomac Hurricane cut a humongous hole in the middle of the island, right at Ocean City. If nature had her way, the island might well have managed to reconstitute itself over time, but the people of Ocean City kinda liked the idea of having a big hole in the island. They soon got to work building a system of artificial jetties to make sure that the new Ocean City Inlet was here to stay.

The town made out great in the deal. Sands that would have reconstituted Assateague Island instead landed on the city’s beaches, which grew wider and more tourist friendly. Plus, the inlet made ocean access a breeze for boaters and helped Ocean City become known as a truly premier fishing destination.

The island didn’t make out quite as well. The inlet project aggravated erosion issues that are affecting Assateague to this day.

A brief pause here to be of service to those who want more about the 1933 storm.

OK, back to our story. The next dramatic turn in the life of Assateague Island came in the 1950s, when some developers concocted a plan to turn the island into a resort town. The way I understand it, these weren’t some stereotypical greedy real estate moguls. They were closer to dreamy do-gooders, and they were determined to create an oceanfront resort town that would be affordable for blue-collar, working-class people and not another playground for the wealthy. Eventually, they built a 15-mile-long road, Baltimore Boulevard, right down the middle of the island. They cleared a bunch of other land so they could add in scores of connecting streets. When the construction of a bridge from the mainland began in 1961, the development was actually poised to be a big success.

Then came March 6, 1962—and the Ash Wednesday Storm, a three-day torrent of wind, rain, and floodwaters that pretty much destroyed everything the developers had done up to that point.

Three years later, Congress passed legislation creating the Assateague Island National Seashore that now covers most of the island. Other, smaller sections are part of Assateague State Park in Maryland and the Chincoteague National Wildlife Refuge in Virginia.

Another brief pause for those who want more:

In planning a visit to Assateague, you really don’t need some big agenda full of bullet points. The place is better suited to just whiling away the hours by strolling the beach, ogling the bay, and snapping pony pics. But just so you know, here are a few specific sites you may or may not want to put on a hit list.

• The visitors’ center located just over the bridge on Maryland’s mainland is reasonably well done, with exhibits, an introductory film, and a small gift shop.

• The postcard-pretty Assateague Lighthouse, which dates to 1867, is located in Chincoteague National Wildlife Refuge and accessible only from the Virginia side. The interior is open and available for 142 feet of stair climbing from April through November.

• In Assateague Island State Park, there is the Rackliffe House, an 18th century coastal plantation. It is open May through October.

• On Assateague Island National Seashore, you can still see the crumbling remains of Baltimore Boulevard. Nature has reclaimed all of the other evidence of that 1950s development, however.

• By the way, beach camping is a very big thing on Assateague.

One last tidbit: Assateague was the name of a Native American tribe that lived along this stretch of the Atlantic Coast. I have seen the word translated roughly as “a stream running between.” The tribe had a fascinating burial custom called “excarnation.” They would remove the skin from a dead body and scrape the bones clear of all flesh. The bones were then carefully placed on shelves in structures made of logs. Here is the Wikipedia entry on the tribe.

Just so you have it in one place, here are the website links and phone numbers for all three pieces of Assateague bureaucracy:

And finally, here is what else is in the neighborhood in the event you want to extend your stay in the area and take in some other cool stuff:

• NASA’s Wallops Island Space Flight Facility has a nifty little museum and does family-friendly presentations most every weekend.

• Beautiful Berlin is nearby. It’s where “Runaway Bride” was filmed, and it’s got one of the Shore’s most beautiful old downtowns.

• There’s lots to do in Chincoteague.

• There’s lots to do in Ocean City.