I was looking up something else in the February 23, 1918 edition of the Denton (Md.) Journal when I got distracted by the wonderful little essay below. It’s about the many roles that general stores and their shopkeepers filled in the communities of Delmarva around that time. There was no headline on the piece. Nor was there a byline. Old newspapers can be weird like that.

The whole thing is below. I included more photos than usual, so keep scrolling down after the essay ends.

A country store is always a place of interest. … Seen so often on the Peninsula by the tourist, [these old-fashioned places of business still refuse to] extend recognition to the automobile. [Unlike] some of the new-fangled places in the plate-glass part of the community, the country store will not handle or advertise gasoline until it has sunk into decline or “changed hands.”

Instead, it announces its ability to supply its patrons with all kinds of feed, and flaunts a pump, watering trough, and bitchin’ pole in the very faces of motor tourists, the pole being invariably initialed in places by the visiting farmers’ boys and gnawed in other places by their saddle horses. There are, of course, a porch and wooden awning, and from the Iatter swings the sign. “General Store.” A railing along the porch, on either side of the steps is intended for the resting of one foot and then the other of the farmer come to “trade,” while he whittles and talks crop prospects with a neighbor. Such railings are made of carefully selected soft pine, are used up by the whittlers two or three times a year, and as regularly are renewed by the storekeeper, for they help to keep some of his customers occupied on the outside while he waits upon others on the inside.

The general storekeeper … must be a rapid thinker, a fluent talker, a man of inexhaustible good nature. As general storekeeper he is, ex-officio, postmaster, squire, insurance agent, mortgage banker, legal adviser, road commissioner and collector, and disseminator of local news; and, while he is measuring molasses, he is either telling what Jed Hankin’s son said on a postal card received for his father that morning, or recounting the latest news from the western front.

In a purely commercial way, his range of activity is from the cracker box to the egg crate, or to the dress goods counter, to the money order window, to the “gents’ furnishin’” shelves, to the apple barrel, to the letter delivery window, to the flour bin, to the novelty counter, to the postage stamp drawer, to the hardware department, back and forth between all of them, “settin’” things before this customer and before that, taking their orders when they are ready for him, wrapping up. tying up, and keeping up a running conversation with persons on one side of the store while carrying on a discussion on political, social, or economic questions with the barrel sitters or round-the-stove sitters on another side, or down the middle.

The general stone has never been put in order. Its merchandise is as mixed as it is miscellaneous. Fifty percent of its patrons find what they want themselves, and pay for it as they go out, or tell the storekeeper to “put it down” [on credit]. Almost as great a proportion scarcely think of asking for their mail, but go behind the ground-glass partition and take what is theirs. 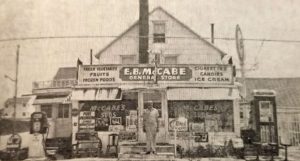 The general store patrons know one another’s business; they have long since seen the futility of trying to keep their private affairs secret, and, if there is anything going on within a radius of ten miles which the general storekeeper has not heard of, his delinquency becomes a topic of conversation and a subject of criticism along the whole countryside.

–posted by Jim Duffy for Secrets of the Eastern Shore/Whimbrel Creations LLC on March 1, 2021

As promised, more photos below. The one up top here is of the Hilyard Store in Georgetown, Delaware, circa 1885. 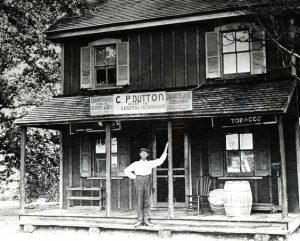 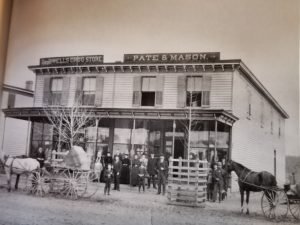 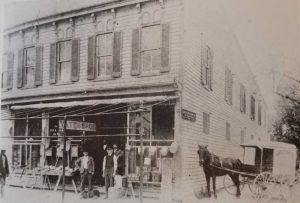 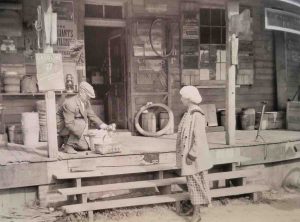