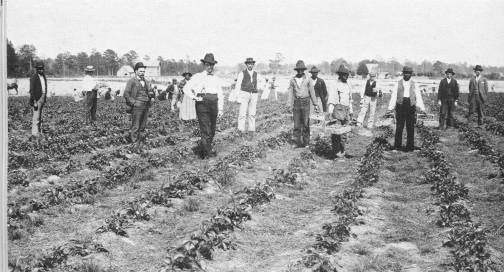 DELMARVA CLASSIC: The Sweet Strawberry Boom of Days Gone By

The story behind the variety of strawberries we enjoy nowadays is a global affair that stretches across several centuries and three continents. Strawberries were a modest little culinary thing in Europe as far back as ancient Rome–there is talk in writings dating to those days about how wild strawberry bushes had medicinal properties.

But farmed strawberries were another matter. The first mention of strawberry bushes being a part of formal European gardens dates to the late 1300s in France. But those strawberries weren’t the ones we know today. They were much smaller and much less colorful. Less tasty, too.

Strawberries were abundant in the Americas, too, though this was a different variety of the species. Lots of Indian tribes gathered wild strawberries as part of their culinary traditions. Early European settlers adopted that practice, too. Those settlers weren’t interested early on in farming strawberries, as wild bushes were so plentiful.

For the most part, these New World strawberries were also smaller and colorless. But there was one notable exception on the size front. In 1712, the French military engineer Amedée François Frézier arrived in South America. While posing as a merchant–he was actually on a secret mission to gather military intelligence–he took note of the strawberries on display at markets in the area we now know as Chile. They were so blandly colored as to be kinda white, but he marveled over how they were “as big as a walnut, and sometimes as a Hen’s egg.” He brought a few bushes back to France.

Can you tell a boy strawberry from a girl strawberry? Me neither. The French farmers who started playing around with Frezier’s strawberries were in the same boat. They were able to grow bushes, but no fruits ever appeared. They didn’t understand yet the workings of so-called “dioecious” plants. Each bush is either a boy or a girl. Both sexes can reproduce on their own as bushes, but berries will appear on girl bushes only if some boy bushes are nearby and up to romantic snuff.

Call it Frezier’s folly: He brought only fruit-bearing girls back to France, assuming that the fruitless boy bushes were boring and useless.

The solution to this mystery of the missing berries arose by accident. Other French farmers had gotten interested in another type of new world strawberries, these from  Virginia. The fruits on these bushes were tiny little things, but what made them attractive was a mix of rich flavor and luscious red color. Some folks back then referred to these Virginia plants as the “scarlet strawberry.”

One of these farmers was playing both sides of the strawberry frontier. Without having any idea what he was doing, he planted some Virginia strawberry bushes in relatively close proximity to Chilean strawberries. Those Virginia boys sensed that romance was in the air in the French countryside. The result was magicall–big, red, and flavorful.

A new breed was born: Fragaria x ananassa. In time, this breed would become the strawberry of choice throughout much of the world. It doesn’t matter where your modern-day strawberry was grown–pretty much every strawberry in our stores and markets has lodged deep in its DNA a centuries-old smidgeon of those randy Virginia boys. 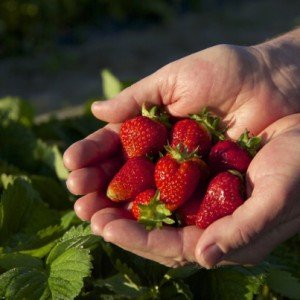 At first, strawberries ranked primarily as a delicacy for the rich. They were served with cream at fancy-schmancy “strawberry parties” where the champagne flowed freely. A pair of 19th-century British tourists wrote home about their experiences at these soirees held on elaborate estates in Maryland. The first report came from Godrey Vigne in 1831:

[The estates of the wealthy] are admirably adapted for a fete champetre, or a strawberry party, as it is called. … I had the honour of an invitation to the only one that was given during my stay in that city. The company assembled about six o’clock. Quadrilles and waltzes were kept up with great spirit, first on the lawn, and then in the house till about eleven. In the meantime strawberries and cream, ices, pine apples, and champagne, were served up in the greatest profusion.

The weirdest part of these fete champetre involved fireflies. Perhaps that detail will be of interest to those of you wondering about hair-style choices for upcoming spring galas.

[Here is where] I first saw the fire-fly. They begin to appear about sunset, after which they are sparkling in all directions. In some places, ladies will wear them in their hair, and the effect is … very brilliant.

The second report came from the following year, 1832, from Charles Latrobe.

A few hours before sunset, the … visitors … assembled, by far the greater number consisting of the young and unmarried of both sexes. Under the shade of the trees, tables were covered with the delicacies of the season—among which the delicious fruit, from which these Strawberry Parties took their name, was … seen in the greatest profusion, with its appropriate concomitants of cream and champagne. Many an enchanting spectacle of natural beauty and human contentment and pleasure have I observed spread before me while sitting in the portico of one of these rural retreats as the sun sunk slowly to its setting. …

Later comes the brief but beautiful twilight, with the wailing cry of the whip-poor-will, the flight of the night-hawk, and above all, myriads of fire-flies filling the air with sparks, dancing in the deep shade, or streaming with their intermittent and gentle light among the groups, as they stroll in the open air, or sit in the porticoes.

What transformed the strawberry from an extravagance for rich folks into a mass-market phenomenon was the railroad. Trains started rolling into Somerset County, Md. just as the Civil War ended, in 1866. A local businessman named John C. Horsey helped pay for the construction of one county railroad station, and the town that grew up around that station took its name from his daughter, Marion. 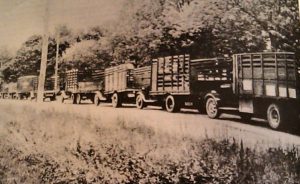 It’s hard to imagine nowadays just what that railroad line accomplished for Marion Station. To our modern eyes, the place has long had the look of a ghost town, with its downtown characterized by a charming-but-ramshackle emptiness and the stories of its glory days lost in the mists of time. The oyster boom that would famously fuel the growth of nearby Crisfield was in its infancy then. Thanks to the strawberry boom, Marion Station was actually the bigger of the two towns for a while—and it, too, had a maritime economy, with steamships sailing right up then-deep-water Coulbourn’s Creek and into town.

But it was the railroad that really fueled the growth of Marion Station. Hundreds of rail cars packed with ice rolled into town every day during harvest season. The line of berry wagons waiting for a turn at the auction stand often stretched for miles. Buyers came from as far away as Pittsburgh and Chicago. Immigrants came down from big cities in droves to work the fields.

In those glory days, downtown Marion Station had a dozen stores, a movie theater, a couple of factories, a shipyard—and even a hospital, the first one ever built in Somerset County. (Scroll down to the bottom of this page when you’re done reading for some cool photos from strawberry days gone by.)

Marion Station was just one example of what the strawberry boom did for Delmarva towns. Marion laid claim to the title of “Strawberry Capital of the World,” but it had lots of competition. I have seen variations of that same phrase used to describe the old days in the Maryland towns of Pittsville and Ridgely as well as the Delaware burgs of Selbyville and Bridgeville. In 1899, Sussex County, Delaware sent more strawberries to market than any county in the country—an astounding 7 million quarts.

The Boom Winds Down 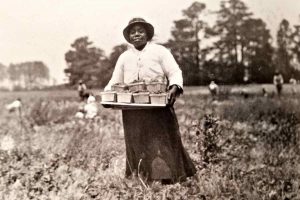 Worker in a strawberry field on the Eastern Shore of Virginia

What killed the strawberry boom was the one-two punch of greed and mismanagement. Farmers bet everything on their strawberries, expanding into new fields and clearing out forest and animal pastures to create even more new fields. They overdid it in the end, wearing out the land and failing to plan for a fallback crop if and when things went bad. Their problems were exacerbated by a complex supply chain system that routed their sales through a gauntlet of multiple brokers, limiting their profits and helping to fuel the cycle of over-farming.

Things were already going south by the time the Depression hit. The years that followed brought new transportation advances–think trucks, highways, modern refrigeration, and even airplanes. What that meant was that cheaper strawberries from Florida and California, where growing seasons were longer, could enter the market as well.

Still, modern-day Somerset County remains proud of its strawberry story. For a long time, the community held a big Strawberry Festival, though I don’t think it’s happening in the year I’m updating this post (2022). The Ridgely Strawberry Festival is a go, however–that event will be on the Saturday of Memorial Day weekend, May 28. And a church in St. Michaels, Md. is having a strawberry festival on Sat., June 4, 2022. If there is a strawberry festival going on in your town, please feel free to spread the word by putting a link to event details in the comments below.

—Written by Jim Duffy for Whimbrel Creations/Secrets of the Eastern Shore in 2017. Updated with new content added first in May 2018 and then again in April 2022. All rights reserved.

• The photo up top here shows men working in a strawberry field in Fairmount in Somerset County back in 1897. The photo of the modern-day strawberries is by Jill Jasuta Photography.

• A fuller rendition of the adventures of that French military spy can be found here at Atlas Obsura.

• A little more detail on those ritzy strawberry parties  can be found here at the Food History Blog. FOODHISTORYBLOG: http://researchingfoodhistory.blogspot.com/2019/06/19th-century-strawberry-parties.html

• And here are the photos I promised: 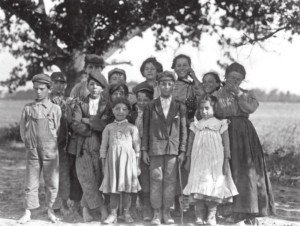 Italian immigrants from New Jersey in 1910 who came down to pick berries on Giles Farm in Seaford, DE. 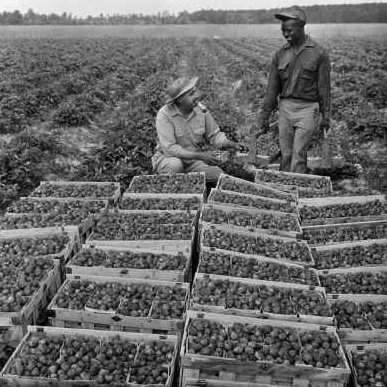 A strawberry field in Marion Station in Somerset County back in the day. 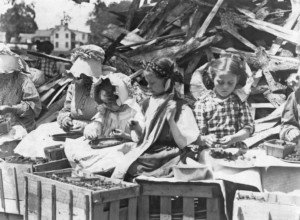 Strawberry farming in 1896 at the J.R. Roose farm near Milford, DE