Many folks think of the Choptank River Lighthouse in Cambridge, Md. as a newish thing, and, in a way, they’re right about that. The replica was constructed seven short years ago, but the stories that beacon is built on go clear back to before the Civil War—in fact, you might say that this seven-year-old lighthouse is celebrating its 161st birthday this year.

In the photo below here, the one at left is the old Cherrystone Bar Lighthouse. The photo is from the early 1900s, but that beacon was built in 1858. In her first life, the lighthouse stood just off of the harbor at Cape Charles, Va. Confederate forces extinguished her light in the early months of the Civil War, but Union troops regained control in 1862 and fired her back up.

Cherrystone Bar lit the way into Cape Charles until 1919. I have not come across much information outside of the basics—names, dates of service, etc.—about the men who served there, except for this sad note: Keeper Oliver R. Hudgins died in 1903 from blood poisoning which was caused by a crab bite on his hand. He was just 42 years old.

A technological breakthrough left Cherrystone Bar in the dark, ending its first life. After some improvements were made to the harbor at Cape Charles in 1916, experts with the Coast Guard decided to install an automatic light fueled by acetylene gas and mounted on a black skeleton tower. An automated fog bell was part of the deal.

I have seen a couple of claims out there that this was the first automated light in the region—and perhaps the country—but I’ve been unable to confirm that one way or the other. In October 1919, the 4th order Fresnel lens was removed from Cherrystone Bar and transferred to the Solomons Lump Lighthouse on the western shore of Maryland. (This story continues below the photo.)

Back in Cape Charles, the lighthouse cottage was loaded up on a barge and moved into storage on land. She didn’t stay there very long. In the spring of 1921, the lighthouse was put on another barge and towed up the bay to the site of the old Choptank River Lighthouse in Maryland—the beacon there had just been destroyed by ice.

And so Cherrystone Bar stepped into its second life with a new name: The Choptank River Lighthouse. It stood near the mouth of the Tred Avon River (which leads into Oxford) for 43 years. As far as I can tell, it’s the only lighthouse ever to be moved in whole like that to a new state and serve once more as a navigational aid. The middle photo in the array here is from this second life.

Technology eventually caught up with the beacon here, too. An automated light went into service on the Choptank in early 1960s. The lighthouse was dismantled in 1964, seemingly passing into the annals of history at the ripe old age of 106.

Or not: Starting in the 1980s, some civic do-gooders in Cambridge came up with the idea of rebuilding the Choptank River Lighthouse as a way to celebrate the town’s rich maritime heritage. Various groups of people chased that vision for three decades before the project became a reality. The replica that went up on the waterfront in Cambridge in 2012 is designed based on the plans for the old Cherrystone Bar Lighthouse in Cape Charles.

The beacon is thriving here in its third life, as you can see in the photo at right. It’s no longer a functional navigation beacon, but it’s become a powerful waterfront icon for the revitalization that has taken hold in Cambridge in recent years. The small museum inside has been setting new visitation records every year.

The Choptank River Lighthouse is open daily for self-guided tours between May and October. In the year I’m writing this, 2019, it’s staying open through November, too, as part of a broader Water/Ways civic endeavor.

Here is the Facebook page of the Choptank River Lighthouse. And here is the website for the beacon. And here are two photos of the Lighthouse by Jill Jasuta Photography that are available over in The Shore Store at this website. Click on either photo to see it bigger over on that store page. 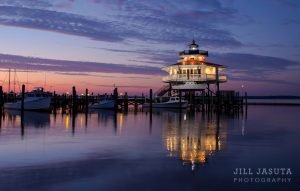 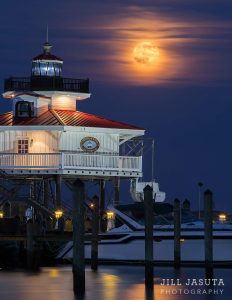