Chincoteague Character of the Day: Thomas Downing, the ‘Oyster King’ of NYC

By Secrets of the Eastern ShoreFebruary 9, 2019August 3rd, 2019No Comments

Growing up in Chincoteague, Va. in the 1790s and the first decade of the 1800s, Thomas Downing spent much of his time fishing, oystering, digging up clams, and catching terrapins. He must have spent a good bit of time around the kitchen as well, considering the way he grew up to become one of the most famous restaurateurs in New York City—the “Oyster King of New York,” in fact. 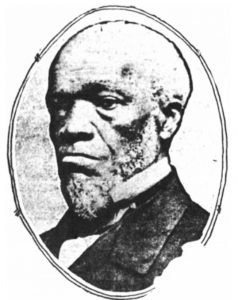 In one respect, Thomas was luckier than most blacks on Virginia’s Eastern Shore: He was born a free man, thanks to a then-newfangled faith called Methodism. Thomas’s parents were enslaved up until an itinerant preacher (whose name seems to be lost in the mists of history) showed up at some point in the 1780s and filled their owner with such “religious fervor” that he freed his slaves.

In those early days, Methodists were vehemently opposed to slavery—in fact, members who failed to free their slaves within one year of conversion could be expelled from the church. The slave owner in this case, Captain William Downing, may well have been the first person on Virginia’s Eastern Shore to convert to Methodism. That’s his name today on the historic Downing United Methodist Church in the town of Oak Hall. That’s his name, too, that pops up time and again in journals of the famous Rev. Francis Asbury, who visited Capt. Downing’s home on numerous occasions.

Back to Thomas Downing: The reason why Thomas left Virginia and headed north at age 21 is hard to nail down for certain. The most sensational version of the tale is a bit of oral history that has the white Downing family trying to reclaim ownership of “their” slaves after the captain’s death, a move that supposedly led to violence between the black Downings and white Downings.

But the timing doesn’t work—the white Captain Downing lived into the 1820s, while Thomas moved out of Virginia in 1813. Still, it’s possible some kernel of truth lurks around that oral history. Over time, Methodist beliefs “evolved” on the question of slavery—and not for the better. Some 15 years after he freed Thomas Downing’s parents, Capt. Downing appears in state records logging the purchase of a slave. Did that reversal or some bit of conversation around it spark fears among the black Downings that they were at risk of being re-enslaved? There is no way to be sure.

Finding His Way to the Oyster Business

What we do know is that Thomas landed in Philadelphia and spent six or so years there toiling away in obscurity. He moved to New York City in 1821 and immediately started selling oysters out of his home on Pell Street. But he was just dipping a toe in those waters at that point, as he also advertised himself offering other services, as a “White-Washer, Water-Colourer, and House-Cleaner.” He finally went all in on oysters in 1830, opening up a “refectory” in the shadow of the New York Stock Exchange at 5 Broad Street.

Downing’s son, George, used a wonderful phrase to describe his father–as a “man who knew not tire.” And indeed, Thomas Downing went after his new endeavor in indefatigable fashion. He would wake at 2am and row himself across the North Hudson River over to the Jersey Flats, where he would tong for the oysters that he would then bring ashore and serve to customers all day long. The business took off. Downing soon expanded his operation into two adjacent buildings at 3 and 7 Broad Street.

Oysters were a huge deal in New York City back then, with an estimated $6 million in annual sales by street vendors and in so-called “oyster cellars” that dotted the city’s streets. Most of those latter operations really were located below street level—you had to step down to enter them. They tended to be dark, cheap, and crowded. Fisticuffs were commonplace. Women steered clear of such joints, as did rich men who regarded themselves too refined to hang out with ruffians in the cellar.

Thomas Downing’s entrepreneurial genius involved going upscale. He did for oysters in New York in the mid-1800s what Starbuck’s did with coffee shops in our times. Where the menu at most other oyster cellars consisted in its entirety of raw, fried, and stewed bivalves, Downing’s Oyster House offered “scalloped oysters, oyster pie, fish with oyster sauce and an unusual specialty, poached turkey stuffed with oysters.” The decor at Downing’s was “the very model of comfort and prosperity, with it mirrored arcades, damask curtains, fine carpet and a chandelier.”

Rich white guys felt just fine about bringing their wives and daughters to Downing’s place. And they came in droves—the merchants, the bankers, the Wall Street traders, the politicians, and more. Downing’s Oyster House gets mentioned quite often in journals of the rich and famous from those days. Interestingly, most of those journal entries don’t even mention the color of Downing’s skin.

Downing’s most famous catering gig came when Mayor Philip Hone threw the “greatest affair of modern times” to introduce the famous British writer Charles Dickens and his wife to the elite of New York society. Downing earned an eye-popping $2,200 that night, serving oysters to 2,500 guests.

Once he hit it big, Downing no longer had time to do his own tonging. But he worked as hard as ever, showing up at the oyster dock at midnight so as to be there when the very first boats rolled in. Sometimes, he even took a boat out into the river to meet incoming oystermen out there and choose the very best of their catch.

Here is another sign of just how smart a businessman he was. After buying all the oysters he would need for a day, Downing often lingered at the docks, waiting for the moment when other buyers would start haggling over prices with oystermen. Downing jumped into to those conversations, bidding up the price even as both he and the oystermen knew that Downing didn’t really want to buy any more oysters. It was gestures like that that left those oystermen feeling all warm and fuzzy about doing business with Downing’s Oyster House.

A Leading Light in the Causes of His Time

Incredibly, Downing found time for all sorts of other pursuits as well. He belonged to several fraternal organizations, including the Masons and the Odd Fellows. He was active in the New York Society for the Promotion of Education among Colored Children and the New York African Society for Mutual Relief, which helped black widows and orphans, as well as black men unable to work due to injury or disability. He helped to found the Committee of Thirteen, which came to the aid of the free black men and women who were being kidnapped and sold into slavery along the sold-called “Reverse Underground Railroad.”

Did Downing himself work on the Underground Railroad, helping escaped slaves stay hidden in New York and make their way farther north? I have not come across any firm documentation of specific escapes, but I did come across an interview in which a curator at the National Museum of African American History and Culture says in no uncertain terms that he “harbored refugees, slaves, and slaves on-the-run” in his oyster cellars.

Downing was a proud man who carried himself with a “kingly bearing.” Several accounts of his life in books and journals include an anecdote in which he refused to give up his seat on a street car a full century before Rosa Parks would do the same on a bus in Montgomery, Alabama.

He also had a sharp sense of humor. During a cholera epidemic, there were worries that bad oysters might be involved in causing or spreading the disease. Asked about this, Downing replied, “If any gentleman can prove he died of the oysters I work in, I’ll pay his expenses to Greenwood,” referring to one of New York’s most famous cemeteries.

Downing suffered a stroke in the early 1860s. It’s unclear how much he knew about the momentous events that were unfolding in those Civil War years. His death on April 10, 1866 was noted prominently by any number of New York newspapers. In fact, the New York City Chamber of Commerce closed its offices for a day so that everyone could attend his funeral.

A decade before that, in 1855, the New York Evening Post had this to say in a lengthy profile of the “Oyster King of New York:”

To those who do not know Mr. Downing (everyone knows him here), it may be proper to say that he is one of the most respectable and aged colored men in this city. His private character is without reproach; he has made a large fortune as the keeper of a refectory, which is frequented daily by throngs of the principal bankers and merchants of Wall and Broad streets and their vicinity.

… [D]uring his long and uninterrupted success [he has] never forgotten the humility and modesty which is one of his most noticeable characteristics. and it would be difficult to detect the slightest change wrought in the character or deportment of the old man since he became what he has been for many years, a man of fortune, except in the magnitude of his donations for the relief of his oppressed race.

–Posted by Jim Duffy on Feb. 9, 2019. Copyright Secrets of the Eastern Shore and Whimbrel Creations, LLC. All rights reserved.