By Secrets of the Eastern ShoreOctober 3, 2020No Comments

This is an excerpt from the trip to Berlin, Md. in 2nd edition of Eastern Shore Road Trips #1: 27 One-Day Adventures on Delmarva. This section wasn’t in the first edition, alas, as I learned about it after the book came out. But I couldn’t resist adding it when updating that 2016 book for the 2020s.

The most famous Berlin resident of them all was a transplant, not a native. That would be Man o’ War, who earned the title of “greatest horse who ever lived” by winning 20 of 21 races in the early 1920s and then siring offspring who in turn won an incredible 124 more stakes races. (One of those offspring was the Triple Crown winner War Admiral—yes, the one who so famously raced against Seabiscuit in 1938.)

The man who brought Man o’ War to Berlin was Sam Riddle, a Philadelphian who turned his attention to horses after making a fortune in textiles. He had gotten to know the Berlin area by way of fox-hunting trips and decided it was the perfect spot for a world-class horse farm. Man o’ War spent his racing years on Glen Riddle Farm about three miles outside of town. Under Riddle’s care, the spread grew to 500 luxurious acres with a 15-room mansion chock full of priceless antiques. 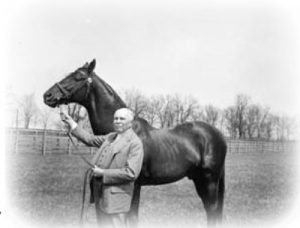 It’s hard to fathom just how big a deal Man o’ War was during his racing days. Every time he set hooves on track, attendance records were broken. Riddle had to hire armed guards to protect him from souvenir hunters determined to pluck out bits of his hair. Man o’ War set one track record that lasted an astonishing 42 years. Riddle declined an offer to buy him for $1 million, and that offer came in 35 years before any horse actually fetched a seven-figure price. Man o’ War’s funeral was broadcast nationally on the radio.

The Riddle family kept on raising horses on Glen Riddle farm after Sam died in 1951. Alas, the mansion burned in 1969, and the farm fell into disarray after that. The acreage is mostly a housing development now, but you can commune with Man o’ War in the clubhouse and restaurant at the Glen Riddle Golf Club—it occupies a refurbished and expanded version of the building that used to house the main stable on the farm. There is lots of Man o’ War art and memorabilia on display.

You can delve a little deeper into this and other bits and pieces of local history by heading a few blocks outside of downtown along North Main Street to the Calvin B. Taylor Museum, which occupies a family home that dates to 1832. A community group, the Berlin Heritage Foundation, rescued it from the wrecking ball in the early 1980s.

NOTE #1: If you would like to spend 25 minutes listening to the national live radio broadcast of Man o’ War’s funeral–well, here you go.

NOTE#2: Man o’ War ventured up to Baltimore to run in the 1920 Preakness Stakes. Here is an excerpt from one account of that race by racing writer Tom Hall: 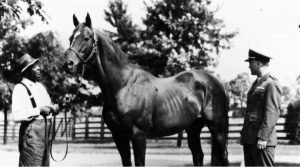 “Racegoers crowded every conceivable space on a cool spring afternoon to catch a glimpse of a big red machine grinding toward legendary status.

“From the springing of the starting barrier, it was all Man o’ War. In a matter of just a few strides, he separated himself from the field and was playing fox to the hounds chasing him. With measure rhythm of breath and stride, he led the field on a merry chase to post a toying 1 1/2-length victory over Upset, who had five lengths on Wildair. King Thrush was another five lengths behind in fourth.”