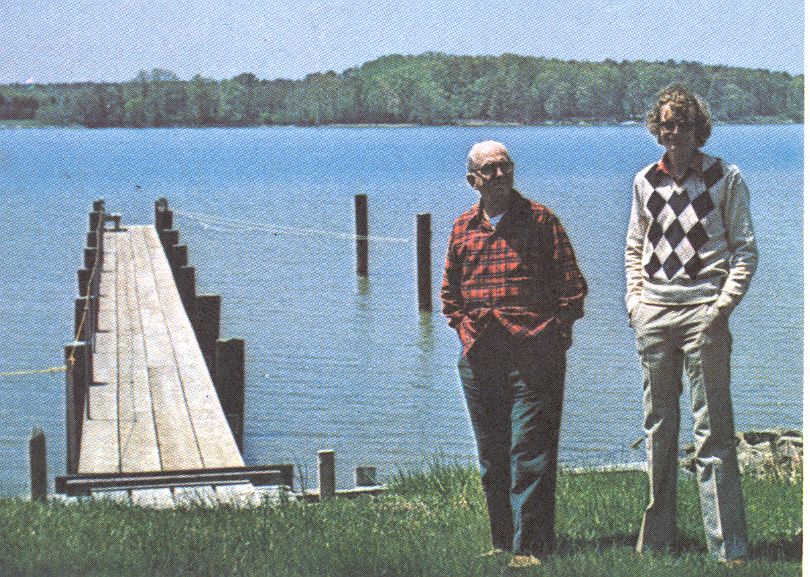 This is an excerpt from Eastern Shore Road Trips #2: 26 MORE One-Day Adventures on Delmarva. At the end of each trip in the book, there is a postscript section that tells a bit of historical or natural lore attached to the trip. This is at the end of the chapter about visiting St. Michaels, Md.

By the time Chesapeake was published in June of 1978, James Michener was richer than God. This is a guy who sold 75 million books during his lifetime. He confessed to a journalist once that he could have retired on the earnings of his first book, Tales of the South Pacific (1947), which was the source material for a certain Broadway hit.

Michener and his wife, Mari, moved to St. Michaels for a couple of years during the mid-1970s, living first right in town on Railroad Avenue and later on a waterfront spread outside of town. Here’s the odd thing: Visitors to the Michener abode were surprised by the ragtag character of the place. A swivel armchair in the study was “in shreds.” The desk was a makeshift contraption, “two borrowed tables pushed together.” Michener’s typewriter was “a sorry contraption with the front cover gone.” He kept a cache of safety pins on his desk to help unstick stubborn keys.

And here’s the odder thing: In the kitchen, the freezer was stacked floor to ceiling with boxes of Mrs. Paul’s Fish Sticks. Another friend from those days recalls seeing “cases—literally, cases—of canned fruit, everywhere.” When Mari and James served up fish sticks, they did so on a table stocked with packets of ketchup and other condiments that had been liberated from area restaurants. In an interview later in life, Michener confessed:

“I still worry about having enough money. I live every day as if the [Depression-era Works Progress Administration] were coming back again.”

Storyteller Without a Back Story

As famous as Michener was for the exhaustive research that went into his novels, he never got to the bottom of his own story. Abandoned as an infant by a mother he would never meet, he landed in the care of one Mabel Michener in Doylestown, Pa. For a long time he thought Mabel was his mother. She ran a makeshift orphanage out of her house. Mabel took in laundry and did some sewing to help make ends meet. On three occasions that Michener could remember, she (and he) landed in the poorhouse, unable to keep up with the bills. “It’s a real American experience,” Michener recalled. “If you come through it, it’s not a bad experience.”

What could be good about it? Well, there were evenings when Mabel would read to her young charges from books by the greatest of storytellers—Homer, Dickens, and others. There was the local library—by age 10, Michener had read every book in the children’s section. Then there was the old Victrola:

“I am one of the few people around who grew up in abject poverty, listening to [opera singer Enrico] Caruso.”

The valedictorian of his high school class, Michener earned a scholarship to Swarthmore College. While there, he received a string of mean-spirited, anonymous letters from someone in Mabel’s family, informing him that Mabel was not his biological mother and telling him he was not a “real” Michener.

The Road to Chesapeake 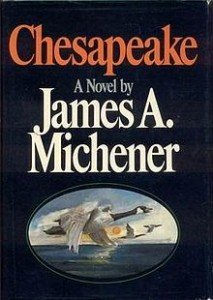 Tossing that heartbreak aside, Michener got about living a life that turned into quite an adventure. After graduating from Swarthmore College in 1929, he studied for a bit in Scotland, then burned through jobs as a teacher, a Chautauqua actor, and a coal-ship laborer. When World War II came along, Michener served with the Navy. He received a plum assignment by accident—his superiors mistook him for a VIP, the son of an admiral with the sound-alike name of Marc Mitscher. That job had him writing human interest stories for military publications about the lives of various groups of sailors he followed around in the Pacific theater. Back home and living in New York City, he transformed that material into his first novel. Tales of the South Pacific won the Pulitzer Prize in 1947.

What drew Michener to the Eastern Shore in the 1970s were memories of sailing the upper bay in his college days. He conducted countless interviews for Chesapeake and spent more than his share of time hunched over manuscripts in the Maryland Room of the Talbot County Free Library in Easton. His research went on for one year, then two, and into a third.

Finally, he planted himself in that shabby chair in front of that raggedy typewriter and started knocking out the book. By this time in life, his childhood love for Caruso had given way to a different sort of musical passion. The song that Michener listened to over and over again while writing Chesapeake was “Yakety Yak,” by the Coasters.