By Secrets of the Eastern ShoreMay 30, 2020No Comments

This excerpt from Eastern Shore Road Trips #2: 26 MORE One-Day Adventures on Delmarva comes from a trip centered on Accomac, the seat of Accomack County, Va. The town played an important role in the life of the preacher Elijah Baker (1742 to 1798), who helped get the then-fledgling Baptist faith off the ground and spreading through America.

The most famous structure on the square in Accomac, Va. is the Debtor’s Prison, a small and rather nondescript brick affair built in 1783 to stand inside of a walled prison yard. It served as a home for jailers until the early 1800s, when it morphed into the place where people landed if they fell behind on their finances and couldn’t pay a court fee or a tax bill.

A man named Elijah Baker spent some quality time in the Drummondtown jail before that old building even went up. Born in 1742 on the western shore of Virginia, Baker took a wayward, sinful path through his younger years, until, as a biographer put it:

“[God] who is rich in mercy, checked him in his course of sensuality, and gave a new direction to his desires.”

Baker was 27 years old when he took the plunge in the sort of full-immersion ceremony that gave the then-fledgling Baptist faith its name. After that,

“Churches sprang up wherever he went.”

A friend from the Eastern Shore invited Baker to sail over and spread some Good News on this side of the Chesapeake Bay. He arrived on Easter Sunday in the momentous year of 1776. By that point, the religious revolution known as the First Great Awakening had already rolled through other colonies. Here in Virginia, however, the Methodist, Presbyterian, and Baptist faiths were still mostly unknown—and decidedly unwelcome.

Baker intended to keep things low key that day by quietly attending an Easter service at a church on Old Plantation Creek, near Cape Charles. But when that church’s traveling rector failed to show, Baker told the disappointed faithful that he would preach if anyone wanted to listen.

He headed into some nearby woods, where, depending on which account you read, he either stepped atop a big old tree stump or used a sawhorse as a makeshift pulpit. The locals who ventured into those woods were accustomed to preaching by ministers who came from the upper crust of society. Baker didn’t offer much in the way of sophistication and education.

“[He was] a man of low parentage, small learning, and confined abilities. But with one talent he did more than many did with five.”

Most of those locals were appalled by what they heard, but a handful seemed intrigued. Baker promised to come back and celebrate Pentecost with them. After that second crossing of the Chesapeake Bay, he never again went back to his home turf on the western shore, devoting the rest of his days to “planting” an astounding 15 churches on Delmarva—six in Virginia, five in Maryland, and four in Delaware.

Preaching from Behind Bars 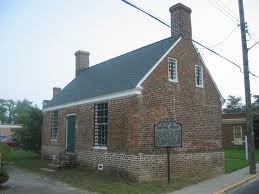 The Debtors Prison in Accomac, Va.

First on that list was Lower Northampton Baptist Church in that Cape Charles area, where he baptized five believers in 1778. He came to Drummondtown next, but the Anglican powers that be sprang into action here. Arrested on trumped-up charges of vagrancy and unable to pay bail, he spent 56 days locked up here that summer, awaiting trial.

Baker didn’t let that predicament keep him from pursuing his calling. He preached through windows with metal bars, hoping someone might be within earshot. By some accounts, he was pelted with rocks or fruit while engaged in this work.

When his trial date finally arrived in August, those Anglican powers that be didn’t bother to show up and press their iffy case. But Baker’s Accomac ordeal wasn’t quite over. None too pleased about the release of this heretic, local men kidnapped the Baptist and dumped him aboard a ship bound for Europe, telling the captain to take this troublemaker across the ocean. Several legends have grown up around Baker’s escape from this predicament—the simplest of the stories is that when the ship’s captain heard Baker preaching to crew members, he decided not to play a part in kidnapping a decent, faithful man.

For the rest of his days, Baker wandered the Delmarva Peninsula, planting those churches. He was about that work in Salisbury, Md. when he died at 56 years of age in 1798. No one knows today where the faithful Baptists of Salisbury buried their leader, but it’s still possible to pay respects by finding your way to a marker here in Accomac that honors his legacy. We’ll get there after strolling past a couple of other spots in this pretty and historic burg.

The full Road Trip to Accomac is basically a stroll through one of the Eastern Shore’s most historic towns. In addition to the town square and the debtor’s prison, the chapter includes stops at the courthouse and several other historic churches–Episocopal, Methodist, and Presbyterian–while walking past gardens and historic homes. The trip ends at the intersection of Back and Front streets, where there is a historic marker in honor of Elijah Baker.