By Secrets of the Eastern ShoreMay 27, 2019No Comments

Meet Charlie Adams. It was back in 1939 that he first set up shop outside of Gordon’s Confectionary, selling copies of the Crisfield Times newspaper. He was five years old then. By the time “Mister Charlie” finally retired from the corner paperboy game, it was 2006, and he was 72 years old. As the years went on, he became quite a celebrity: “I’ve met a lot of nice people. I’ve signed a lot of autographs.” 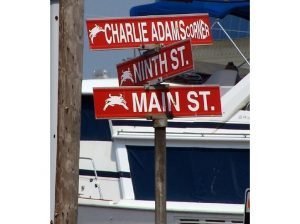 In honor of his 67 years of hard work, the Crisfield City Council erected a sign at Ninth & Main a few years back officially designating it as “Charlie Adams Corner.”

Adams has also turned in a lifetime of service at the postcard-pretty Crisfield Veterans Cemetery. He started cutting the grass and tidying up there as a little boy, always working alongside his veteran father, Upshur. It was the two of them who launched the Memorial Day weekend tradition in Crisfield of laying a flag & a rose at the grave of each and every veteran.

In a gesture of gratitude, the local veteran’s group gave Charlie Adams special permission to be buried next to his father and amid all the vets when the time comes. Thank you, Mister Charlie! You can see him in this video, “Crisfield’s Paper Boy,” done by another great Crisfield character, the late Scorchy Tawes.