Home / Characters / Character of the Day: The Delaware Housewife Who Invented the Modern Chicken Industry

As a deeply religious young woman, Cecile Long Steele probably didn’t let loose with a string of curse words when the delivery truck driver showed up at her farm that day in 1923. Cecile had ordered 50 baby chicks, but the deliveryman had 500 chicks instead.

This being 1923, Cecile couldn’t call or text customer service to sort out this mix-up on the spot. The delivery guy had paperwork saying 500 chicks, and that was that. The folks who knew Cecile Steele best say she had quite a temper. Perhaps, as the truck pulled away, the words in her mind fell between a curse and a prayer:

In answering that question, this Southern Delaware housewife managed to invent a whole new industry, one that still ranks today as a big deal on Delmarva. More than 4 billion pounds of chicken meat were processed on the peninsula in 2019—output that involved 5,114 chicken houses managed by 1,325 chicken growers and staffed by 20,391 employees who earned a combined $780 million in wages. All thanks to that God-fearing, fiery-tempered, red-headed housewife.

The World in Which Cecile Steele Worked Her Magic

Before Cecile Steele, the poultry sector of the regional economy barely existed. Farmers raised chickens, of course, but mainly to keep their own households in eggs. That’s why Cecile Steele ordered 50 eggs in 1923. Now and again those chickens laid too many eggs. Farm families used those extras to barter with local shopkeepers.

A few fledgling firms were jumping into the poultry egg game at about this time, including the soon-to-be-famous Perdue family in Salisbury. But no one on Delmarva—or beyond, for that matter—was growing chickens with an eye on the dinner-table meat market.  The only time chickens ended up in a stew pot back then is when they got older and slowed down on egg-laying.

By that point, the chickens were mostly skin and bones. One traveler through the region in those days summed things up this way: “There is no dish so often turned away untasted.”

In history books, the shorthand for the decade at hand here is the “Roaring 20s.” Farmers in Delaware didn’t get a share of that high-flying economy. The state had long been famous for its peaches, but those trees were being wiped out by a devastating blight called the “yellows.” Many farmers jumped into strawberries after their peach trees died, only to land in the same sort of mess due to a pesky fungus spreading through those fields. To make matters worse, the fishing industry was in a funk. Oyster, crab, clam, and menhaden harvests were all down, due to a mix of overfishing and pollution, combined with a run of abnormally high salinity levels. 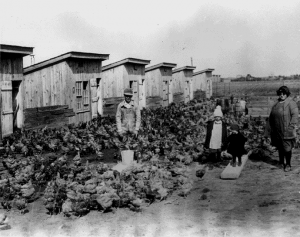 Cecile Steele is off to the far right in this photo of her chicken operation.

This is the world where Cecile Steele worked her entrepreneurial magic. Not much is known about her childhood. The public record of her life begins with her marriage to David Wilmer Steele (everyone called him “Wilmer”), at which point the couple set up shop on a farm in Ocean View. Today, that town ranks as a thriving bedroom community outside the resort town of Bethany Beach. But Bethany had not yet come into its own back in Cecile Steele’s day—the first-ever business on the boardwalk there opened in 1923.

Ocean View was a remote backwater, and the Steeles were dirt poor. Wilmer’s mother died when he was seven. His father was what everyone referred then as a “cripple.” Wilmer made it through the third grade in school—that’s it. When he married Cecile the two had a patch of land—that’s it. Many years later, their eldest son would recall how the family “bagged cornstalks” early on for use as mattresses.

But the Steeles caught a break. Wilmer landed a full-time job with the Coast Guard in Bethany Beach. The pay wasn’t much, but it was secure and regular. Managing the farm fell almost completely on Cecile’s shoulders—she was still quite young, in her 20s on that day that delivery truck arrived. Responsibility for the clerical error in that shipment belongs to an anonymous clerk at a chicken hatchery in nearby Dagsboro owned by Vernon Deen.

Stuck with 10 times more chicks than she ordered, Cecile had to figure out how to turn chicken you-know-what into chicken salad, economically speaking. According to family legend, she stored the chicks temporarily in a repurposed piano box while at the same time asking Roland Beauchamp, a lumberman from Berlin, Md. to build her a new, bigger shed. 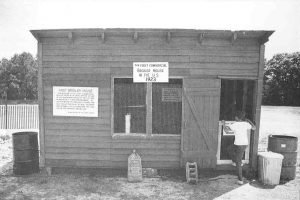 Cecile Steele’s first chicken house, on display in the 1970s.

That shed is now listed on the prestigious National Register of Historic Places. You can go see it, actually, by stopping at the Delaware Agricultural Museum when you are traveling through Dover.

Over the next 18 weeks Cecile brought 387 of those 500 birds to maturity. Along the way, she did her best to make them fat and juicy. She sold the survivors as meat to city hotels and restaurants for 62 cents a pound, turning a nice little profit.

The Wilmers bought themselves a new car. Wilmer quit his job at the coast guard. In 1928, the couple ordered 26,000 chicks. By this point, Wilmer had taken over the reins of the business that Cecile invented.

The Steeles were not the first people to try something like this. The historical record includes perhaps half a dozen or so prior attempts, the earliest by a New Jersey farmer in 1880. But the Steeles were the first to succeed, and their neighbors quickly took note of what was happening. Desperate for alternatives in the face of peach blight and strawberry fungus, they grabbed the coattails of Cecile Steele.

By 1928, 500 farmers on Delmarva had joined her chicken-broiler revolution. Companies like Perdue that were previously specializing in eggs started entering this so-called “broiler” market as well.

The timing was perfect. The roaring ‘20s economy in nearby big cities meant millions of families had the financial wherewithal to put chicken meat on the table. Transportation improvements, refrigeration advances, and the rise of chain grocery stores made getting product to those customers a simple, speedy affair. Delmarva proved a perfect place for this fledgling industry, with its mild climate, sandy soils, abundant lumber, cheap labor, and proximity to the big-city markets.

An Accidental End to the Steele Saga 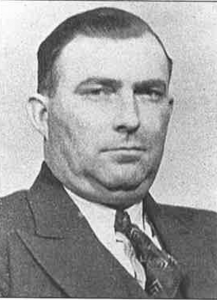 Despite the competition that soon arose, the Steeles did just fine. They eventually took a left turn in the chicken game, partnering with a man named George Keen to start a business that offered vaccinations against chicken disease. In 1937, D. Wilmer Steele—the man with the third-grade education, as you’ll recall—won election to the state senate.

The Steeles bought themselves a $10,000 yacht, named The Lure. They built themselves a sweet new house along the main drag in Ocean View. Actually, you can eat dinner there nowadays, as it has since been transformed into the Café on 26.

Alas, the life of luxury that Cecile and Wilmer had earned through their labors wasn’t meant to last. On Oct. 7, 1940, the Steeles took three guests out fishing on The Lure. They were off of Ocean City when the carburetor backfired, igniting gasoline fumes and setting off an explosion. The three guests survived, but both Steeles died, leaving four children behind. Cecile and Wilmer are resting today at Mariner’s Bethel United Methodist Church in Ocean View.

The newspaper stories that appeared around the time of the tragedy focus almost entirely on Wilmer, especially his business and political positions. The ones that I reviewed didn’t even mention Cecile’s role in founding the broiler industry.

In time, however, that injustice would be rectified, thanks to the efforts of many different groups and institutions who worked to spread the word of Cecile’s accomplishments. Things really took off after the historian William H. Williams documented the legend of Cecile Steele as undeniable fact in his 1998 book, Delmarva’s Chicken Industry: 75 Years of Progress. Here in the 21st century, Cecile Steele is widely celebrated on the Delmarva Peninsula. Her story has been told countless times in newspaper articles, book chapters, TV news segments, and museum displays that recognize the pivotal role she played in launching an industry that remains, even a century later, one of the region’s prime economic drivers.

–written and posted by Jim Duffy on May 27, 2020 for Secrets of the Eastern Shore and Whimbrel Creations, LLC. All rights reserved.

I need to add a couple of things here so as to do full justice to the impact of Cecile Steele’s entrepreneurial innovation. Farmers didn’t use much in the way of fertilizer back in the 1920s. By modern standards, the yields from their fields were pitiful—20 or 30 bushels of corn per acre, according to historians.

Cecile Steele changed this. As the Delmarva poultry population skyrocketed in the wake of her success, so, too, did the amount of chicken poop that needed to be dealt with. Once farmers here started putting that poop to work as fertilizer, yields tripled to something like 80 bushels of corn an acre. (Further advances have helped that number to climb up past 200 bushels an acre today.)

And one more thing: All those chickens need food to eat. For decades now, this simple fact has been the prime driver of farming on Delmarva. Most of the fields of corn and soybeans you see while traveling the highways and backroads of the peninsula are, literally, chicken feed. According to the most recent estimate I’ve seen, chickens outnumber humans by 200 to 1 on Delmarva nowadays.

In the end, then, Cecile Steele didn’t just create a new industry—she also transformed an old one. In the words of the late Bill Saterfield, a former leader of the Delmarva Poultry Industry association, she completely “changed the face of agriculture.”

Thank you very much for reading. This is an early draft of a chapter in a book I’m working on. Feedback and suggestions are very welcome at SecretsoftheEasternShore@gmail.com.