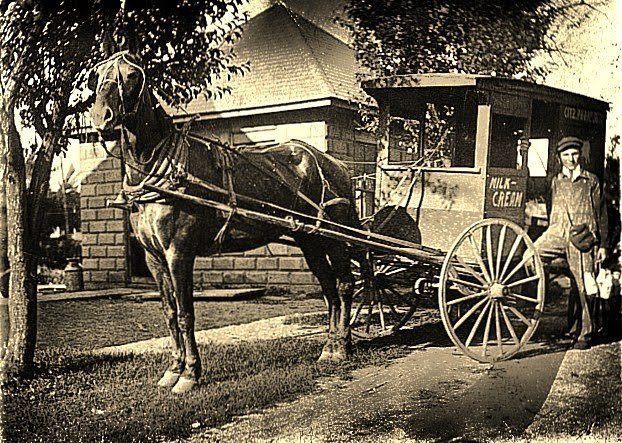 QUOTE OF THE DAY: The Cape Charles Milkman Remembers-“That Horse’s Name Was Frank”

Home / Way Back Machine / Quote of the Day / QUOTE OF THE DAY: The Cape Charles Milkman Remembers-“That Horse’s Name Was Frank”

History lovers in Cape Charles, Virginia rounded up some grant money a few years back and conducted oral history interviews with some older residents there. Here is David Mitchell, remembering his days of delivering milk aboard a horse-drawn carriage through Cape Charles.

At an early age my Uncle Jesse had me working. He used to do a little gardening and he would sell butter beans and tomatoes and stuff from his garden. And he would take orders from private homes and we had to help shell [the butter beans] and so forth. And, of course, he would give us a little bit for helping and delivering.

Mr. Gladstone had a dairy [in Cape Charles], over on the other side of Washington Avenue. They had fields along it, but no fence. So I happened to be out there playing one day and he came by and asked me if I wanted to keep the cows from going out in the street. He’d give me something for doing it. Well, I was playing anyway, so I told him yes. So I would just throw a rock out and make them go back and then I would continue to play.

When I got old enough to do a man-sized job, [Mr. Gladstone] gave me a regular job of helping to milk the cows, bottle the milk, and deliver. They had glass bottles then, delivered door to door.

It’s not too many porches in this town that I haven’t gone up on to deliver milk. We had a horse and wagon then. That horse, you call it horse sense, he had human sense! He would trot along the route that we would have to go and he knew the route that well that you really didn’t have to give him the reins to turn the corner or pull him up to stop. He would just trot along the curb. He would come out and pass a car and go by it and go back to the curb and just continue to trot along. And we would jump out on each side of the wagon, run to the doors, put the milk down on the porch, come back and pick up some more milk.

And then they got another horse, I don’t remember his name, but he was just too fast.  He was real lively and a bright tan color and long mane and he just ran to go all the time!  You had to hold back on him all the time.

There is more with Mr. Mitchell here.

— The photo up top here is a general historic image. I was unable to locate anything specific from Cape Charles.