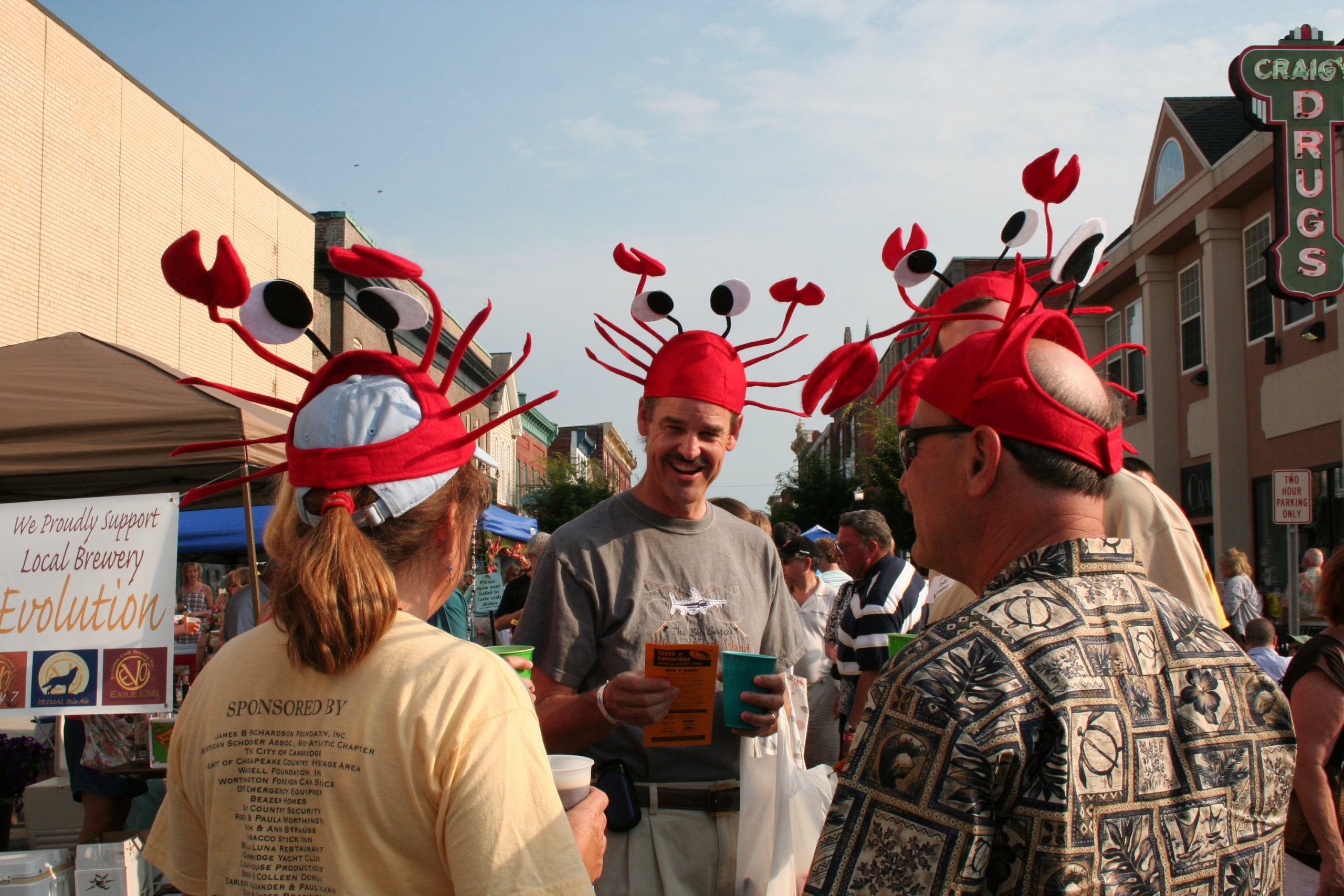 Cambridge, the Comeback Kid of the Eastern Shore

Cambridge is the comeback kid on the Eastern Shore these days. The restaurant and bar scene is hopping. The waterfront is getting spruced up. And best of all the town just seems to have character to spare these days—it’s the kind of place where they build downtown Christmas trees out of crab baskets, compete in crazy tricycle races while wearing goofy costumes, and throw muskrat stew parties outdoors in the middle of winter.

The comeback has been a long time coming. This town of 10,000 spent much of the 20th century with all of its economic eggs in one basket, a humongous food-processing outfit called The Phillips Packing Company. When Phillips went belly up 1960, the town fell on hard times.

Things didn’t really start to pick up again until 2002, when Hyatt opened a swank riverfront resort on the outskirts of town and a handful of brave souls decided it was time to open up shops in a mostly shuttered old downtown. My wife and I moved to Cambridge a little after that, in 2004, so yes, I’m biased. One of the cool things about the resurgence in Cambridge is that so many of the entrepreneurs behind it are energetic young locals determined to do their part for the town. Ian Campbell (left) was working with world-renowned chef Thomas Keller in California when he decided to come back home and open Bistro Poplar, which is my favorite restaurant not just in Cambridge, but on the whole Shore.

A few months after another local, Amanda Bramble, opened the doors at her Jimmie & Sook’s Raw Bar and Grill, newsman Tom Brokaw put her on national TV as a model for a new kind of 21st century entrepreneurship. Chris Brohawn and J.T. Merryweather, the guys behind the first-rate RAR brewpub, are locals, too.

My first bit of advice about daytripping in Cambridge is this: Bring an appetite. There is some fine cooking going on in town these days. It’s a nice town for strolling. The prettiest walk runs along brick-lined High Street between downtown and the two-mile-wide Choptank River waterfront. Out on the water at Long Wharf Park is a postcard-pretty Choptank River Lighthouse, which is open for self-guided visits in the warmer months and features some interesting museum-style exhibit materials.

You can sign on for sails out of Long Wharf aboard the skipjack Nathan of Dorchester most Saturdays and some Sundays in season. The weekly Farmer’s Market is held out here, too—it’s on Thursday afternoons. Also, there are guided walking tours between downtown and Long Wharf on Saturday mornings. Here is where to go to double check that these schedules are still in effect.

On the way back, take the turn from High Street onto Commerce Street (yes, it looks like an alley) and look for the red shack out on Cambridge Creek. That’s J.M. Clayton’s, the world’s oldest crab company. It’s operated nowadays by fourth- and fifth-generation descendants of John Morgan Clayton, who founded the company in 1890. Inside, they will sell you fresh-as-can-be crabmeat in season. They also have souvenir caps and t-shirts. Back downtown, you will find a few nice shops and galleries for your browsing and buying pleasure. The top-flight new historic rehab jobs you see on some old buildings are the work of a Washington, D.C. company, NOVO Development. NOVO owns half a dozen or so downtown buildings and helped bring in the talented chef, Patrick Fanning, who as of this writing has three different eateries going–The High Spot, Stoked Wood-Fired Eatery, and Black Water coffee shop.

Coffee hounds should also stop in at The Shops at Magnolia Grove, where my foodie friend Taylor Hale is roasting first-rate beans imported through specialty suppliers. His Night Kitchen operation is in the back of the combination shop/gallery run by his wife, Leslie Grove.

A bit farther up the street is the small, volunteer-run Harriet Tubman Museum, which pays tribute to the native daughter of the nearby countryside and heroine of the Underground Railroad. (A state park and national monument honoring Tubman are both in development out in that countryside for the coming years.)

Speaking of coming attractions, there is talk in town of a development in the works on what’s known as the “Sailwinds” property, which covers about 15 waterfront acres located a few blocks from downtown. Some mix of parkland, retail, restaurant, and residential is the most likely scope of the project. If you’re looking for another pretty place to stroll, find your way here and just follow the trail along the riverfront.

Outside the downtown, be sure and stop at Crabi Gras, a fun shop on Route 50 that specializes in hot sauces, spice rubs, and specialty dips, along with a line of clever Eastern Shore-themed T-shirts and hats. Just up the street from Crabi is Ocean Odyssey, a restaurant owned by a prominent watermen family, the Todds. Their talented young chef, Travis Todd (another local), recently took a star turn as Jesus in a community theater production of “Godspell.” Did I mention that this town seems to have character to spare nowadays?

The entrance to the Hyatt is out on the highway as well. Believe it or not, the resort is right across from Wal-Mart, on the site of an old psychiatric hospital. But it really is a gorgeous property and well worth a stop. Visitors are welcome to stroll around the grounds and have drinks or a meal in one of the restaurants. Sunset cruises are available to the public out of the Hyatt in the warmer months through a local company, Blackwater Paddle and Pedal.

Cambridge still has a ways to go. A couple of blocks in the downtown area remain sad and downtrodden. There are a lot of big-box and little-box vacancies in the malls out on the highway. But the town really does seem to be getting over the hump at long last—fingers crossed, anyway. The best sources for information about visiting Cambridge are Dorchester County Tourism and Cambridge Main Street. The number to dial with questions is 410.228.1000. Among the top events of the year in Cambridge are a big crab cook-off in July (yes, you can get tastings); a block party with the aforementioned tricycle races in September; and Schooner Rendezvous weekend in late October. There is also an annual Choptank Heritage Skipjack Race in September. And the aforementioned muskrat stew festival is in late February.

Blackwater National Wildlife Refuge has spectacular scenery and a bevy of birds.

Remote Hoopers Island is a destination that will take you along some gorgeous backroads and past some stunning water views. If you go, have lunch or dinner at Old Salty’s. Downtown Cambridge is part of the Harriet Tubman Byway, a 125-mile driving tour that  encompasses some 30 points of interest.

There is lots to do in Easton, 15 miles away.

Here is the story of the Freedom House (at right), which is going to be featured in another Secrets book about “Strange & Wondrous Things to See” on the Shore. It’s about six blocks west of downtown Cambridge, at 1106 Locust Street.

All of the photos here are by Jill Jasuta Photography.