By Secrets of the Eastern ShoreApril 8, 2022No Comments

I was looking up something else in the Nov. 6, 1934 edition of the Cecil Whig newspaper when I stumbled into Isaac Solomon. My attention wandered across the page and landed on this headline: Negro, Who Went Hungry to Feed Racehorses, Dies.

Here are a few tidbits from that story:
• The death of Isaac Solomon, Negro racehorse fancier, was something like the passing of a lost cause.
• Isaac died at Union Hospital [in Elkton, Md.] yesterday. It may have been that hunger, the pang of which he often felt when either he or his two ‘ponies’ had to eat, had something to do with hastening his end, for there were many times that the Negro would go without food in order to buy oats for his racing horses.
• Solomon’s ‘lost cause,’ so to speak, was the ‘outlaw race track’ which spring up in this section about 30 years ago. He came to town with his two racers and expected to be a ‘kingfish’ among the Negro followers of the track. The race track was outlawed, and Solomon was left with his two racehorses to feed.

Intrigued, I went looking for more. There aren’t very many bread crumbs left along the trail that “The Horse Lover of Elkton” took through life, but there are a few.

• Another newspaper that reported on his death guesstimated that Mr. Solomon had lived to the age of “about” 70 years.
• Everyone in town knew Isaac Solomon by the nickname of “Cook” or “Cookie.”
• He never married. No one in Elkton was aware that he had any relatives. He lived alone, unless you count those horses.

If you had a business that needed things blown up, Isaac Solomon was the guy to call.
• The Cecil Whig, Aug. 15, 1908:
Monday afternoon an old chipper casting, weighing 17 tons, was broken up by dynamite at the Radnor Pulp Mill. Isaac Solomon, colored, or “Cook” as he is better known, had charge of the dynamiting.
• The Cecil Whig, Jan. 30, 1909:
‘Cook,’ otherwise Isaac Solomon, colored, has been treating Elkton to small-scale earthquake shocks the past week, blowing up with dynamite heavy castings brought here from the ironworks at North East.
• Isaac Solomon was still at this sort of work in 1926, when he submitted a bid of $1,000 on a job to used explosives in digging a pair of wells along the Chesapeake & Delaware Canal.

• The Democratic Advocate in Westminster, Md., July 1921:
Joseph Shivery was held under $300 bond for action of the Grand Jury on the charge of stealing $80 from Isaac Solomon of Elkton.
• The Wilmington (Del.) Evening Journal, Aug. 16, 1926:
When Isaac Solomon, colored, who had been away for the day, returned to his home about 8 o’clock last night he surprised three men in his chicken house and later found they had wrung the necks of several hens, ready to take them away. Solomon on seeing the men in the chicken house ran into his house after a gun. The men saw Solomon at the same time and started to make a quick get-away.
• One of the alleged thieves, 23-year-old Harry Shivery, was struck by a car while fleeing across a nearby road. He died of his injuries.
• Four days later, the Evening Journal reported that the two other alleged thieves, Lyle Shaffer and Enoch Ferguson, had been released from custody after Isaac Solomon decided to withdraw all charges he had filed against them.

• Isaac Solomon once jumped into action to help a neighboring business. The Cecil Whig, Dec. 9, 1908:
A blaze in an outbuilding adjoining the cannery Wednesday morning, noticed by Isaac Solomon, colored, was put out by him and the watchman. The story does not mention which cannery. 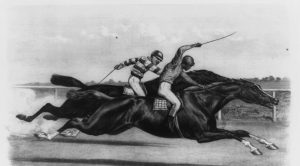 • Isaac Solomon was arrested with two other black men on May 27, 1916. The Cecil Whig reported:
[He was] charged with crap shooting and conducting a gambling house in Elkton.
• The Baltimore Sun reported results of horse races at the New Castle (Del.) Fair on Sept. 3, 1908. The winner of a five-furlong race was a horse named Wee Girl. Alas:
Dr. Dunn, entered by Isaac Solomon, a colored owner of Elkton, Md., ran last.
• Results of horse races at the Wilmington (Del.) Fair in 1907 turned out better. The Baltimore Sun, Sept. 7:
A “prize of $50 was offered for a half-mile running race. The latter was won by Dr. Dunn, entered by Isaac Solomon, of Elkton.”

• The house where Isaac Solomon lived was located on “the Elkton-Cherry Hill road,” which was known as “Plank Road” in earlier times. The house burned to the ground a few months after the death of Isaac Solomon. The Wilmington News Journal reported that the structure ranked as historic–it was the “last toll house in Cecil County.” 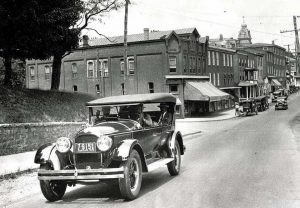 Main Street in Elkton during the 1930s

• That 1935 story mentions that Isaac Solomon—“or ‘Cookie,’ as he was familiarly known”—spent the last 15 years of his life in that old toll house.
When the present business depression set in, he found it a hard job to make money to buy feed for his nags. It was reliably reported that many times he went without food for himself in order to get hay and oats for his horses.

I never came across any information about what happened to the two horses that Mr. Solomon was feeding and caring for at the time of his death. Here’s hoping he and his horses are resting together in peace, free from the pangs of hunger that marked their last years together in life.

–written and posted by Jim Duffy for Secrets of the Eastern Shore/Whimbrel Creations LLC. All rights reserved.

NOTE: I did not come across a photo of Mr. Solomon. The image up top here is a generic one depicting a man and a horse.