By Secrets of the Eastern ShoreApril 18, 2022No Comments

A couple of years back one of those social-media waves rolled through, inspiring everyone to post their old high school graduation picture. No disrespect intended to all my friends who played that game, I didn’t see anyone on my newsfeed who had a better old photo than that of Helen Lowe, a 1903 graduate of Delmar High School.

I came across her photo in the midst of that wave and decided to try and figure out what became of her.

Of Husbands and Kittens

• Four years after posing for this portrait, Helen married Charles H. Truitt, a native of Cape Charles, Va. who had moved to Wicomico County, Md. He pitched for various baseball teams in the Eastern Shore League and the Tri-State League over a minor-league career that spanned 21 seasons. He worked at an ice company, a gas station, the county sheriff’s office, and the state comptroller’s office. 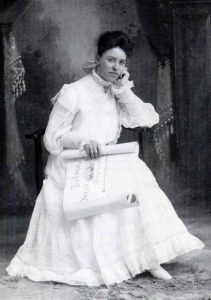 • He won election to a term as county sheriff between 1934 and 1938. In 1937, Mrs. Truitt prepared and served “a turkey dinner with mince pie, ice cream, and all the trimmings” to prisoners in the Wicomico Jail. Later, she would become the first female bailiff to work in the Wicomico County Circuit Court.

• The couple lived on East Isabella Street in Salisbury. They had a place on 11th Street in Ocean City where they spent a good part of every summer. They were not blessed with children.

• In 1942, Mrs. Truitt landed on the front page of the local paper when a pair of infant kittens were abandoned in a storm drain in front of her house on East Isabella. The rescue of “Grey Pussy” and “Black Pussy” proved quite complicated and eventually involved several city departments.
“Well, we discovered them, so I’ll take them in and feed them and find a home for them,” Mrs. Truitt told a reporter.

• In 1944, her family endured a tragedy when her nephew, Louis J. Deputy of Quantico, Md., died in a plane crash while serving over in England as a first lieutenant in the Army.

• Helen’s name pops up now and again in the Salisbury papers. She played a lot of bridge, even hosting occasional open-to-the-public instructional sessions. She was active with Ladies Auxiliary at Asbury Methodist Church and with the Wicomico Women’s Club. 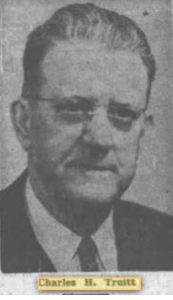 • In 1948, she and Charles landed on the sports page, featured in a lengthy story about his life as an over-the-top baseball fan who had attended every World Series game played on the East Coast since 1903. The story recounts one grueling day in which Mr. Truitt dragged his wife along to an early baseball game at Shibe Field in Philadelphia, a late afternoon game in Wilmington, and night game in Dover.

“Charley,” Mrs. Truitt recalled saying, “don’t you ever have enough baseball for one day?!”

Older Years. Plus, a Marshmallow-and-Beer Burglar

• Mr. Truitt had a stroke and died in 1957. Mrs. Truitt lost a sister the following year.

• Mrs. Truitt had quite a scare in 1959, when a young delinquent broke into her house on Isabella Street by cutting a screen in the bathroom window. The 17-year-old had stolen several cars and committed various other offenses while on the run from his native New York.

According to the paper, the young man “helped himself to beer, marshmallows, peanut butter sandwiches, and 26 pennies” during his uninvited stay with Mrs. Truitt. 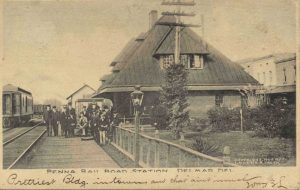 Downtown Delmar and train station, about 1906

• The former Helen Lowe died at the age of 76, two days after Christmas in 1962. According to her obituary, she is buried back home, at the “Methodist Cemetery at Delmar.”

–researched and written by Jim Duffy for Whimbrel Creations, LLC/Secrets of the Eastern Shore in April 2022. All rights reserved.

NOTE #1: I came across the graduation photo in a book titled Wicomico County and Delmar in Vintage Postcards, by John E. Jacob You can find more info about it here. I found the photo of Mr. Truitt and the old postcard of the Delmar train station on an interesting blog titled the Delmar Historical and Art Society. Warning: If you go over there, you might be scrolling for a while …

NOTE #2: I have a whole book that’s full of fun stories from Delmarva days gone by. The title is You Wouldn’t Believe! 44 Strange and Wondrous Delmarva Tales, and you can find it here.