That phrase, “a remarkably ugly fish” was perhaps the kindest phrase the environmental historian Nancy Langston employed during a 2019 talk she gave about the sturgeon. The phrases “sort of like zombies” and “basically dinosaurs” came into play as well. Langston wasn’t kidding about that last one. You’ve heard of the extinction event that wiped out the dinosaurs some 250 million years ago? The sturgeon was one of the few survivors of that cataclysm, so the creatures come by their prehistoric appearance and sometimes monumental bulk quite naturally.

Native Americans along the East Coast did some sturgeon fishing, which was quite a trick considering the lack of technology available to them and the fact that the fish could weigh in at between 500 and 600 pounds while stretching to a length of 14 feet. One description I came across makes this bit of angling sound like something from a high-speed scene in a Saturday morning cartoon:

Some tribesmen working the East Coast rivers would attempt to lasso the sturgeon using ropes made of twisted grapevines. Others preferred to attach a harpoon to the grapevine rope. As often as not, the sturgeon would bolt to the bottom after being speared, leading the fisherman who was holding the rope on a wild ride.

It’s interesting, the way early Europeans on these shores turned their noses up in disgust at the thought of fishing for sturgeon. They borrowed a bevy of dietary tidbits from the Indians—corn, oysters, potatoes, and more—but along rivers like the Delaware people regarded these dinosaur fish as nuisances that deserved to die for tearing through their nets and rocking their boats during spring migration season. Sturgeon meat was regarded as food fit only for slaves. 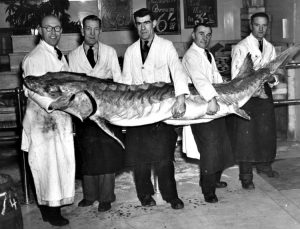 Scientists showing off a sturgeon …

But money is a powerful motivator. In the 1840s, a Philadelphia newspaper reported an oddity—that an unnamed immigrant from Russia had begun offering Delaware River fishermen a dollar per live sturgeon. That Russian then kept his sturgeon imprisoned in a river pen, something fishermen still do in Russia today while waiting for the most productive moment to extract roe from the fish and sell it as caviar.

That Russian operation didn’t become a big deal, but not long after, a German immigrant, Bendix Blohm, managed to launch a sturgeon gold rush. By the 1850s, there was a fledgling little market in sturgeon meat based on demand among the growing big-city population of East European immigrants. After a decade’s worth of fishing trial and error, Blohm launched a caviar operation on the Delaware River—it was housed in an old sawmill across from Wilmington on the New Jersey side, in Penn’s Grove.

Other entrepreneurs followed his lead en masse. By the late 1800s, Philadelphia had become the “caviar capital of North America,” and fishermen in river towns like Port Penn were chasing the old dinosaurs with reckless abandon. In 1897, sturgeon once valued at 25 cents apiece were fetching a price of $30.

Nowhere else in the whole annals of commercial fisheries is there a parallel to this case of the sturgeon, rising as it did in less than a quarter of a century from a fish despised and ruthlessly destroyed to the highest rank of commercial value.

This turn of events did not end happily for the sturgeon population. The fish were nearly exterminated from our area. They remain quite rare today, though a good number of scientists are working to try and help boost the population to a more sustainable level in the rivers of both the Chesapeake and Delaware bays.

I can’t resist leaving you with one last sturgeon scene here, which comes from a late 19th-century piece by a writer named James Fennimore. Imagine yourself aboard a steamboat named Sally on the Delaware River:

On each side, near her bow, were two large round windows which in the summer time were often open. One day when the Sally was on one of its trips up the river, a large sturgeon, in jumping, made such a leap that it passed clear through one of these windows and landed in the vessel, where it was killed.

There is lots more in this chapter of Eastern Shore Road Trips #2. The trip wanders Route 9 from up in Delaware City through the Augustine Wildlife Area, the Thousand Acre Marsh, Port Penn, Augustine Beach, the Cedar Swamp Wildlife Area, Woodland Beach, and on to either Bombay Hook National Wildlife Refuge or into the town of Smyrna. Happy travels!